There is a sharp contrast between the moderate recovery in the British economy, which is now entering its second year, and the continued contraction of the economy in ‘Northern Ireland’. Current British government policy and the entire structural relationship with Britain continue to exacerbate those negative trends.

There is no timely official data for the economy in the North that corresponds with the official data for Britain. But the Ulster Bank, a division of RBS, produces monthly PMI surveys for the Northern economy . Surveys of activity by purchasing managers are an internationally reliable method of gauging activity in the private sector. The Ulster Bank output PMI in the North fell again in November 2010, at its fastest rate since April 2009. As the chart below shows, the private sector of the economy has been contracting continuously since the beginning of 2008. Surveys of new business orders and employment have fared even worse. 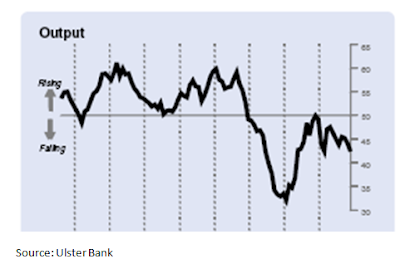 This extended recession in the North is now 12 quarters old, compared to six quarters for the British economy. It is not only now still turning down, but has also been far more severe, as shown in Chart 2.

Owen Patterson, the Tory Northern Ireland Secretary recently made the empty boast that: ‘The [government] Spending Review builds on the measures we took in May and in the Budget in June and will ensure that this country is set firmly on the path to sustainable economic recovery and financial solvency’.

Whichever country he was referring to, the British colony in the North of Ireland was not one of them. With the private sector mired in a much worse recession than in Britain, the Tories’ answer is to cut government spending too. Even worse, the attack on living standards is greater than almost anywhere else. The IFS has conducted research into the ‘regional’ impact of the cuts to benefits and tax changes arising from the Labour Budget of March 2010, as well as the Tory Budget of June 2010 and the Comprehensive Spending Review. It finds only London is more badly hit than the North of Ireland. 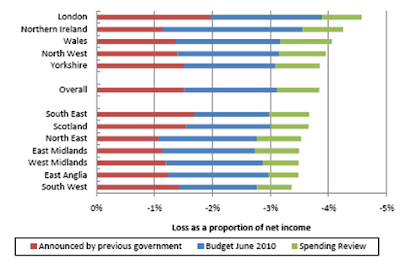 In addition, the poorest sections of the community within the North of Ireland will be hardest hit. As the IFS chart below shows, the poorest are much harder hit by the policy changes than the rich. In addition, in both cases, the Institute for Fiscal Studies (IFS) does not include the impact of changes in services, which of course hit both the poor, and poorer geographical areas harder. In total the effects are much worse than these aspects of taxes and benefits highlighted by the IFS.

Chart 4. Impact of Tax and Benefit Changes 2010-2015 by Income Group In North of Ireland 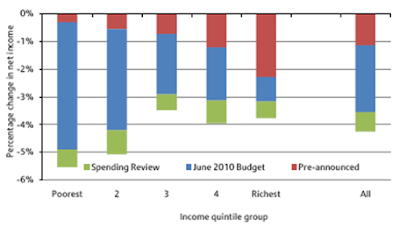 The British government is deepening the economic crisis in the North of Ireland, and its attack is focused on the poorest sections of the population.

The Scottish and Welsh Assemblies have already agreed their budgets with Westminster. This is not the case in the North of Ireland as Sinn Fein has opposed the imposition of £4bn in cuts. The Unionist parties and the SDLP were initially willing to accept the cuts. But Sinn Fein’s opposition has forced a repositioning. The campaign has focused on £18bn of investment promised for the North in the St Andrew’s Agreement, which has not been delivered. Sinn Fein has also attempted to build support directly for raising revenues to protect services and support investment, including an ongoing campaign for the repatriation of tax and spending powers which is increasingly popular and supported to some extent by Unionist parties.

It is widely expected that there will be an early general election in the South of Ireland in the first few months of 2011. A key task will be pressing any new Dublin government to insist that the British government meet its £18bn investment commitments, as these were made under international Treaty obligations between two governments. Along with local revenue-raising measures, even a phased introduction of the £18bn would have a powerful antidote effect to the private sector recession and government attacks on living standards.

Even so, this increased investment could do little more than off-set the cyclical effect of the recession and the government attacks. Comparative studies have shown the much lower effectiveness of investment in the North of Ireland than in the South.

From the late 1980s onwards, similar levels of EU investment in both parts of Ireland have produced hugely different outcomes. This is because the North is not at all integrated into the world economy. Participation in the global economy through the international division of labour raises the effectiveness of investment. “Northern Ireland’s” status as a colony of Britain cuts it off from the rest of the world economically- exporting little and importing less.

In this conjuncture, opposition to the cuts and campaigning for increased investment is entirely correct. Otherwise, the Tory-led government would be allowed to degrade the economy of the North of Ireland at a far greater rate even than in Britain. But strategically, the only route towards prosperity for the whole population of the North of Ireland is by breaking the link with Britain.