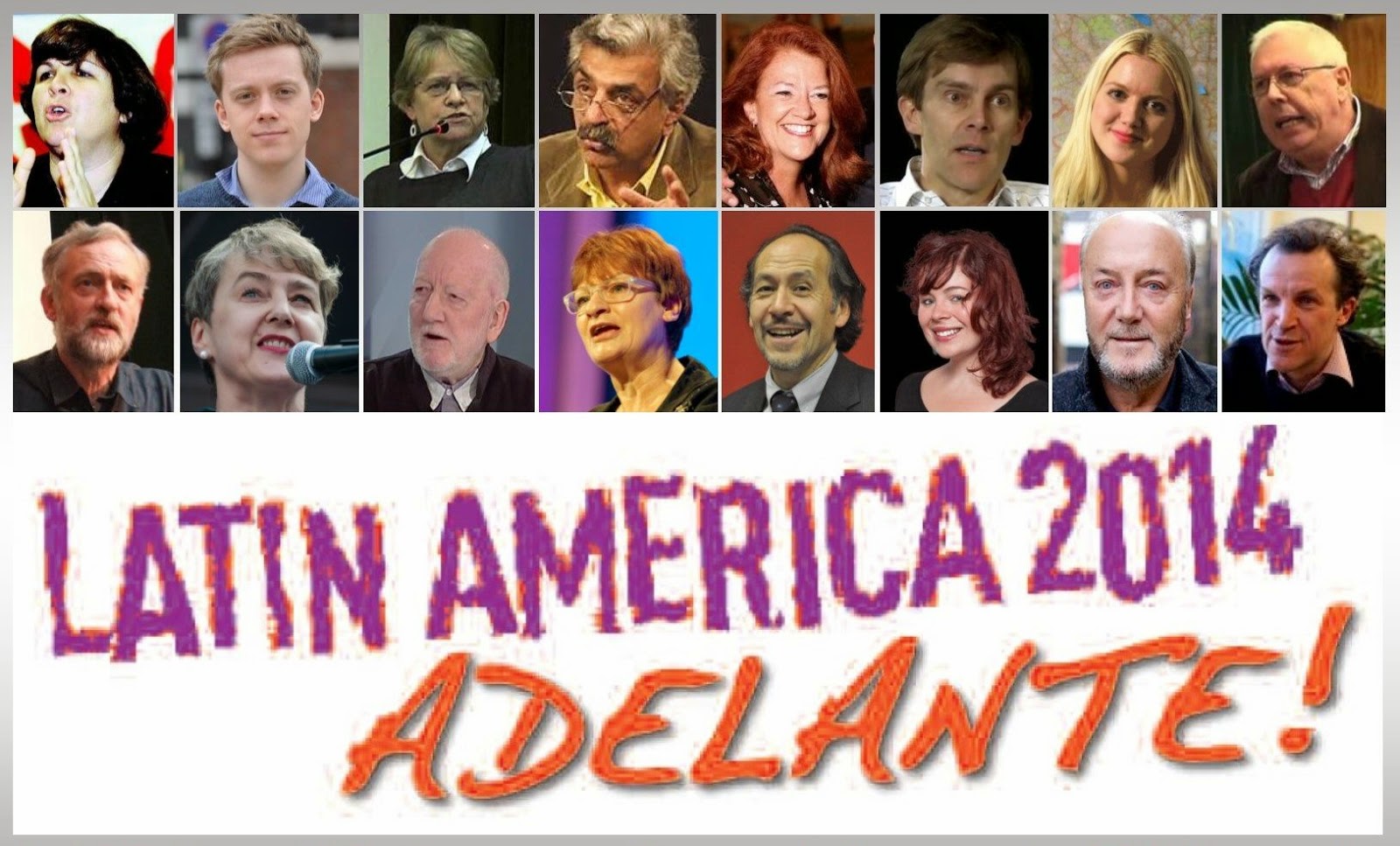 And films, stalls & discussion on topics such as:
• Cuba: building a better world under the eye of the empire
• After Chavez – the Empire strikes back in Venezuela
• Nicaragua, 35 Years on – the second Sandinista Revolution
• For Peace, Development & Progress – the new Latin America in the World Today

The main factors that account for economic growth are increases in the workforce or in the amount of productive capital in the economy. A far smaller contribution is made by improvement in productivity as a result of innovation, which is known as Total Factor Productivity.

Since mid-2009 the British economy has grown. But this is wholly accounted for by growth in the workforce, which made up of both an increase in the number of people in work and in the number of hours they work. As a result the average person in work cannot experience any improvement in living standards as economic growth is simply made up of more people working longer hours. Worse, those on very high pay, senior executives and shareholders, have claimed any benefits of that moderate growth in the British economy. Average real pay continues to decline.

NFCF therefore measures the addition to the accumulated stock of capital. (Unfortunately it also mixes together productive capital, such as machinery, with unproductive capital such as housing, but this failing cannot be addressed in this piece). The chart also shows the contribution to NFCF from each sector, non-financial firms, financial firms, government and households. 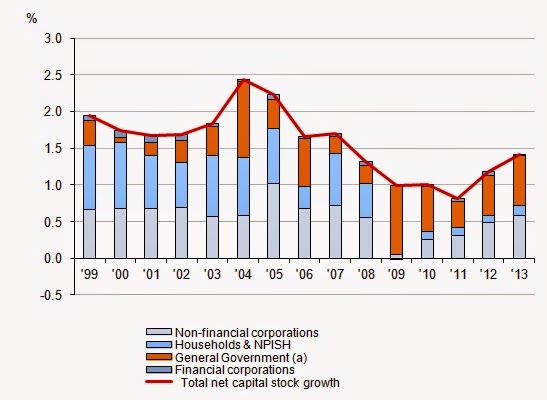 The data is worth examining in detail. The net contribution of financial firms can be disregarded as it is negligible in all cases. But it is also clear that the contribution of non-financial corporations (NFCs), i.e. private companies, has been far from overwhelming. 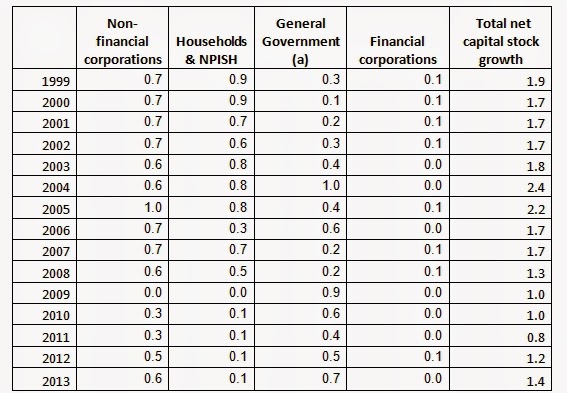 In most years before the crisis the net contribution from non-financial firms was matched or surpassed by the contribution from households (and the non-profit sector NIPISH). The strongest year for the net growth in the capital stock was 2004, when the greater role was played by government and non-financial firms contributed just one quarter of the total growth. But this increase in government spending encouraged the private sector and the following year saw an increase in the contribution to NFCF by private firms. But from that point onwards until 2009 government NFCF was once again reduced and in turn, with one year time lag, companies duly cut their own level of investment. With a time lag, companies also followed when government increased its investment again after 2008. Yet non-financial firms never contributed as much as half of the net growth in the capital stock in any year over the period.

The coalition government has been claiming that it has overseen a revival of the British economy, including business investment. But the total proportion of NFCF is barely changed from the crisis year of 2008, along with the contribution from non-financial firms. In reality, it was the modest increase in government net investment in 2009 which rescued the economy and has been responsible for well over half the growth in net investment since. Non-financial firms have contributed less than a third of the NFCF over the same period. Yet the Coalition cut the level of investment it inherited from Labour and has only increased it modestly to avoid the political consequences of a renewed recession.

Over the longer-term Britain has a very low level of net capital formation, less than 2.5% of GDP at its recent high-point, which condemns the economy to slow growth. Even among the Western economies that have experienced a decline in growth rates over the medium term, Britain has had one of the lower levels of NFCF. It is notable too that the US has among the weaker levels of net investment growth since 2006, which belies notions about a US industrial renaissance. 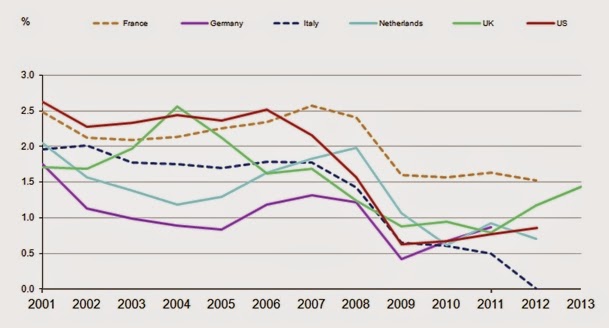 Unfortunately, the Thatcherite and Reaganite notion of the ‘state getting out of the way of the private sector’ still dominates thinking in most Western economies. This turns reality on its head. Private firms are an important but minor player in the growth of the net stock of capital. They are led by the activity of the government. This was decisive during the crisis and there is no prospect of a return even to previous levels of British growth if it is mainly dependent on the contribution of private firms. The austerity consensus remains that government must cut back while we await the decision of private firms to increase their investment. This will condemn the economy to prolonged stagnation.

The source of the current crisis is the unwillingness of private firms to invest. Instead, they are hoarding cash that could otherwise be invested. The latest data shows that this cash hoard stood at £501.9 billion at the end of 2013. It has almost certainly risen since.

The latest ‘flow of funds’ data from the Office for National Statistics (ONS) provide comprehensive data for the financial flows between each sector of the economy. They show how the cash mountain has been created. Via the banks, these data show how the incomes of firms (mainly profits) or of individuals (mainly wages) can become savings and may be used for investment.

If a capitalist economy is functioning in the textbook manner, firms will generate profits which they use for their own investment. Through bank borrowing they will also be able to use the savings of private individuals to supplement that investment. It is the supposedly efficient and large-scale way that this takes place that gives the capitalist economy its particular power, and the pre-eminence of the private sector within that, including the banks.

But this is not what is happening in the British economy. The ONS chart below shows the savings and investment levels private non-financial firms (all private corporations excluding banks, insurers and so on, or PNFCs). These are shown from 1997 onwards as a proportion of GDP.

Fig.1 Net lending and investment of PNFCs as a proportion of GDP 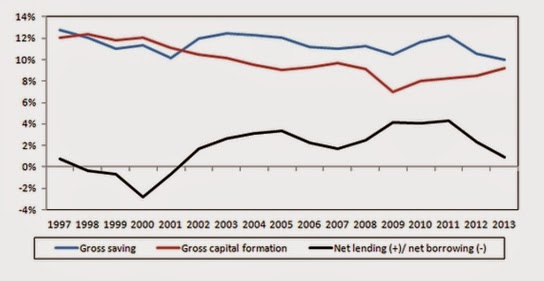 Over a prolonged period from 2001 to 2013 private firms in Britain have been net savers. Far from borrowing from another sector such as households (or from overseas, or government), private firms have been saving not borrowing. The peak level of this net saving was 4.3% of GDP in 2011. The recent high-point for firms’ borrowing was a not very high level of 2.8% of GDP in 2000. The difference between those two levels is 7.1% of GDP. This is significantly greater than the actual annual contraction in output during the recession and entirely accounts for it.

At the same time private firms have been cutting their levels of investment. Firms’ productive investment (Gross capital formation) peaked at 12.4% of GDP in 1998. It fell to 7% at the low-point of the recession in 2009, and the rebound since has only been to 9.2% of GDP. This is actually below the level of capital consumption in the economy (the capital consumed in the course of production). As a result British firms are not net producers of capital.

It is the savings of private frims which have produced the cash mountain. The growth of the cash hoard is shown in Fig.2 below both in terms of billions of pounds and in propprtion to GDP. 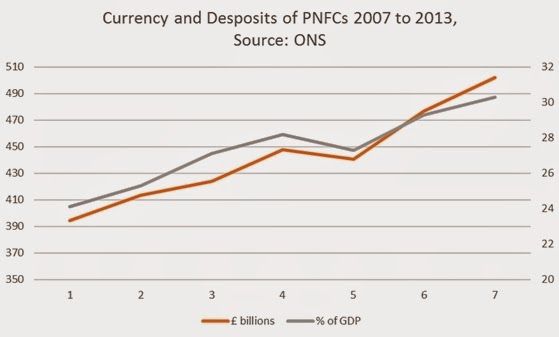 A number of reasons have been advanced for the growth in the cash mountain, including increasing complexity of global supply chains, greater uncertainty and other factors. They are generally unconvincing, not least because the growth in the cash hoard has coincided with both record shareholder returns and senior management rewards.

Companies in Britain and in the Western economies generally are content to retain or even increase high debt levels in order to fund share buybacks and extraordinary boardroom pay. They are not prepared to invest even their own profits, much less borrow to invest.

The cash hoard is directly related to profitability. Firms will not invest while they do not anticipate sufficent returns on that investment. As a result, the cash hoard will grow until they do.

Yet it is clear that the idea that ‘there is no money left’ for investment is false. The money is simply in the hands of those who refuse to invest it. What is required are measures that will wrest it from them in order to fund investment.