.221ZFairytales from the OBR, nightmare for the populationBy Michael Burke

The Office for Budget Responsibility (OBR) has come under fire from across the political spectrum following publication of its latest report accompanying the Chancellor’s Autumn Statement.

The economics editor of the Financial Times Chris Giles says there ‘is not a shred of credibility’ to the OBR forecast that the unemployment rate will fall to 7.1% at the beginning of 2014 and stay there for over a year. As the Bank of England has identified 7% unemployment as the threshold for possible interest rate increases, without much conviction. But there is clearly a political merit to forecasting 7%-plus unemployment, if no logic. It certainly saves George Osborne from having to explain why interest rates could rise even before the economy has recovered its pre-recession level.

Among opponents of austerity, the anti-poverty and tax campaigner Richard Murphy says the OBR’s assumptions resemble George Osborne’s ‘wish list to Santa’. James Meadway at the new economics foundation argues that both the OBR and Osborne will not reveal the true dynamic at work in the recovery which is rising consumer debt and the reflation of a property price bubble centred on London.

The OBR admits it has a poor forecasting record. This is hardly surprising given that it uses the Treasury model of the economy. In all the arcane debate about ‘multipliers’ (the cumulative economic effects of government spending) a central truth tends to be obscured. The highest multiplier admitted in the Treasury/OBR model is just 1. This implies that no area of government spending can add to growth at all. Since the private sector has no magic wand to render its own investment in bridges, housing, railways or education more productive than government, then logically it is impossible for the economy to grow at all. The long-term decline of the British economy has been given an official rationale.

However an examination of the OBR forecasts is revealing about the real dynamic at work in the economy.

How bad will it get?

According to the OBR over the next 5 years jobs and wages will grow and the unemployment rate will fall. These central forecasts are shown in Table 1 below (excerpted from the OBR’s Table 3.5 of OBR data here).

Consequently average earnings (the growth of wages and salaries divided by the number of employees) will stagnate or even fall in real terms. Measured against the CPI the OBR forecasts average earnings will return to 2011 levels only at some point in 2016. Measured against the RPI, which takes housing costs into account, real wages never recover over the forecast period.

Even this scenario seems unlikely. In a stunning reversal of both pre-recession trends and the entire aim of austerity, the OBR is forecasting is that the lion’s share of the recovery will go to labour, not to capital. Table 2 below shows the distribution of the growth in nominal GDP over the next 5 years (table attached to Chart 3.20 of OBR data).

Labour’s share of national income has been declining on a trend basis since the 1970s. The purpose of austerity is to reverse the natural fall in profits from a recession as sales fall but cost are unchanged or even rise (including the cost of labour). Yet the OBR’s forecast of flat or falling real wages is based on labour maintaining its share of national income or even increasing it. 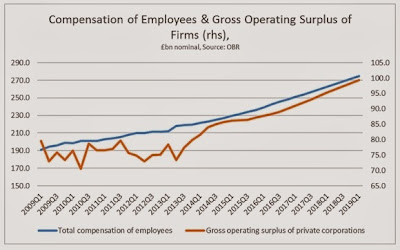 It is also accepted that the primary source of the OBR’s repeated over-optimistic forecasts have been its projections for rising business investment that have failed to materialise. Yet once again the OBR is projecting a rise in the expenditure of firms in plant, machinery, building, transport equipment, and so on.

Previously, SEB has shown that the investment rate (investment as a proportion of profits) of British firms has declined markedly over several decades. The OBR forecasts that profits as a proportion of GDP will peak in the second half of next year at close to current levels and that they will then gradually decline. Despite this, according to the OBR, business investment will rise dramatically at the same time, from a new low of 7.6% of GDP in the 3rd quarter of 2013 to over 10% of GDP by the beginning of 2019.

These trends and the OBR forecasts are shown in the Chart 2 below. 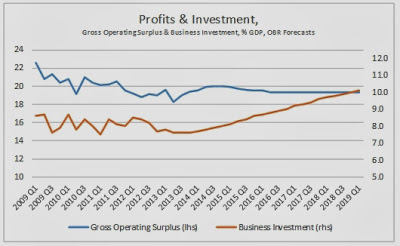 Economic forecasting is always uncertain. But the notion that businesses will substantially increase their rate of investment while profits trend lower is fanciful. Businesses do not invest because it is socially necessary or even because the economy is growing. GDP has been rising since mid-2009 and business investment has been falling. In a market economy investment is driven by the return on it, which is profits.

In reality there are only two main trajectories for the economy while austerity remains in place. The first possibility is that the OBR’s assumptions about flat or falling real wages prove wrong and wages are driven down much further to boost profits. In that circumstance investment can rise if profits rise first. The alternative is the current pattern, where neither profits nor investment have recovered and a snail-like recovery takes place driven by increased borrowing to finance consumption.

There is a third variant, which breaks from austerity. This would see the state leading an investment based-recovery using its own resources and those of the private sector to boost growth and productivity, create well-paid jobs and so allow the sustainable funding of a decent social security system.

Unfortunately, without this radical change in policy, the fairytales from the OBR are likely to be a nightmare for the overwhelming majority of the population.