The campaign to prevent Londoners knowing they will be £1,000 better off with Ken Livingstone as Mayor

During the last month an extraordinary media campaign has been waged to attempt to persuade Londoners that the main issue which confronts them at the election for Mayor is not how much they, that is Londoners, will be better off with either of the two candidates for Mayor – that is which candidates policies will best protect Londoners living standards from the effects of the economic downturn. Instead, in circumstances when most Londoners are facing the most difficult economic times they have ever experienced, the main issue confronting London is supposed to be the personal tax arrangements of candidates.

What is the purpose of this frenetic campaign? It is to attempt to divert Londoners attention from knowing that most of them will be £1,000 or more better off with Ken Livingstone, due to his fares reduction and other policies, and that they will be £1,000 or more worse off with Boris Johnson. To check these figures, and to calculate how much you would save personally yourself, simply go to http://www.betteroffcalculator.com/.

Why is such a strange campaign waged? Evidently because if Londoners realize that they will be £1,000 or more better off with Ken as Mayor then Ken will win the election easily. The only way to try to prevent them knowing this to attempt to make a great noise about something else to try to distract attention from this fact.

As it happens the reality on the tax, as the published figures show, is Ken Livingstone has paid 35% in tax and Boris Johnson 40% – as Boris Johnson earned eight times as much as Ken Livingstone if he didn’t pay a higher rate there would be something wrong with the tax system! But the whole issue, whatever happens, leaves Londoners not one penny better off.

Ken Livingstone has four weeks to make sure Londoners know they can be £1,000 or more better off if he is Mayor. The media supporting Boris Johnson, by campaigning on tax or any other issue they can think of, has four weeks to attempt to prevent Londoners knowing they can be more than £1,000 better off with Ken as Mayor and £1,000 worse off with Boris Johnson.

Which of these two campaigns is successful will decide the outcome of the Mayoral election.

Calculate how much money you will be better off by if Ken wins on 3 May – for readers in LondonKen Livingstone’s campaign for Mayor of London has published a calculator which allows you to find out how much better off in money terms you will be if you live in London and Ken is elected Mayor on 3 May. You can calculate the result for yourself here. Why not find it out for yourself and encourage those you know to also find out? If you want to pass on the link it is http://www.betteroffcalculator.com/ 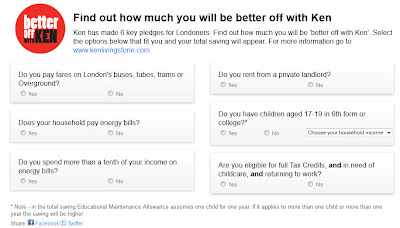 yesCalculate how much money you will be better off by if Ken wins on 3 May – for readers in London
John Rosshttps://www.blogger.com/profile/08908982031768337864noreply@blogger.com0