Why More ‘Austerity’ Is On the WayBy Michael Burke
The latest monthly public borrowing data, which show a large deficit in government finances, have widely been hailed as a ‘surprise’. However, SEB has previously pointed out that the deficit has been widening over the prior six months, so that the latest shortfall in government finances is simply the continuation of an established trend.
More fundamentally, it does not require very sophisticated economic analysis to assume that a renewed contraction in the economy will lead to both higher government spending and lower government tax receipts. Despite higher prices, the nominal level of taxation receipts has fallen since the beginning of 2012, and expenditures have risen. At the very least, the borrowing data should put paid to all the chatter that the GDP data showing economic contraction is somehow wrong . Of course, the GDP data is subject to revision, like almost all economic releases including the data on public borrowing. But it is in practice inconceivable that the economy could be expanding while a significant shortfall appears in government finances. In that sense, government borrowing data are some of the most reliable of all, as they represent real expenditure made and income directly received by the government, rather than survey evidence and estimates of activity in the private sector.

International Experience
If there is any genuine ‘surprise’ from the widening in the budget deficit it is a product of an entirely incorrect framework that assumes that the state is an obstacle to economic prosperity and that removing it will boost output. In fact, the performance of the British economy and government finances in response to ‘austerity’ supports the opposite contention; which is that the state should be the leading force in an economy because it is more efficient than the private sector in developing economic growth. Reducing the weight of the state in the economy therefore damages economic activity.
But anyone who has followed the trajectory of the crisis-hit European economies in the recent period would not at all be surprised by the outcome in Britain. In every case where severe ‘austerity’ measures have been put in place, economic activity has contracted. This has also usually been accompanied by no significant improvement in projections for government finances, and in some cases a deterioration. The table below shows the EU Commission estimates and forecasts for the budget deficits in selected EU economies. It should be stressed that these are the EU Commission’s forecasts (in the Spring 2012 Euro Area Economic Forecasts), and have in the past been subject to negative revisions.

Policy Response
The response to economic contraction and renewed widening in government budget deficits in the crisis countries of the EU is also instructive. In none of these cases has there been a reversal of policy, so allowing growth and therefore an improvement in government finances. Greece and Portugal largely had austerity foisted on them by the Troika of the EU, IMF and ECB. Spain, like Britain, initially had a mildly stimulative policy carried out by governments of the left, PSOE and the Labour Party respectively. However, while this partly reversed the slump it was wholly insufficient to provide economic recovery and they then switched to ‘austerity’ policies. This appeared to the electorate like an inconsistent and illogical zigzag on economic policy and ushered in parties of the right even more committed to an attack on the living standards of workers and the poor.
Ireland was a different case, as its ruling circles are wholly committed to the interests of foreign capital and their domestic agents (in this case, the speculators of Allied Irish Bank and its manly foreign bondholders). Therefore, without any external political impositions, the Irish government moved straight to an ‘austerity’ policy of its own. It later fell into the clutches of the Troika simply because this policy had utterly failed. The Troika then loaded the Irish state with even more debt in order to extend the policy.
Britain is unlikely to be any different and ‘austerity’ will be deepened. Reports of the latest deficit widening had headlines such as ‘Surprise deficit raises risk of more austerity , and ‘Tax slump threatens to set off new wave of cuts’ .
Even prior to the UK borrowing data, a series of business calls had been raised for further cuts in welfare payments in order to provide investment subsidies for firms. The Institute of Directors, the CBI and the British Chambers of Commerce have all been plugging deregulation and tax ‘reform’ as well spending cuts. This is actually an agenda for lower employment rights, safety and environmental standards, as well as tax cuts for corporations at the expense of labour and the poor. That is, a deepening of ‘austerity’.

Questions and answers: Why investment not cuts is keyThe debate on the alternatives to the current failed economic policy of the government has intensified. The renewed downturn in Europe, a British government Budget whose cut in the 50p tax rate underlined the class interests it represents and the slip back into ‘double-dip’ recession have all heightened interest in alternatives to ‘austerity’.

Michael Burke has an excellent new post on the Guardian’s Comment is Free examining UK companies failure to invest and therefore why the state must intervene if the economy is to recover. 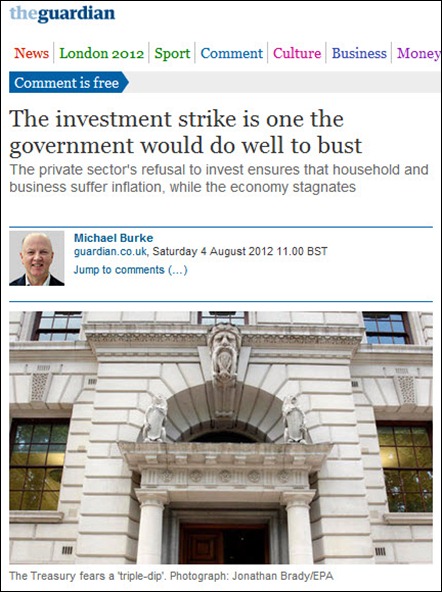 In the last 10 years China’s economy has experienced the most rapid growth in per capita GDP in a major economy in human history. In the same period China has seen the most rapid increase in per capita consumption of any major economy. These are the principle findings of my analysis of the last 10 years of China’s economic history. This shows those who claimed China’s economy faced ‘crisis’ had no contact with economic reality. The data is in the tables below and my analysis is here.