The latest official forecasts for the UK economy show the longest slump on record. But there is official silence on the cause of the crisis, signalling no intention to change course to end it.
Instead, the Office for Budget Responsibility (OBR), the UK Treasury and Chancellor Philip Hammond all hint that slashing growth forecasts over the medium-term is somehow connected to the weakness of productivity growth and this in turn is in vaguely related to the weakness of investment.

In all cases, the cause is the weakness of Investment which determines weak productivity, and the UK is among the weakest because its investment has been among the weakest. The claim that it is instead caused by ‘measurement problems’ of the service sector or other imponderables is belied by the fact that a large service sector is common to all Western economies, yet the UK has badly lagged behind even the G7 average growth in productivity since the Great Recession. Productivity is weak in the G7 because investment is weak, and both are weaker still in the UK.

The Great Depression of the 1930s lasted less than 3 years but was only definitively ended by the war boom in 1940, ten years later. The Long Depression at the end of the 19th century lasted 12 years. According to the official OBR forecasts the Great Stagnation in the UK will last at least 17 years, with living standards failing to recover their 2008 level until at least 2025.

The current crisis is an unprecedented duration of weakness. On reasonable assumptions from the Resolution Foundation, real average earnings will not recovery their 2008 level until 2025. At the same time Government departmental spending will on average have fallen by 16% in real terms between 2010 and 2022. It also forecasts that the current outright decline in living standards will last longer than the fall in the recession, 19 quarters versus 17 quarters. Claims that ‘austerity has ended’ are utterly foolish.

The consequences of such a prolonged depression will be severe. They are already beginning to accumulate. The OBR forecasts for per capita GDP and especially the level of debt would have been worse, except that longevity is beginning to decline. This is almost unprecedented in an advanced industrialised economy in peacetime. Further deterioration is almost inevitable, at least under current policy.

In the Budget, Hammond did suggest that low productivity was linked to low investment. He went further, “The key to raising the wages of British workers is raising investment – public and private. And Mr Deputy Speaker, we are investing in Britain’s future.”

This should all represent progress. Except the last part of that statement is untrue. The Tory government intends to cut public sector investment further.

The level of public sector net investment reached 3.4% of GDP during the crisis under Labour and was instrumental in supporting a recovery. The Tories slashed public investment to 1.7% of GDP in 2013/14 and has only recovered to 2% since. Hammond intends to cut it close to its low-point in the next Financial Year to just 1.8% of GDP and barely increase it subsequently. See Chart 1 below. 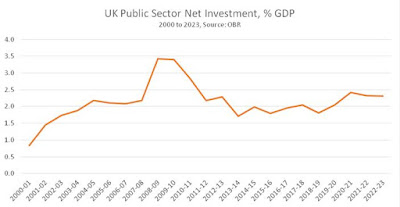 It is important to recall, Hammond and the official forecasters are close to acknowledging that weak investment causes weak productivity growth, and that this in turn lowers the growth of wages and living standards. But the Tories intend to do nothing to reverse the weakness of investment.

As many analysts have pointed out, the big set-piece of the Budget in tackling the housing crisis will encourage no new home building and simply drive up house prices. This is at a cost of £3.2 billion, when 40,000 new genuinely affordable homes could have been built. The Tories have boosted demand for housing without boosting investment. The textbook response is higher prices (or in this case, softening the possible house price fall).

It is a serious mistake to believe the Tory leadership are stupid. Theirs is not primarily a failure of diagnosis. The intention is not to address a crisis whose proximate cause they accept; the lack of investment.

The intention of the austerity policy is to transfer incomes from poor to rich, from workers to companies. The policy’s ultimate aim is to boost profits. This is why, from the Tories’ perspective, the state cannot interfere in the economy by investing on its own account, as this would remove sections of the economy from private sector profitability altogether. The thrust of policy is the opposite, to privatise as much of the economy as possible. In the footnotes to the OBR documents, it seems as if the government intends to sell off its remaining shares in RBS at a huge loss to the public sector, for precisely this reason. The NHS, education, rail and other sectors are all being opened to the private sector.

Under John McDonnell and Jeremy Corbyn, Labour has entirely the correct framework of borrowing for Investment, not for current or day-to-day spending. The latter can be met and even increased substantially by increased taxation.

This follows from the fundamentally correct point that only Investment can add to the productive capacity of the economy. Consumption cannot. Therefore only Investment can sustain growth. Borrowing (and incurring debt and debt interest) for spending without a return was a factor in the Western government’s inability to deal with the end of the post-World War II boom in the 1970s. At the same time, Western governments were divesting assets (privatisation) that had been rescued through nationalisation after World War II.

Rather than make the state more responsible for Investment, the Western governments instead chose to slash current spending, led by Thatcher and Reagan. The verdict is clear. In the 38 years since Thatcher first came to office the economy has grown by 126%. The same accumulated change in growth took place in the preceding 26 years.

Labour’s current economic framework is a sharp break from that past. In effect, to spur recovery, Labour is willing to make inroads into the private sector’s domain by increasing state investment.

However, the question is now posed of what will be the appropriate level of that investment, in light of the official expectations that weak productivity means a permanently lower rate of growth, something more like 1.5% than 2.25%.

The same trends are shown in Chart 2 below. Pubic Investment is forecast to exceed public borrowing at some point in the next few years. 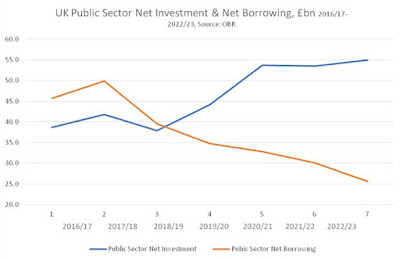 Given how realistically downbeat the OBR now is, and assuming unchanged government policy, only an outright recession could push the cross-over point for public investment and borrowing into the very far future. This means day-to-day or current government spending at some point in the next few years will be more than covered by government taxation and other revenues.

A crucial difference is that Labour would maintain and increase government Investment for growth in living standards. The Tory stated plan is to eliminate borrowing altogether.

At the last election, Labour’s costings manifesto outlined £48.6 billion in taxation and other revenue-raising measures. According to the OBR, it will also a have further £21 billion in 2020 in headroom to increase current spending without having to borrow. To address the real damage to public services and pay, as well as to maintain and build political support for a radical government of the left, then most if not all of this £70 billion spending is likely to be needed.

Therefore at some point all of the new government borrowing will be for investment. The Labour fiscal framework already includes a ‘knock-out’ option, where borrowing on all items of government outlays can be increased if interest rates remain close to zero, which provides flexibility in the face of a recession.

But in light of the official acceptance that growth will now be ‘permanently’ lower, at least lower over the foreseeable future there is room for reconsideration of the borrowing targets for investment. The National Investment Bank and Infrastructure Commission should both have as their mission statement the ‘permanent’ raising of the productive capacity of the economy.

This may well require going beyond the current commitment to borrow £25 billion in additional funds over each of the next 10 years to fund investment. Even if the private sector matches this increase, there will still be a requirement for prolonged rate of much higher Investment to return even to the previous growth path.

The Tories are likely to bequeath Labour an exceptionally weak economy. Labour’s fiscal framework already allows the correct focus on government Investment. At the same time, the effects of severe austerity and Labour’s own tax plans already mean there is will soon be plenty of scope to increase government Consumption (current spending) without increasing borrowing. But to deal with the severity of the Great Stagnation under current official forecasts, much greater increased in borrowing for Investment may be needed.