If this is a recovery, why are we getting poorer?By Michael Burke

At a certain point this year GDP will finally recover its pre-recession peak, 6 years or more after the recession. This will be the longest British slump in living memory and the most severe downturn since the Great Depression.

The government and supporters of austerity are keen to emphasise the fact that the economy is growing. The latest piece of supportive commentary comes from the IMF, which is projecting 2.9% GDP growth for the British economy in 2014, the fastest growth projected for any G7 economy.

Politically this is entirely understandable. Yet the problem remains that support for the Tory Party continues to flat-line at around the low 30s as a per cent of the opinion polls. Economically this reflects two different forces at work in the economy.

The economy is expanding at a very moderate pace, especially in light of the depth of its previous slump. But the majority of the population are continuing to experience a decline in living standards. Logically, it follows that as total output is growing, a minority must be experiencing a rise in living standards.

This is exactly what is happening currently. This widespread disaffection with or hostility to the government is fuelled by the general decline in living standards. The minority bedrock of support for the Tory party currently is cemented by a rise in living standards for a certain proportion of the population.

The chart below (Figure 1) shows the level of per capita GDP and Real Adjusted Household Disposable Income (RAHDI). RAHDI takes into account all the income of households, interest, rent, and social security as well as wages, after inflation and direct taxes are deducted. It is adjusted for the change (reduction) in public services.

While GDP per person peaked at just under £25,500 in 2007, RAHDI continued to grow and even in 2010 it was still above the 2007 level. That is, wages and benefits grew a little in the first part of the recession and taxes did not increase. The effect of the austerity policy is to push down both wages and social security entitlements so RAHDI fell continuously from 2010 onwards and it fell again in 2013. 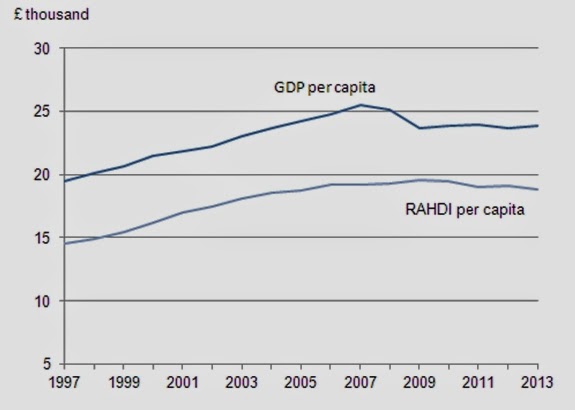 Yet the ONS also reports that real household wealth has risen by £1,560 billion between 2007 and 2012, reflecting the rise in financial assets such as stock markets as well as the rise in home prices. This is an increase in financial wealth equivalent to one year’s GDP in Britain in the space of just 5 years. A further rise seems certain to have taken place in 2013.

This increase in financial wealth (shown in Figure 2 below) has occurred at the same time as living standards for the majority have fallen, as measured by RAHDI. The dual effect is a function of government policy in which VAT has risen, public services have been cut and public sector pay and pensions been cut in real terms, while the corporation tax rate has fallen from 28% to 20% and there are innumerable schemes to subsidise consumption, most notoriously ‘Help to Buy’ which has fuelled a further overheating of house prices. Only owners of two or more homes have any direct interest in rising house prices. 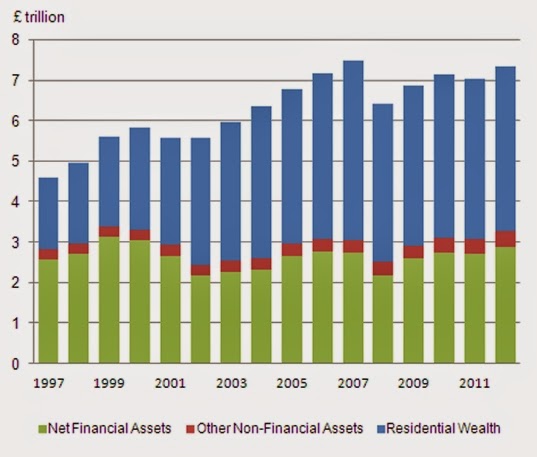 While this situation has highly negative and potentially dangerous economic consequences, the current dynamic in the British economy does serve to illustrate an important point about economic theory, with immediate and significant consequences for the incoming Labour government.

There is no such thing as ‘consumption-led economic growth’. Economic growth is a function of the amount and quality of the capital and labour deployed, as well as some contribution from technological change (‘Total Factor Productivity’). As consumption is not an input to growth, it cannot ‘lead’ it.

Most of the population is currently experiencing falling living standards while GDP is edging higher. This is because the main component of growth is consumption. This is shown in Figure 3 below.

In the latest data for the 4th quarter of 2013 GDP is still just over £22bn below its pre-recession peak. The only major expenditure component of GDP which is still significantly lower is investment (Gross Fixed Capital Formation). Investment is nearly £51bn lower. By contrast, government spending and net exports are both higher than when the recession began and household consumption is just under £7bn below the pre-recession peak. Consumption, including consumption by government has recovered. Household consumption by itself will recover at some point in 2014. 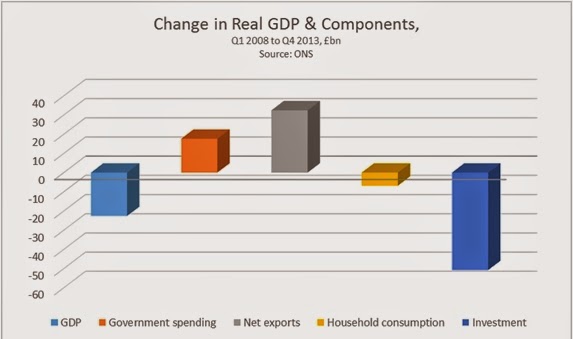 At the most fundamental level all output can only either be consumed or it can be saved for investment. If output stagnates and consumption grows this can only be by reducing investment. Borrowing to consume simply postpones the reduction of investment in exchange for increased current debt.

This also explains why the current dynamic in the economy cannot be sustained. The accumulation of debts to finance consumption cannot continue indefinitely. The debt will be regarded as unsustainable either by the borrower (currently households) or by the lender (banks or their credit card companies).

In Figure 4 below the contribution of private non-financial firms (PNFCs) to the development of the economy’s productive capacity is shown. The red line shows their level of investment (GFCF). The blue line shows their level of capital consumption, which is used up in the production process, through consumption of machinery or equipment, wear and tear and dilapidation. The net contribution is the difference between these two, which could also be regarded as the Net Fixed Capital Formation (NFCF), after taking account of capital consumption. 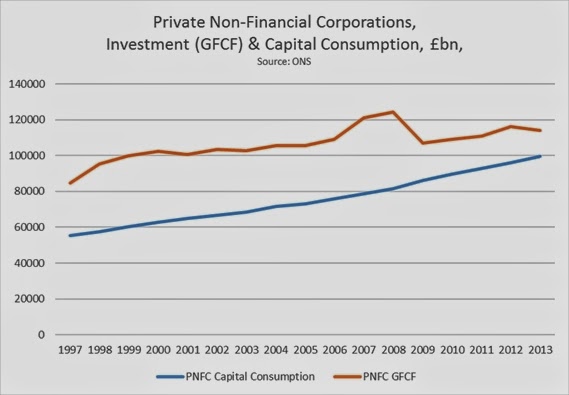 The ideology that private sector will deliver prosperity is evidently false. The policy of government ‘getting out of the way’ of the private sector is manifestly a failure. Cutting corporate taxes and attempting to finance them by government spending cuts (or increased VAT) has simply led to a debt-fuelled upturn and a net decrease in firms’ investment. The increased reliance on consumption and decreasing role of investment is making most of the population poorer.

To prevent absolute declines in GDP in the near future, net investment (NFCF) must rise. That requires an outright increase in investment. Yet the private sector is clearly unwilling to do this. Therefore only the state can play the leading role in providing the necessary investment that can alone lead to prosperity.

The Campaign for Nuclear Disarmament has produced a new pamphlet, People Not Trident. It argues against the colossal waste of funding needed to a replace the Trident nuclear weapons system. It makes the case that the £100bn saved could be used to invest in a whole host of sectors, housing, education, international development, the switch to renewable energy, and so on.

The full pamphlet can be downloaded here (pdf).

Almost no area of government spending has been spared from the axe of austerity. Housing, health, education and social security payments have all been cut. Pay and pensions, public sector jobs, even support for people with disabilities have all been hit.

Yet the one important exception to this is the government’s commitment to the replacement of the Trident nuclear weapons system. Yet the total cost of replacing Trident amounts to £100 billion.

To put this in context, £100bn on replacing Trident is approximately equivalent to a full year’s public sector deficit, on current performance. 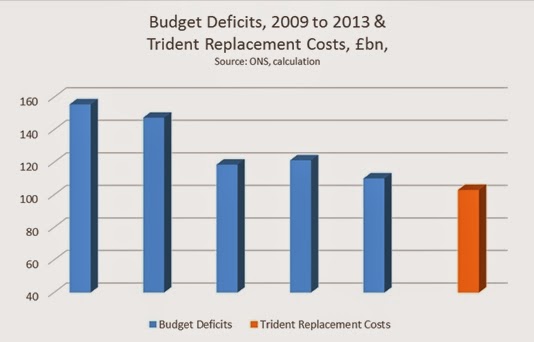 In the most recent Financial Year the underlying deficit[i] was £110bn. Yet the proposal is to spend £100bn on replacing Trident – almost exactly equivalent to a single year’s budget deficit. This is despite the fact that the stated aim of the Coalition has been to reduce that deficit.

A wide variety of organisations, campaign groups and activists (including the current author) have contributed to the pamphlet to show what could be done with all, or even a fraction of the £100bn that would be wasted on replacing a weapons system of mass destruction,.

Crucially, investment in all these areas has a beneficial spin-off on output in other sectors, on prosperity and on jobs. In the jargon these are known as the ‘multiplier effects’. By contrast, Trident and its possible successor has none of these effects. The economic effect of nuclear weapons systems is a fraction of the initial outlay. This is because immensely high-tech equipment such as this can only be used in the event of global nuclear conflagration. It cannot be used to improve economic activity.

Only a government which wanted to intimidate the rest of the world would waste £100bn in replacing an unaffordable nuclear weapons system. A government committed primarily to the well-being of its citizens would not even consider it.

[i] These data are for underlying deficit. In line with Office for National Accounts practice they exclude two important accounting items; changes to the treatment of the Royal Mail Pension Fund and the impact of the purchase of UK government securities by the Bank of England