The Brexit negotiations are entering a decisive phase, with leading UK business organisations saying they will not invest and must consider whether they relocate if there is no agreement on a transition phase and there is clear progress on trade talks. For its part the Tory Cabinet is deferring any discussion on its key aims for EU trade talks, despite the pretence it is clamouring for them to begin. Any decision on the desired new relationship with the EU would probably lead to Cabinet splits, so discussion is being avoided.

The potential damage to the economy and living standards can be gauged in terms of jobs. Chart 1 below shows the number of UK jobs that are directly dependent on exports. In OECD jargon, these are the totals of ‘domestic employment in the UK embodied on overseas final demand’. 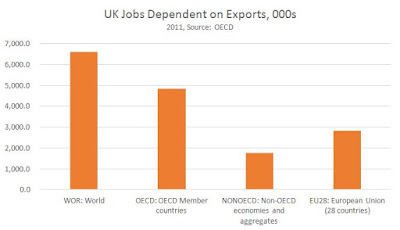 There are 6.6 million UK jobs directly dependent on exports. The total could be far larger including jobs indirectly dependent on exports. OECD member countries account for 4.8 million of the jobs total, non-OECD for the remaining 1.7 million (numbers do not sum due to rounding). This is 2011 data, the most recent available and has probably grown since (for reasons discussed below).

Separately, the EU directly accounts for 2.8 million of the total. As elsewhere, this is only the direct total not including indirectly-supported jobs and has also probably grown since. Furthermore, through the EU the UK currently has some type of ‘free trade’ deal with between 50 and 60 countries. In reality, these deals are for lower tariffs and non-tariff barriers than would otherwise apply through World Trade Organisation rules, without being in the tariff-free regime of the Single Market.

The effect of leaving the EU Single Market would be threefold. First, any new tariffs or non-tariff barriers between the UK and the EU would raise prices of production that would lead to higher prices overall. Producers may try to mitigate these by lowering UK wages and relocating jobs to within the Single Market area. A relatively small increase in these barriers or tariffs may lead to a much larger fall in wages/loss of jobs. A car manufacturer’s profit margin may be, say, 10% but as the tariffs on components range from just under 3% to 10% for complete cars, this would be a large part of total profits, or all of it. The incentive to drive down wages and/or relocate would then be very great.

Secondly, similar considerations would apply to all those countries where the UK currently has a trade deal via its membership of the EU. They too would want to lower costs with lower wages and/or consider relocating. In addition, simple calculations about the respective size of markets may also prompt relocations from the UK to the Single Market area.

Thirdly, these various trade deals usually contain little or nothing at all about trade in services. Services tend to be more thorny issues, not least because freer trade in services means more liberalised immigration regimes, as services are essentially about people (finance, accountancy, law, education, and so on). Yet it is in the services sector where the UK economy has a clear advantage, and currently benefits from the highest level of liberalisation in the Single Market. In 2016, UK exports of services accounted for one quarter of total exports.

Brexiteers argue that the EU is one of the slower-growing regions of the world economy. This is correct. But nothing in Brexit will raise the level of exports or the jobs that depend on them. Table 1 below shows the growth in employment by exports from regions and countries from 1995 to 2011 (the full range of the OECD data).

Table 1. Growth in Employment Dependent on Exports, by Region and Country, 1995 to 2011 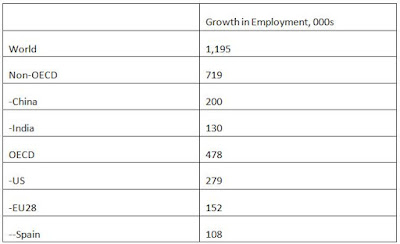 Source: Calculated from OECD data
In common with many other countries, the UK has an increasing proportion of jobs which are dependent on exports. This reflects the continuing growth in the international division of labour. This is despite the fact that the UK’s low investment and productivity rates mean that the growth rate of export-dependent jobs is lower than many other industrialised economies.

Total UK direct employment dependent on exports rose from 20.9% in 1995 to 22.5% in 2011. This is a concrete measure of the growth of the international division of labour, or what Marx termed the socialisation of production. In key sectors the change has been dramatic, so that in 1995 roughly half of all employment in the machinery and equipment sectors was dependent on exports, by 2011 it was over 70%. For transport equipment (including cars) employment rose from just under half to more than two-thirds.

The two most important non-OECD countries in terms of creating jobs in the UK are China then India. Within the OECD bloc the US and then the EU itself are the areas creating the greatest number of UK jobs. Within the EU28, Spain has been the most important country for UK job-creation. The UK’s much lower level of competitiveness means it is not gaining German, French and other export-related jobs. Together these four, the US, China, India and the EU are responsible for more than 700,000 new UK jobs in the period 1995-2011, or 60 per cent of total new directly export-related jobs.

In Trumpenomics there is a reactionary idea that freer trade arrangements such as NAFTA have destroyed US jobs. In reality, the US has added about 1 million jobs based on exports to Canada and Mexico since 1995, a year after NAFTA came into force. Unfortunately, this type of crude mercantilism has much wider support than Trump and his delusional supporters. It is expressed as the idea that that the growth in imports exceed the growth in exports, then the decline in net exports is economically detrimental.

But the growth in the international division of labour/socialisation of production represented by rising trade both increases jobs and their productivity, so raising living standards. As Adam Smith pointed out, if coal is produced in Newcastle and then it is used in smelting, the citizens of Newcastle may buy the metal products with the proceeds of their coal production. This is true whether the smelting takes place in Aberdeen or Amsterdam. In either case the smelting operations create jobs in Newcastle.

A withdrawal from the Single Market would go against the tide of economic development and current international practice. It would unilaterally replace a tariff-free regime with new tariffs and non-tariff barriers. It would therefore cost an unknown but large number of UK jobs.

In a textbook case of political projection, the UK economy continues to stagnate and the response of the Tories and their supporters is to create scare stories about an economic impact of a Corbyn government.

This is clearly a mark of political desperation. Having presided over the longest recorded fall in living standards, the government’s inability to lead an upturn means it is reduced to blaming the last Labour government and the next one for its own failings. Even thoughtful commentators such as Martin Wolf at the FT accuse Corbyn of ‘populism’ and ignoring the realities of a private sector-dominated economy.

But there is a serious point buried deep beneath the Tories’ wild claims. There are always constraints, which cannot be overcome with airy declarations that Labour can just print money. An incoming Labour government under Corbyn will face stiff opposition from its ideological opponents outside the Tory party, including the City of London. The pressures on the Wilson-Callaghan government were so great, even though circumstances were in many ways far more favourable and Labour was attempting only modest reforms, that they eventually capitulated and precipitated an entirely fake ‘IMF crisis’ in 1976 in order to slash public spending.

In the early 1970s the UK was not faced with a crisis of public finances. The real crisis was of profitability and therefore investment. In the current crisis, the public sector deficit as a proportion of GDP has averaged more than double the deficits of the 1970s period.

The real policy target was addressing the real problem; falling profitability. In common with other Western economies in the early 1970s, UK profitability fell, signalling the end of the long post-World War II boom. In the UK, highly unusually the total level or mass of profits fell outright in 1974. Slashing public spending and capping pay was the now-familiar policy adopted in response.

The scare story used then was that the country would be bankrupt if it could not borrow from overseas. A variant on this mechanism was actually used in the EU financial crisis, as the ‘Troika’ of IMF, European Central Bank and EU Commission. In the case of Greece, the Greek bank system was starved of funds by the ECB in order to impose austerity on the government.

The Labour leadership under Corbyn and McDonnell has already set itself a number of useful tools to cope with an economy that will have suffered both sharp recession and prolonged slow growth. In the first instance is borrowing for Investment, which leads to economic growth, while balancing current spending on Consumption, which does not. (Contrary to wild claims, this does not mean adopting austerity but reducing tax giveaways to businesses and the rich). Secondly, a National Investment Bank is an extremely useful vehicle for channelling an increase in public sector investment. Thirdly, through the fiscal responsibility rules it has given itself a ‘knock-out’ clause on current spending too if growth were so slow that interest rates were close to zero. Finally, it has not ruled out Quantitative Easing (money creation) to supplement an investment-led approach to economic recovery.

The charge from the Tories is that all of this is a ‘magic money tree’ fantasy, a variant on the claim that there is ‘no money left’. But this is untrue, and marks an important difference with the 1970s. Chart 1 below shows the ‘Investment Gap’, the difference between the level of investment in the economy and the level of profits. Investment is measured by Gross Fixed Capital Formation and profits measured by the Gross Operating Surplus of firms. Both are in nominal terms. 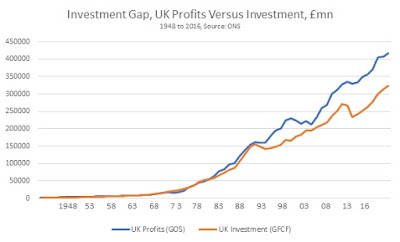 The chart shows that an enormous gap has opened between the level of profits and the level of investment (even the latter is flattered because it included the investment of government and of private households).

The proportion of profit directed towards investment has also fallen dramatically, especially since the early 1970s when it reached its zenith. In fact, for the entire period 1966 to 1976 the level of investment in the economy as a whole exceeded the level of profits. In 1976 itself investment was equivalent to 125% of UK profits. This was particularly boosted by a much higher level of public investment than now. But there is no reason why business investment alone cannot exceed the levels of profits, at least for a period, when borrowing can be used to supplement profits as a source of funding (in anticipation of high profits).

The argument that the company sector is too indebted to fund investment is factually incorrect. Company debt has been falling measured as a proportion of GDP, and especially measured against its own profits since 2010. Its interest bill has fallen to £8.5 billion in 2015 from £26.5 billion in 2007 (ONS Blue Book).

Yet if all the Corbyn leadership intended was to introduce further taxes on business or simply expropriate their profits, then the current investment go-slow would rapidly become an all-out investment strike. But that is not the policy. The economic policy also includes significant public sector investment, from which the private sector profits. It is simply that the non-investing, non-productive sectors of the economy will be worse off, while those businesses providing inputs to public sector investment and/or who benefit from it will be winners. If access to overseas markets is not disrupted, this is the basis of a successful reforming economic policy.