.453ZDavid Blanchflower On “The Long Slog” Ahead

David Blanchflower argues that the British economy faces a long period of slow growth as it attempts to claw back the output lost since the recession began. In an excellent short piece in the New Statesman he lambasts the government as ‘growth deniers’ whose policy will prolong the slump. The full article is here

Below we reproduce his chart showing the current recession compared to previous recessions. At the moment, only the Great Depression of the 1930s looks set to have been worse than the current downturn. 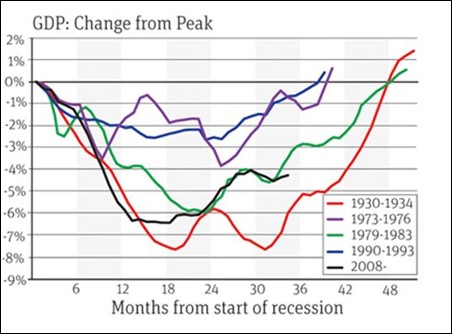