.765ZThe Hutton Report Is An Attack On All WorkersBy Michael Burke

Millions of workers will have to work longer, make higher pensions contributions and receive lower pensions in retirement, if the recommendations of the Hutton Report are adopted. That the Tory-led coalition is able to turn to a Blairite Labour former minister to build a consensus for this attack is itself a scandal. But the scandal deepens once the report is examined.

It calls for pensions to be related to career-average earnings (dubbed CARE in the Report), rather than final salaries, for increased pension employees’ contributions, for an increase in the retirement age and lower pension entitlements. In addition, it is recommended that a large swathe of private sector workers (both ‘outsourced’ and contract workers) be removed from the Local Government Pension Scheme altogether, despite the fact that these entitlements, like the others have formed part of work contracts.

But not a single of one of these proposals is costed or specified in detailed terms. Instead, the bulk of the 215-page report is devoted to a lengthy argument on the supposed superiority of CARE-based pension over final salary ones. There is no justification for stating this without specifying the level of pensions and the contributions to support them – which is not done.

Instead, the thrust of the Report is aimed at boosting the case for severely reduced pensions, without ever making the case for this. Instead, talk of ‘unprecedented’ rises in longevity since World War II is designed to create an air of crisis. In fact, to take a comparison, life expectancy at birth rose by approximately 30 years in Britain between 1800 and 1840, and has risen by approximately 8 years since WWII. The improvement in longevity, in short, is clearing slowing, if not reaching a plateau but throughout the entire previous historical period pension entitlements were being established or were increasing and not being cut and falling.

This adoption of a scare tactic is fatally undermined by the second chart reproduced in the Hutton Report itself. It shows that the proportion of GDP devoted to public sector pension schemes will fall dramatically in coming years on current policy settings, that is without any of Hutton’s ‘reforms’. The chart is shown below. 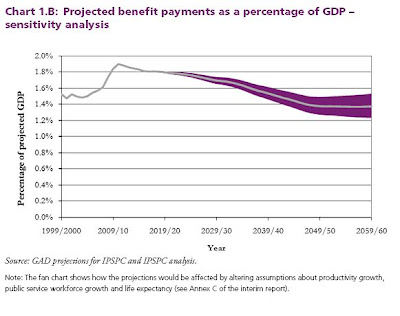 The chart is from a commissioned report from the Government Actuary’s Department. This shows that the proportion of GDP devoted to public sector pensions will peak at just 1.9% in the current Financial Year (FY) 2010/11 (ending in April this year) and that it will fall to just 1.4% in FY 2059/60. The fan chart shows a distribution of outcomes by likelihood based on assumption about the growth in productivity, the public sector workforce and longevity. But even in the highest-case scenario, the pensions payout is just over 1.5%, much lower than currently, and in the lowest-case it is a little over 1.2% of GDP.

There is therefore no substance to the claim of a public sector pensions crisis. Assertions that there is a crisis are a fallacy, which are designed to create an atmosphere where cuts to pensions are acceptable.

The Cost of Pensions

This is not an argument against the benefits received by pensioners in the private sector. But, noting the inherent inefficiency of private sector pensions, there is a clear case for bringing them into the public sector, to achieve a more efficient return.

The Hutton Report also shows the annual payout for public sector pensions. This is show in the chart below. 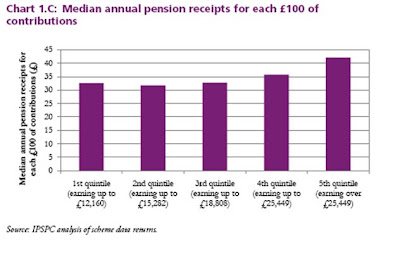 Hutton focuses on the unfairness of the pensions payout, which is undeniable. Higher earners receive a higher proportionate payout than the low-paid, although Hutton’s CARE option is not sure to redress that. But he neglects entirely a glaring point from the data, that a public sector worker has to be in retirement much longer than in public sector employment simply to get their own contributions back. For the higher paid this is 2.5 years longer in retirement and for the low paid this is 3 years in retirement for every year in work. As many public sector workers (teachers health workers, civil servants, social workers, etc.) can spend a working lifetime in public service, many will never even receive their contributions made. Even any moderate increase in contributions will ensure that this applies to the overwhelming majority of public sector workers- they are not a cost to the State, but are subsidising it.

Finally, the ‘cost’ of public sector pensions is a fraction of other items of spending, for example the military budget. This is currently 2.6% of GDP, but as leading economist have noted, this stated total is only a proportion of the hidden costs of British military spending. However, while British military spending produces only destruction and mayhem overseas, and fat bonanzas for corrupt arms’ manufacturers , spending on pensions produces economic well-being, increased demand and smoothed incomes over a lifetime, all of which contribute to the economy. These in turn provide sizeable returns to government as output, demand and profits are all boosted, which all in turn boost tax revenues and lower outlays in areas such as healthcare.

This economic and fiscal benefit of public sector pensions is entirely ignored by Hutton. But it should not be ignored by anyone who wants an economy to grow by placing the wellbeing of its citizens at its core.