Economic Crisis Is Cause of Deficits, Not Vice Versa

SEB has repeatedly argued that it is the economic crisis which has caused the rise in government budget deficits, not vice versa. This view is reinforced by the recent gyrations in global financial markets. .

This issue is crucial for the debate on economic policy, as understanding the real factual situation clearly leads to promoting growth as the means to tackle the deficits. By contrast, an analysis which suggests that it is the increase in government spending which has caused the economic slowdown can simply be addressed by cutting that spending.

The latter is the policy pursued by the Tory-led Coalition. It has strong ideological support across the media, including the BBC. It is not at all based on the facts. Before the Great Recession began in 2008 the public sector deficit in the UK economy was 2.7% of GDP. It rose to nearly 4 times that level in 2010 at 10.4% of GDP. The same is true across the Euro Area as a whole, where the deficit was a negligible 0.7% of GDP in 2007, and rose to 6% last year.1 The same pattern is evident in the US where the deficit rose from 2.8% to 10% of GDP, and in Japan from 2.4% to 9.7%. The public sector deficits in all cases rose under the impact of the recession and the varied efforts of governments to offset its effects. There is a very useful dissection of the sources of the US deficit here from Professor John Weeks . In the US as elsewhere, the deficit is driven by the fall in both income and corporate tax revenues, and a rise in unemployment benefit payments as the jobless total rose.

The recent turmoil in financial markets arises because of the accumulating evidence of a renewed slowdown in economic activity, including both in the US and Europe. But this has not prevented the widespread assertion that the turmoil was caused by the European debt crisis. This is to compound the initial error, which also views the world through the wrong end of the telescope and holds that deficits are causing the slowdown.

A characteristic example of this incorrect assertion comes from the BBC’s business editor Robert Peston. On August 7 Peston wrote: ‘Although bankers say the downgrading of America’s credit rating was unwelcome, their more pressing worry is the rising price Italy has to pay to borrow – the rising price of Italian government debt’. Italy is extremely important, as it is both the third largest economy in the Euro Area and has the largest level of outstanding government debt. But the yields on Italian government debt had peaked on August 4, and as the chart below shows fell continuously through the following week. 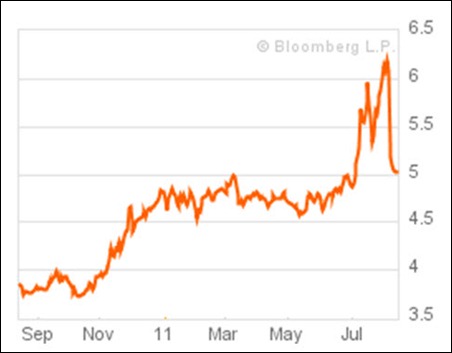 Bond prices rose for all EU governments and their yields fell as the ECB bought €22bn in EU government debt. This is a welcome departure from the ECB, and represents a further small step in the direction of EU-wide solution to the crisis rather than further attacks on ‘peripheral’ economies. It is also likely to be insufficient given the scale of the deficits and existing debts in the Euro Area. But it is clear from the chart that the continued turmoil in stock markets is not driven by EU bond markets – they had stabilised.

At the time of writing, most major stock markets are falling once more in reaction to the weak German GDP for the 2nd quarter, up just 0.1% in the quarter. By contrast government bond prices are rising and yields falling – in the case of Germany and the US to new record lows . And bond yields for the crisis-hit European countries are now back at levels last seen a month ago, before the EU summit on Greece.

The same cannot be said for stock markets. The chart below shows the performance of leading stock markets. All the major stock indices of the US, Germany, France and Britain are nursing losses in the range of 5-10% – the exception is the Shanghai Composite Index which has recovered all the recent lost ground.

There is a clear message from the divergent paths of major financial markets in recent days. Stocks have fallen and bonds have risen because growth is weakening once more. The markets have taken fright not from public sector deficits, which remain large – yet bond yields are falling. They have taken fright from slowing economic activity. Financial markets are not clamouring for spending cuts, VAT hikes and job losses. The remedy they seek is the one that is necessary for the economy- a return to growth.