Z&max-results=12″>here. The chart below shows the declining trend in Tory support in actual general elections rather than opinion polls. 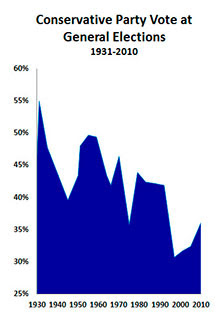 This key fact, so routinely ignored by innumerable political commentators now including David Miliband, was first identified in 1983. 30 years later it still holds true. If the Tories vote in 2015 were strictly on trend, and they suffer an electoral defeat, it will fall back to 30.3%.

The siren song of David Miliband, and others on the Labour right, that the Tories are most likely to win in 2015 is coupled to an argument that they only way to prevent this is for Labour to adopt Tory policies. This is entirely false. The consistent decline of the Conservative votes shows that Tory policies have been unattractive, not attractive, to voters. It has been Scottish and Welsh Nationalists, and the Liberal Democrats, that have gained votes. Labour’s recent swing towards Tory policies has therefore completely foreseeably led to no increase in support at all – but will demoralise a significant number of potential Labour supporters.

Miliband and the Labour right’s argument are pitted against not just the current opinion polls but against the whole post-war trend in Tory support.