Words matter. But in economic discussion as elsewhere they are frequently abused. In economic commentary one of the most frequent falsehoods is to describe speculative activity as investment. Stock market ‘investors’ are in fact engaged in speculative activity. There is no value created by this speculation. The claim made by its apologists that it provides for the efficient allocation of capital to productive enterprises is laughably untrue in light of both recent events and long-run history. In fact, a vast number of studies show that that there is an inverse correlation between the growth rate of an economy and the returns to shareholders in stock market-listed companies.

The chart below is just one example of these studies, Fig. 1. The research from the London Business School and Credit Suisse shows the long-run relationship between real stock market returns and per capital GDP growth. The better the stock market performance, the worse the growth in real GDP per capita. The two variables are inversely correlated. 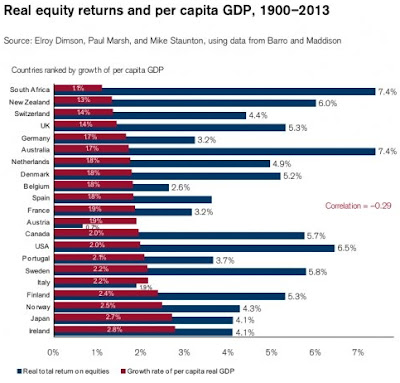 This is exactly what has been happening in all the Western economies over a prolonged period. SEB has previously identified a declining proportion of Western firms’ profits devoted to investment. The uninvested portion of this capital does not disappear. Instead, it is held as cash in banks and the banks themselves use this to fund speculation and share buybacks by companies (which simply omits the banks as intermediaries in the speculation). The effects of this are so marked that some analysts believe ‘financialisation’ is the cause of the current crisis, when instead it is an extreme symptom of the decline in investment and the consequent growth of speculative activity.

It is now customary in the Western financial press to routinely ascribe all aspects of the Great Stagnation to some failing in China. So, China’s fractional currency devaluation has been identified as the culprit of the recent stock market plunges, even though the 3% devaluation of the Chinese RMB followed a 55% of the Japanese yen and a 27% decline in the Euro.

The claim that the crashes were caused by China’s currency move has no factual basis. Fig.2 below shows the closing level of the main US stock market index in August. The S&P 500 rose from 2,083 to 2,102 in the 4 days after the RMB’s 3.2% devaluation which finished on August 13 (first arrow).

On August 19 the Federal Open Markets Committee (FOMC) of the US central bank released the minutes of its most recent meeting (second arrow), which was widely interpreted as indicating a strong likelihood that interest rates would be increased in September. The prior closing level for the S&P500 was 2,097 and it fell sharply thereafter. Following speeches by a number of governors of the US Federal reserve (who vote on the FOMC) questioned the need for an increase in rates, and the market has recovered in response. Yet other speeches pointing once more to a rate rise led to stock market falls once more, and so on. 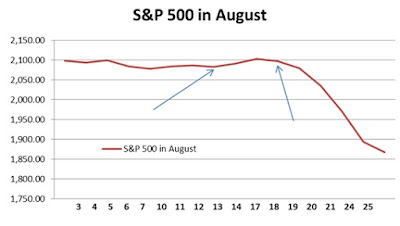 But this uncertainty over US rate increases is only the proximate cause of the crashes. This sharp fall is a stock market verdict that it cannot easily absorb higher US interest rates. The current valuations for the stock market are based on official short-term interest rates of 0.25% and a dividend yield on S&P500 stocks of 2.24%. Even if rates were only doubled to 0.5% the level of the stock market becomes much less attactive. If rates were to rise towards 2%, the risky stock market’s dividend yield looks extemely unattractive compared to risk-free short-term interest rates.
There is a spearate matter that the US economy does not look robust enough to absorb any significantly higher interest rates, but this hardly concerns stock market speculators. Fig. 3 below shows the pace of growth in US industrial production versus the same month a year ago. Production has slowed for a year and is down to a snail’s pace in the last 3 months, averaging less than 1.4% from the same period a year ago. The latest data show that the US economy is experiencing only modest growth, with GDP in the 2nd quarter just 2.6% higher than a year ago.
Fig.3 Growth In US Industrial Production 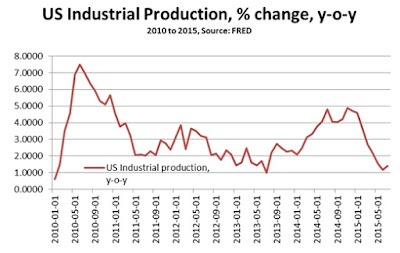 Since 2010 the major central banks of the US, Japan, and the Eurozone have created US$4.5 trillion, Yen 200 trillion and €1.1 trillion in their respective Quantitative Easing programmes. The Bank of England has added £375bn of its own. Over the same period short-term official interest rates have been at or close to zero. Long-term interest rates have also plummeted. This has not led to a revival of investment in the advanced industrialised economies. After the short-lived stimulus in some Western economies to end the 2008-2009 slump, total fixed investment (Gross Fixed Capital Formation) has slowed to a crawl in the OECD as a whole, as shown in Fig.4 below. 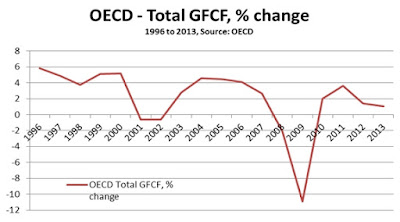 Yet over the same period the main stock market indices in the OECD economies have soared. The stock markets and real GDP are inversely correlated. The S&P500 index has effectively doubled since 2011. The Eurofirst 300 has risen by 55%, the Nikkei 225 in Japan has risen by 125% (boosted by currency devaluation) and the FTSE100 has risen by 25% (a poorer performance held back by the predominance of weak international oil and mining stocks). Data for 2014 is not yet available but the total cumulative increased on OECD GFCF from 2011 may not have reached 10%.

Corbynomics is the policy of attempting to address an investment crisis with an increase in investment. Its critics repeatedly claim that this policy will cause financial turmoil. In light of recent events this assertion ought to cause a wry smile. At the very least, the most powerful central banks in the world have to reassess their intentions on policy simply because of the wild gyrations in the stock markets. These have been accompanied by further large movements in global currency exchange rates.

The reason stock markets are so febrile, and policy so easily blown off course is that a bubble is being created in financial assets because of the combination of monetary creation, ultra-low interest rates and weak investment. Capital that could be directed towards increasing the productive capacity of the economy is instead being used to finance speculation; the worst of both worlds. This policy has caused inflation in financial assets such stock markets, in house prices and (previously) in commodities prices. But continued economic stagnation means that deflation is now the greater risk in the OECD economies at the level of consumer prices.

Corbynomics addresses those risks because its aim is to raise the level of investment in the economy. By increasing the productive capacity of the economy through investment-led growth it overcomes the weakness of the economy. By redirecting the flow of capital from speculation towards investment, it deflates the speculative bubble. So, to take an obvious example, by building new homes it provides housing and employment while deflating the house price bubble.

The root of the objection to Corbynomics is the insistence that the private sector, private capital must be allowed to dominate the economy in its own interests. But the current Western economic model is a combination of shopping and speculation, leading to stagnation. Corbynomics is the antidote to these; prosperity through investment-led growth.