Crisis hasn’t gone away. Corbynomics will be increasingly necessary By Michael Burke

One of the most widely repeated falsehoods about the British economy is the assertion that it is growing strongly and that the crisis is over. This is not borne out by even a perfunctory economic analysis but it serves a political purpose. In the first instance the assertion was important in order to blunt any criticism of renewed Tory austerity policies, which will begin again earnest with the Comprehensive Spending Review in December. Now that Jeremy Corbyn has won the leadership of the Labour Party the same falsehood is pressed into slightly different service- with the idea that his policies represent a threat to the current recovery, or are at least unnecessary.

Fig.1 Industrial production and manufacturing index from April 2013 to July 2015 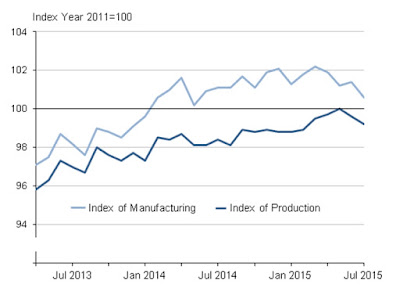 Source: ONS
This is not the boom that is repeatedly claimed. The recovery to date is primarily based on consumption not investment. Since the beginning of the recession to the 2nd quarter of 2015 consumption has risen by £70bn, a modest rise of 5%. But investment has risen by just £4bn, a cumulative rise of just 1.3% over 7 years, less than 0.2% annually.

In terms of output and investment, the notion of a boom amid austerity is entirely misplaced. There is only stagnation. In fact, the levels of industrial production and manufacturing are effectively unchanged since the Coalition took office in May 2010, despite inheriting a mild recovery. In May 2010 the index levels of industrial production and manufacturing were 100.2 and 97.6 respectively. In the most recent data they were 99.2 and 100.6. The trends in output are shown in Fig.2 below. They clearly show that under austerity production has stagnated. 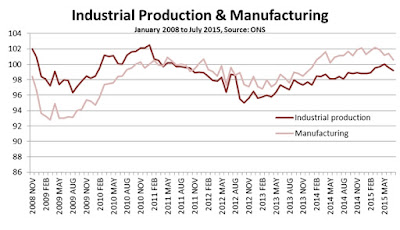 Far from a boom the current economic situation is best characterised as stagnation. In one form or another this also characterises the Western economies as a whole. Since the recession began in the OECD as a whole, the average annual level of GDP growth has been under 1%. Consumption has risen by US$2.5 trillion over that time. But Gross Fixed Capital Formation has declined by $200bn over the same period.

For the British economy, this continued reliance on consumption holds a particular threat. The relative weakness of investment and hence the relative weakness of productivity is a chronic one in Britain. The current crisis has deepened these severe long-term problems. Output has fallen back to levels last seen in the 1980s, as shown in Fig.3 below. This represents a combination of both the long-term weakness of manufacturing and the decline in the output of North sea oil, a financial windfall that has been almost entirely wasted.

Fig. 3 Industrial production over the long-term 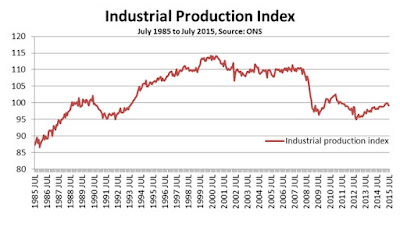 As it is not possible to consume that which is not already in existence, consumption must follow output. It cannot lead it. As the output of the British economy is experiencing both a structural and a cyclical decline, its increased consumption has been funded by its surplus on ‘financial services’, the money British banks extort from the rest of the world, and on increasing indebtedness.

As the revenue from financial services has now also gone into decline, so the resources for consuming without producing are increasingly through borrowing. The broadest measure of Britain’s overseas borrowing requirement is the balance on the current account. The current account includes both the trade balance and the balance on all current payments , primarily company dividends and interest payments by borrowers. Any deficit on the total current account must be met by increased borrowing from overseas (or asset sales to overseas). The latest 3 quarters have seen the worst current account deficits as a proportion of GDP since records began, as shown in Fig.4 below. 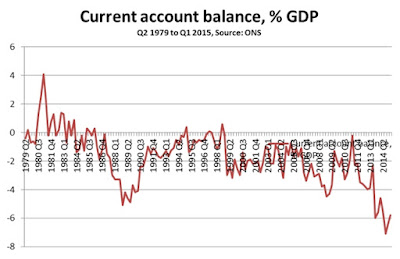 The financing of this deficit depends on the willingness of overseas investors to buy UK assets. It is impossible to predict the precise point or catalyst for them to stop doing so. But what is known is that the British economy has faced a number ‘balance of payments’ crises before when the relative level of overseas borrowing was far lower. One possible way of reducing the current account deficit is to impose higher savings rates on the household sector, raising the taxes and reducing the wlefare transfers to them from government, which is one effect of renewed austerity. But even austerity Mark II will be unable to close the current account gap of this magnitude entirely.

Therefore the British economy is facing a series of interrelated crises, of production, slow growth and unsustainable borrowing. In reality they are key products of a single crisis- the crisis of weak investment. Contrary to the Tory propagandists, the supporters of austerity and their apologists, the crisis of the British economy has not at all gone away. As a result Corbynonics, a state-led increase in investment, is vital to end it.