By Michael Burke
The US central bank the Federal Reserve has raised interest rates for the first time since 2006. The Fed began cutting interest rates in 2008 in response to the Great Recession and the associated financial crisis. On the face of it the timing appears odd, as the US economy has not experienced any robust recovery since the crisis. 2010 was the strongest annual growth rate at 2.5%, which is an extraordinarily tepid rebound from such a sharp recession.

More recently industrial production has gone back into recession, as shown in Fig. 1 below. Output has fallen for 4 straight months and is 1.2% below its level a year ago in November 2014. Although this is depressed by the fall in energy output, manufacturing as whole is barely stronger, rising just 1% from a year ago.

Fig.1 US Industrial Production In Recession 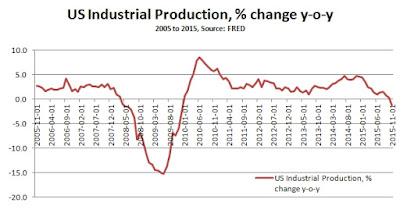 An economic slowdown and falling output might not seem the most appropriate time to raise the level of interest rates. But the level of Fed Funds is not correlated to the growth of industrial production at all, and has frequently moved in the opposition direction to the growth in output as shown in Fig.2 below.
﻿ 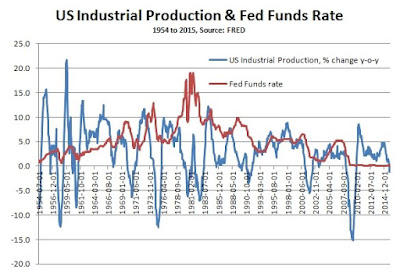 ﻿
The Fed has entirely different goals in raising rates in the current period, although it will have to monitor closely the pace of the slowdown. The goal of the Fed is to bolster the attractiveness of the US economy to capital inflows, and within that strengthen the already dominant role of the banks.

One of the features of the current crisis is a widespread mystification of the role of credit and money in the economy. Interest rates are the price of credit, what is charged by the lender to the borrower. A key difficultly for banks in particular arises when interest rates are at or close to zero. If the price of credit generally available is close to zero and is readily available banks will find it extremely difficult to make profits. They will substitute lending for increasingly speculative activity, gambling in the stock markets, in housing, in commodities and so on.

However, there is a central misconception in the Fed’s efforts to ‘normalise’ the interest rate environment and it is a risky strategy. The idea is that raising interest rates will prompt a shift away from speculation towards productive lending for investment. But in aggregate US companies have little need to borrow for investment. This is because their own investment remains lacklustre and so can be funded well within their own resources, that is profits. Fig. 3 below illustrates this point by showing the nominal level of US GDP, company profits (Gross Operating Surplus) and investment (Gross Fixed Capital Formation). 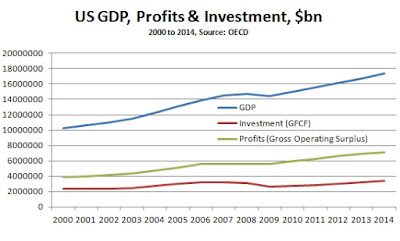 From 2000 US GDP has expanded by $7.1 trillion. Profits have risen by $3.3 trillion and yet investment has only risen by $1 trillion. In the period from 2000 to 2014 the profit share of US companies has risen from 37.5% of GDP to 41.2%. At the same time the proportion of GDP devoted to investment has fallen from 23% to 19.5%.
If we take the measure of the investment rate as the proportion of profits devoted to investment, this has fallen from over 60% to little more than 47% over the period. As a result, firms can access their own funds in order to finance productive investment. Yet, as already noted, investment is a declining proportion of US GDP.

Instead, the most likely outcome of higher interest rates is likely to be increased charges to consumers, in the form of credit card debt, auto loans, mortgages and so on. This will effectively be a transfer of incomes from consumers to banks.

On a global scale the effect is likely to be much worse. As the US Dollar is the sole world reserve currency all international debtors are obliged to borrow in US Dollars. For commodity producers, whose exports are priced in US Dollars the further fall in commodities’ prices reduces national incomes and tends to cause both currency depreciation and capital flight.

Capital tends to flow towards the US with higher rates. Outside the industrialised countries the so-called ‘emerging markets’ are expected to have seen their first net outflow of capital in 27 years in 2015. For individual countries such as Brazil, Turkey, South Africa and many more the effect of capital flight can be dire.

But there is also a negative impact on the world economy as a whole. Capital flows to the US are to a low investment-high consumption economy. Sucking in capital from the rest of the world to finance US consumption – and bank interest on financing it – will have the effect of slowing world growth even further. It is a high-risk strategy from the Fed, one in which the US is unlikely to be the main casualty.