During the last year some international financial media, with Bloomberg playing a particularly active role, attempted to present a picture of the world economy that the U.S. is growing strongly while the rest of the world, including China, is relatively weak. Publication of new U.S. GDP data confirms the truth is the exact opposite: The U.S. economy has slowed drastically with China growing far more rapidly than the U.S. Indeed, the U.S. in the last year has grown more slowly even than the EU.

The wise Chinese dictum says “seek truth from facts.” To establish the facts regarding the global economy, Figure 1 therefore shows the last year’s growth, up to the latest available data, in the three largest centers of the world economy – the U.S., China and the EU. The pattern is unequivocal. In the year to the 2nd quarter of 2016 China’s economy grew by 6.7 percent, the EU by 1.8 percent and the U.S. by 1.2 percent. The U.S. is therefore the most slowly growing major part of the world economy. Making a bilateral comparison, China’s economy grew more than five times as fast as the U.S.’ during the last year.

These three major economic centers together account for 61 percent of the world’s GDP at market exchange rates. No other economies have remotely the same impact on the global economy. Therefore, there is no doubt that in the last year it is the U.S. which has been the biggest drag on the world economy. 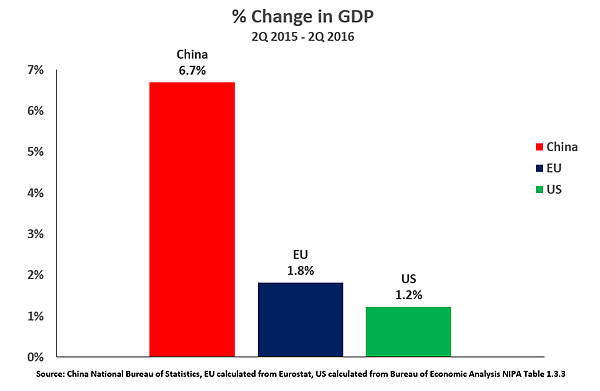 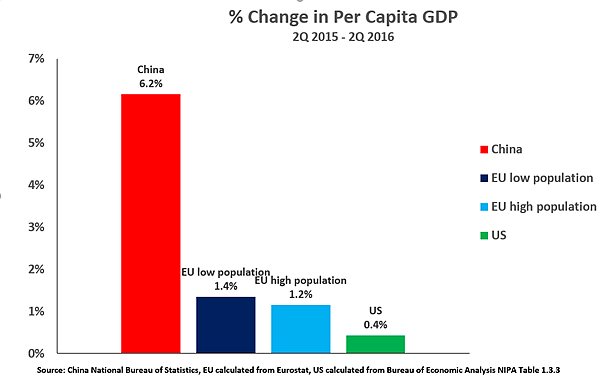 It may be argued against these factual trends that future revisions to the U.S. may raise its estimated growth rate. This is a factual question which requires watching future data releases – it is also possible future data will revise U.S. growth downwards. U.S. GDP growth is sufficiently close to the EU’s, with a 0.6 percent gap, that is not impossible that U.S. GDP growth will be seen to be faster than the EU – although of course U.S. GDP growth will remain far slower than China. However, it may easily be demonstrated that huge revisions of the U.S. data would be required to alter the pattern that it is the U.S. economic slowing which has been the main cause of the downward trend in world economic growth.

To demonstrate this, Figure 3 shows year on year growth in China, the EU and U.S. for successive quarters since the beginning of 2015. The changes over that period are clear. The EU has maintained relatively consistent GDP growth of 1.8 percent. China’s GDP has slowed slightly from 7.0 percent to 6.7 percent. U.S. GDP growth however fell sharply from 3.3 percent to 1.2 percent.

Compared to the beginning of 2015, EU GDP growth has not fallen at all, China’s declined by a mild 0.3 percent but the U.S. decelerated by 2.1 percent. By far the most severe slowdown in the world economy has therefore been in the U.S. Only huge, and therefore highly implausible, revisions in U.S. data would be required to alter this pattern. What therefore is the conclusion of the examination of the actual factual trends in the world economy?

· The chief cause of the slowing of the world economy in the last year is the slowdown in the U.S.

· The EU and above all China have outgrown the U.S. in terms of total GDP increase.

· U.S. per capita GDP growth, 0.4 percent on the latest data, is extremely slow.

· During the last year China and the EU have undergone either no or only mild economic slowdown while the U.S. has suffered a severe economic deceleration.

Gross inaccuracy in international financial media regarding China is not unusual – they have, of course, been regularly predicting the “collapse of China” and a “China hard landing” for several decades. But the picture presented that the pattern of growth of the global economy has been strong growth in the U.S. and weak growth in China is therefore entirely false – it was the U.S. which showed to the weakest growth. Titles from Bloomberg this year such as “Fed Leaves China Only Tough Choices,” “Why China’s Economy Will Be So Hard to Fix,” and “Soros Says China’s Hard Landing Will Deepen the Rout in Stocks,” coupled with claims of the strong performance of the U.S. economy, are shown by the data to be simply inaccurate.

But international and Chinese companies, as well as the Chinese authorities, require strictly objective information – not claims which are the opposite of the facts. Perhaps the wise Chinese dictum should be modified to read “seek truth from facts – not from Bloomberg.”

The above article is reprinted from China.org.cn