In his recent speech to Labour Party conference Jeremy Corbyn said, “It isn’t migrants that drive down wages, it’s exploitative employers and the politicians who deregulate the labour market and rip up trade union rights.” This is excellent and entirely correct. It is probably the best statement ever made by a Labour leader on this issue.
It used to be regularly argued, and not just by far right or fascist groups, that immigrant workers take British workers’ jobs. This has more recently been supplanted with the notion that migrant labour has driven down wages. Both are equally wrong.

The claims that immigrants take jobs became harder to sustain as the level of the overseas migrant population reached record highs in Britain at the same time as a record high level of employment overall and a record high for employment of UK-born workers. Even so, the most recent Tory party conference tried to revive the racist claims, with lists of foreign workers, removing overseas doctors from the NHS and prioritising immigration controls over economic prosperity. Some of these have already fallen apart while they would all be deeply damaging to the UK economy, as well as fanning the flames of racism. 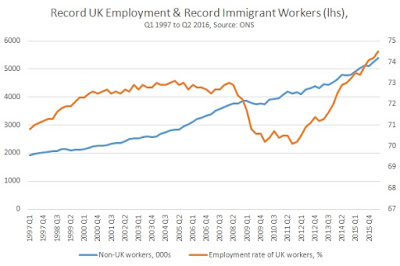 Instead, the anti-immigrant rhetoric has more recently focused on the claimed negative impact on wages arising from immigration. As this false idea has some sway even in the labour movement it is worth dealing with the false economic logic which forms its basis.

The false claim that immigration drives down wages has long been exposed as relying on the ‘lump of labour fallacy’ . The long history of capitalism in general is that more and more workers across the globe are brought into production. That is still happening to this day. At the same time, for the overwhelming majority of those workers their material conditions have risen enormously over the same period. The growth of the workforce has been matched by the growth in the work available. This is because of the growth of the productive capacity of the global economy, in which workers fight for a share.

Instead the attack has switched to the alleged impact of immigration on wages. As the discussion of this issue is so loaded with emotion and confusion in a country like Britain, it is important to set out some clear points of reference.

Objectively, there is no difference between a worker who travels ten miles, hundreds of miles or thousands of miles for work. There is of course no difference in terms of their skin colour, religion, gender, sexuality or nationality. Wages in any city or town are not more or less affected by the immigration of a worker from the next county than from a different continent.

Yet the idea that wages are driven down by immigration, that the price of labour (wages) is determined by the increased supply of labour from migration is closely related to the lump of labour fallacy. They both depend on the notion there is a fixed amount of work or fixed amount of wages, and that in both cases these are adversely affected by increasing the supply of labour through immigration. For the lump of labour, now read the ‘pool of wages’. These are false notions.

Wages have an absolute floor and an absolute cap. The absolute floor is set somewhere below the minimum levels of subsistence for the continued existence of the workers. In some cases, where slavery existed within capitalist production such as in the Southern United States or the European colonial powers’ operations in Africa and elsewhere, the workforce had to be constantly replaced as lives were destroyed in the production process.

The absolute cap on wages is set by the absolute level of value created by all firms (which each individual firm shares in). Firms cannot sustainably increase the level of wages beyond the total value created, otherwise all firms would go bust. In addition, the value created will tend to rise as capital is accumulated over time (even though, as now there may be distinct periods of crisis when there is little or no accumulation). As capital accumulates and the productive capacity of the economy rises, the absolute cap on wages will also rise.

Yet most wages are set well within those bounds and by different factors. It is widely understood that there are two principal destinations for the value created in an economy. In Marxist terms, these are the value created by labour a portion of which is claimed by the capitalists, ‘surplus value’. In mainstream economics there is instead a focus on the labour share of national income and capital’s share of national income. Income is not the same as value so these are an only approximate guide to total value created and the portion claimed as surplus value. 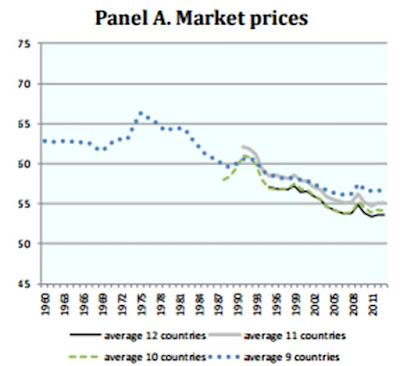 As the chart shows there has been a dramatic decline in the labour share of national income. This is sometimes and mistakenly attributed to the forces of globalisation, that somehow workers in poorer countries have ‘taken the jobs’ or driven down wages in the advanced industrialised countries. This is simply a geographic variant on the ‘lump of labour’ or ‘pool of wages’ notions.

Chart 3 below the level of labour productivity in the G20 economies and the real wage index from 1995 to 2013, which includes the period which is regarded as one of accelerating globalisation. If labour in the advanced countries was being undercut by labour in poorer countries it would be extremely difficult for there to have been a rise in labour productivity in those countries. Production, especially high-value production would have been shifted overseas.

Instead, the chart shows that the rate of exploitation in the G20 increased over the period. A greater proportion of the value created by labour was claimed by capital as surplus value; the capital chare of national income rose. 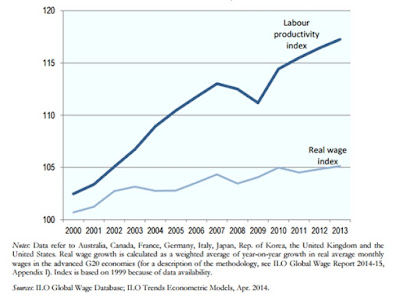 Within the absolute caps and floors set for wages by the value created by labour within all firms and the subsistence of the workers, the general and continuous contest between labour and capital over the share of that surplus is set by the class struggle. Over a prolonged period this is a struggle the capitalist class has been winning in the advanced industrialised countries.

In the OECD economies the proportion of workers in part-time employment has risen from 5.4% in 1960 to over 20% in 2015. Union densities were 35.6% in 1975 and had fallen to less than half that, just 16.7% by 2014. It is not workers outside the advanced industrialised countries who have lowered wages in the G20 countries. It is the capitalist class in the G20 which has robbed workers of a greater proportion of the value they create.

Of course, it is in the interests of those same capitalists to foster the idea that someone else is to blame. This partly accounts for the tenacity of these very false ideas. It also explains why far right and fascist groupings are tolerated or even promoted by big business, sometimes even funded by them.

But it is impermissible for the labour movement to adopt these ideas or even to adapt to them. This is not primarily a question of political morality, although that should enter calculations. The reason the labour movement as a whole should thoroughly reject any notion that jobs or wages are lost to migrant workers is primarily self-interest.
There is no example anywhere in history of a ruling class that offered to make one section of workers better off at the expense of others and that made good its promise to the former. Yes, it is possible to systematise discrimination against one of more sections of workers and make their lives an absolute misery, or even worse. But the distractions of racism, xenophobia, frenzied attacks on religious or national groups and so on are precisely that; designed to distract from the absence of any strategy to lead society out of its morass. The workers not directly under attack are only ever relatively better off. Their absolute conditions never improve as a result, and often worsen. The poor whites of Southern United States were immeasurably better off than the black slaves. But their living conditions did not improve, and ultimately the whole parasitic, bloodthirsty society had to be crushed by the industrial North.

If the labour movement pays the slightest lip service to these lies it does itself great injury. It disarms itself in the class struggle by agreeing that it is foreign workers, not rapacious bosses who have driven down wages, increased rents and increased prices.

In fact the true position is that migrants add to net prosperity for the whole of society. Even if that view is not widely accepted in Britain, we may soon be provided with incontrovertible proof that it is correct. Unfortunately, this may well be a negative proof, as the Tory Government clearly aims to reduce immigration even at the expense of falling living standards. A position that used to be confined to UKIP’s cranks is now government policy. All our living standards will fall further as a result, if this policy is implemented. The labour movement has every reason to oppose its implementation.