Following the Brexit vote here and the victory of Trump in the US Presidential election there has been much ill-informed discussion of the ‘left behind’, sometimes spuriously described as the white working class who have not benefitted from rising living standards, or even globalisation in general.

It is not the purpose of this article to untangle the web of half-truths, distortions and falsehoods that comprise those statements. To take one example, the first great political and social exposition of the effects of ‘globalisation’ can be found in the Communist Manifesto. This sets out the enormous capacity of capitalism to dominate the globe by raising production up to a new, much higher level and so increase the exploitation of both natural resources and labour. It has nothing in common with radical ‘anti-globalisation’, that is protectionist and increasingly anti-immigrant movements in the Western countries.

Instead the focus here is narrowly on who are the ‘left behind’ in the UK. They are not the old white workers of the former industrial north, as is commonly portrayed. They are youth, dsiproportionately Asian and black youth. These are the very people who oppose Trump and who largely voted to Remain (71% of them).

There is a gender element too to who is in fact left behind. Table 2 below is taken from the same briefing. In aggregate the unemployment rate for women is lower than for men. But this is somewhat misleading, as the sample size is lower, 610,000 for women versus 750,000 for men. This reflects the fact that women are more likely to be discouraged from the workforce, or are obliged to be carers within the family. So the lower unemployment rate for women shown here needs to be seen in that context.

On this basis, the unemployment rate for women is lower than for men. However, contrary to the general trend the position for Asian women is worse. For them, unemployment is even higher than it is for Asian men. Yet again, the highest rates for unemployment among both women and men is to be found among black women and men.

On pay, it is also the case that workers who are not white are paid less than their white counterparts and colleagues, and that this pay discrimination increases with qualifications. Table 3 is taken from a TUC report into black workers’ pay gap. There is a considerable pay gap for workers from all non-white ethnic groups, on average 75 pence an hour. But this rises to a pay gap £1.72 an hour for black workers on average. This pay gap also increases up the qualifications’ scale, so that black workers with a degree earn nearly a quarter less than their white counterparts, £4.30 less an hour. 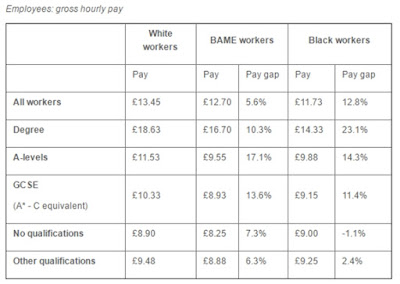 It is a fiction to suggest that the votes for Brexit and for Trump are the ‘left behind’ votes, the victims of deindustrialisation or even its opposite, globalisation. In Britain, the real left behind, much more likely to be unemployed and low paid are youth and especially black and Asian youth. Black people and Asian people in general are also more likely to be unemployed and, if in work, face pay discrimination. Women are also more likely to be discouraged from the workforce, yet Asian women are the sole category of women whose unemployment rate is higher than their male counterparts, even after taking this obstacle into account.

These are the primary victims of the third great capitalist slump and they are the ones bearing the main brunt of its effects. Of course, the overwhelming majority of workers and the poor are all worse off because of the crisis. But the by far the biggest victims are youth, especially Asian and black youth, as well as women. They are the real left behind.