2017 has begun with some upbeat economic survey evidence although the majority of economic forecasters are cautious about whether this will be sustained. Leading stock market are also at or close to all-time highs. The reality is that the UK economic outlook is deteriorating. This will have both important economic and political effects over the course of the year.

Chart 1 below shows the nominal growth rate of profits for UK companies, quarter-on-quarter. Profits (more accurately the gross operating surplus) of firms have fallen marginally before inflation is taken into account. Once the effect of price rises is included, the fall in profits becomes more substantial. 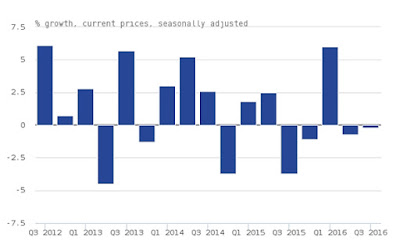 Source: ONS
Quarterly growth rates can be misleading, in part because they also reflect the impact of immediately preceding growth rates. If these were substantial, as in Q1 2016, then the effect is to depress subsequent quarterly growth. In a less erratic measure, the moving average of the last 5 quarters year-on-year growth rate in profits is 0.8%. This is extremely weak, and turns negative in real terms, once inflation is taken into account. It is much weaker than the long-run average growth in profits for the UK economy, which has effectively been slowing down since the early 1970s, with cyclical fluctuations.
Chart 2. UK companies’ year-on-year growth rate of profits, 1956 to 2016 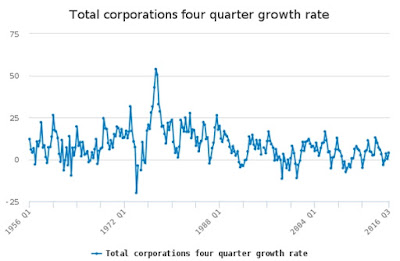 Source: ONS
Profits matter. The creation of surplus value and accumulation as profit is the motor force of any capitalist economy. While every individual firm will continue to seek to maximise profits, if the total accumulation of profits is close to zero, then firms as a whole will primarily seek to maintain their capital rather than to expand it. Capital preservation is the priority.

This is exactly what has happened in the recent period. Firms have stopped investing, and are generally content to hire workers only as an alternative to capital investment or where they can enforce limited hours, low pay, zero hours or other increases in exploitation. In each of the first 3 quarters of 2016 the total level of business investment was below the equivalent period in 2015. In the quarter to October there was no growth in employment, while full-time employment fell by 50,000, made up by a similar rise in part-time work.

These trends represent the acceleration of longer-term tendencies in the UK economy. Chart 3 below shows the contribution of the different sectors of the UK economy to the total accumulation of the capital stock. From 1997 to 2015 UK companies increased their net capital stock by less than 1.5% per annum. 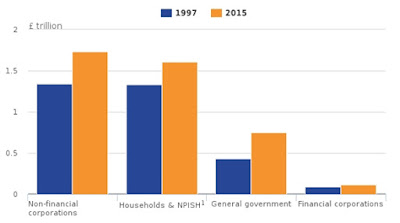 Source: ONS
In absolute terms the company sector increased its capital stock by £390 billion over the period. But the combined increase in the capital stock from the household and government sectors significantly exceeds this total, rising by a combined £600 billion! The UK has not been able to rely on the private business sector to lead productive investment for a long time.

But this long-term trend has become more pronounced since the crisis. Private companies’ net capital stock has risen by little more than 1% on average per year since 2007. This profit-induced weakness of business investment is the primary cause of the Great Stagnation in the UK and in other advanced industrialised economies since the crisis.

Since the Brexit vote profits have declined outright and so has business investment. Manufacturing has declined by 1% since June and industrial production has fallen by 2%. The trade gap has widened by £8 billion compared to the same period in 2015, an increase of almost 20%. The forecasts of sunny uplands by the Brexiteers are purely delusional.

There are many single markets in the world. The British economy is itself one, with minor exceptions there are common laws, freedom of movement for goods, capital firms and people, and a unitary currency and fiscal policy. The benefit of the EU Single Market in the making is that it is one of the world’s three largest single markets, alongside China and the US. This provides a powerful magnet for capital seeking profits.

British firms are struggling to realise profits. Ever since the crisis their level of investment has been abysmally low. This deepened the long-run negative trends in the UK economy. These have become sharply worse since the June 23 referendum. In any Brexit scenario, the less the access to the EU Single Market, the lower the attractiveness of the UK to international capital. Without a dramatic change in Brexit policy, there is little reason for optimism about UK economic prospects in 2017.