The UK economy has slowed since the Brexit vote. This is long before Brexit actually takes place, which will cause a further sharp deceleration in the economy and significantly lower living standards.

The latest GDP data have been widely hailed as confounding the authors of Project Fear, including the former Chancellor George Osborne. His talk of an immediate recession on a Leave vote was clearly a foolish exaggeration. By contrast, the Bank of England’s sober assessment focused on the long-term and argued that growth and living standards would be significantly lower as a result of Brexit. The BoE’s assessment may be an under-estimate as it probably takes insufficient account of the depressing effect on investment.

The GDP data show a slowdown. In 2014 GDP grew by 3.1%, which slowed to 2.2% in 2015 and slowed again to 2% in 2016. In the final quarter of 2016 the preliminary estimate is that agriculture, construction and production combined contributed just 0.2% to growth. Instead, the economy is running on services, especially retail sales growth.

As prices are rising, there is a widespread assessment that consumers are spending at a rate far higher than income growth in a pre-emptive move against rising inflation in 2017. If so, consumers are probably right. Chart 1 shows the effect of changes in the value of the pound (using the Bank of England’s Sterling Trade-Weighted Index) on consumer prices. In this chart the consumer price inflation rate is lagged by 18 months, as changes in the value of the currently take their time to work through the economy. The Bank of England’s projection is that Inflation will rise to 2.8%. This would probably mean stagnant or even falling real wages once more. However, the last time the pound fell as sharply as after the Brexit vote, inflation rose to 5%. This would certainly mean sharply falling real wages.

Chart 1. Consumer prices and the pound 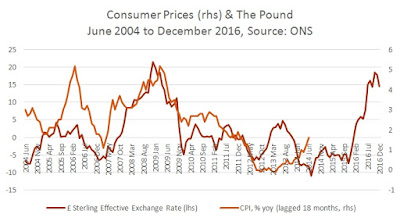 The rise in prices without a corresponding increase in wages means that the rise in retail sales and more generally in household consumption cannot last. But this is the main prop for the economy currently (Chart 2).
Chart 2. Largest and smallest quarter-on-quarter contributions of industries to headline GDP growth 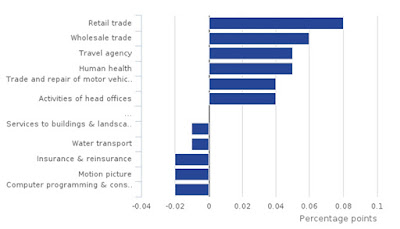 Source: ONS
There is a widespread misconception that ‘demand’ can lead the economy, by which it is meant that rising Consumption will by itself lift Investment and so lead to rising GDP. The services sector ‘Distribution, hotels and restaurants’ grew by 5.4% in the 4th quarter of 2016 compared to the same period in 2015, while real wages are growing at little more than 1%. If the theory, widely supported by ‘keynesians’ although having little in common with Keynes, that Consumption could lead growth was correct, then this would be a positive development and we should expect growth to accelerate. The opposite is the case. Household savings are falling and growth will slow further. Notions of ‘consumption-led growth’ cannot explain the real world, where Consumption has been growing strongly and GDP growth has been slowing (chart 3).
Chart 3. Household Consumption and GDP Growth, Q4 2009 to Q4 2016 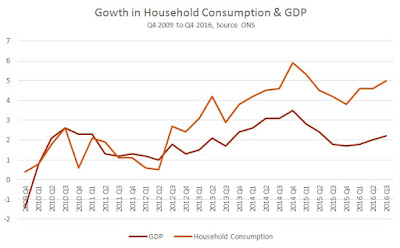 The previous Tory government introduced a series of measures to boost Consumption, ‘Help to Buy’ schemes and so on as part of its re-election campaign. The sharp slowdown in inflation also allowed real wages to rise very modestly from 2012 onwards. At this point, Consumption began to rise strongly, from around 0.5% annual growth to over 5%. However, GDP has not followed. Over the same period GDP growth has barely changed, rising from 1.5% to just over 2.2%.

Consumption-based services are among some of the lowest productivity sectors of the economy. The much weaker growth of manufacturing and industrial production at the same time means that employment patterns are changing in a negative way. In the 3 months following the referendum manufacturing and construction jobs combined have contracted by 60,000, having expanded by 136,000 in the 12 months prior to the referendum. Crucially, total hours worked for the whole economy have recorded the first fall since the stagnation of 2011. 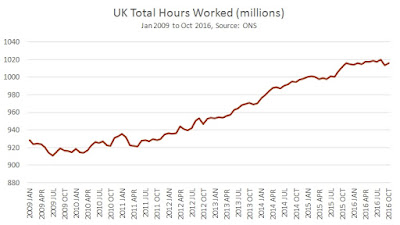 In the 12 months prior to the referendum total hours worked grew by 2%. In the 4 months’ data since then total hours have fallen by 0.2%. This should not be exaggerated. But it is widely understood that the crisis of the British economy is primarily expressed as a weakness of investment. This means that it is only possible for GDP to rise if there are more people in the workforce or if they are working longer hours, which is the recent experience. If hours worked stagnate or fall for a significant period, in an environment of weak investment then both GDP and living standards would fall.
Conclusion

It was a foolish exaggeration from the Tory leadership of the Remain campaign to suggest that the UK economy would immediately go into recession with a Leave vote. The negative effects of the Brexit vote provoked a sharp fall in the pound and interest rates were cut. These averted sharp slowdown, but the inflation effect will cut living standards.

The real effects of Brexit will be felt over the medium-term and will naturally be strongest only if and when Britain leaves the Single Market. Even so, it is clear that the economy is already faltering. 2016 GDP growth was weaker than in 2015 and in 2014. The economy is almost wholly reliant on services led by retail sales, which cannot be sustained.

Consumption cannot lead growth. The deepening imbalance in the economy is leading to job losses in manufacturing and construction, where there had been growth prior to the referendum. Worryingly, total hours worked have contracted in the near-term. If this persists in the continued absence of investment growth, a contraction in GDP and living standards would be almost unavoidable.

The Brexit vote is already leading to economic slowdown. Brexit itself will lead to job losses and lower living standards on a large scale.