.181ZFall in wages has much further to run By Tom O’Leary

The latest consumer price inflation (CPI) data showed a sharp acceleration in prices increases. This will have a negative effect on real wages and real incomes, once inflation is taken into account. Most workers are facing flat wages and the poor, who rely on social welfare and are seeing freezes or cuts, will all be poorer as a result. Even worse, economic trends suggest that this problem will deepen.

Chart 1 below shows the medium-term trend in real wages. It uses single month data rather than the more customary rolling 3-month average data highlighted by the Office for National Statistics (ONS) to smooth out monthly fluctuations. However, the single month data can be superior in identifying key turning-points. As the chart shows, it seems likely we have entered a key turning-point, with a sharp downturn. 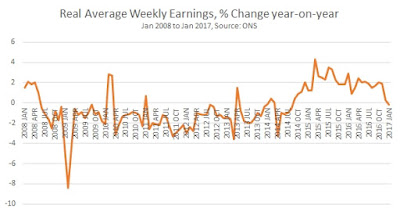 This is even more apparent in a ‘close-up’ of the same data focusing in the more recent period since the beginning of 2016 in Chart 2. This shows that real average weekly earnings fell by 0.2% in January compared to a year ago.

In the immediate period ahead the fall in real average weekly earnings is set to become more pronounced. In February, the acceleration in inflation saw the CPI jump from 1.8% from a year ago to 2.3%. There was zero inflation as recently as 18 months ago. It is extremely unlikely that wages will have kept pace with the recent jump in prices. So real wages are set to fall more sharply in the next few months.

Over the medium-term, these negative trends are likely to worsen. The complacency about inflation following the slump in the exchange rate value of the pound is misplaced. Devaluation effects take their time to work their way through the economy.

The pound slumped by 31% in the period from end 2008 to early 2009. But CPI inflation only peaked at 5.2% around 2½ years later in later 2011. This time around the devaluation is a little more than half the previous fall, which should limit the scope of price rises. But there is no reason to believe the period of rising prices will not be similarly prolonged.

This means that the fall in real incomes will also be similarly prolonged. The real wage slump will be deep and long.