The certainty that Brexit will push living standards lower is not really a forecast- it is already happening. Fundamental economic forces mean that Brexit can only have a negative outcome.

Immediately following the referendum the pound fell sharply and has more or less stayed at that lower level since. The 13% decline means that CPI inflation is moving remorselessly higher and will continue to do so. Higher inflation means lower wages and incomes in real terms.

People are already worse off, and Brexit has not even begun. On the current timetable negotiations are supposed to be concluded in early 2019. Only at that point will the massive disruption caused by Brexit really begin to take effect.

We will see then whether all the car makers stay, or if the Government has to bribe them with our money to stay. In either event we will be worse off. There should be no silly crowing about the probably departure of the banks either. Most workers in finance are not paid much more than average wages (and 165,000 of them are in unions). In all industries where there is deep connection to the EU there are likely to be job losses or contraction, whether these are complex supply chains, key export markets or simply the dependence on the free movement of labour (such as the NHS, hotels, agriculture).

The Government has prioritised reducing immigration over increasing prosperity. This too will make us worse off. Migrants are disproportionately workers. Two thirds of EU migrant population are in work, while less than half the UK population is, as they are in school, college or have retired. Reducing them will lower output and output per capita. We will pay the price in terms of lower tax revenues and even worse public services.

There is no socialist or even ‘people’s Brexit’. Everyone operating in the UK will still be subject to the laws of the market. The problem will be that the market will suddenly be much smaller and less productive than the EU Single Market the UK has been participating in for the last 25 years. If the Tories continue to get their way, there will also be a stripping away of the workers’ environmental and consumer rights that were instituted under the EU’s ‘Social Chapter’. These have long been a Tory target for abolition in the UK. Post-Brexit, the economy will be operating behind a series of tariff and non-tariff barriers as others protect their markets. All of these will make the economy less competitive and will increase costs.

Of course, the pound could depreciate sharply again to offset these disadvantages, but this would lower living standards and real incomes even further. If currency devaluations alone were the answer then Britain would be an earthly paradise. In 1940 there were 5 US Dollars to the pound. Now there are 1.25. Over the same period the relative size of the UK in the world economy has shrunk dramatically in real terms, to less than one-third its proportion of world GDP, 2.3% now versus 7.3% in 1940. 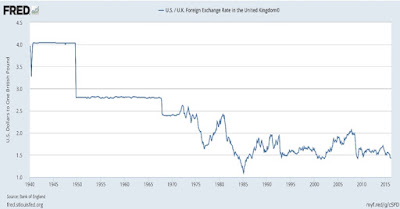 There is a widespread notion on the right that Brexit will lead to ‘taking back control’ of the economy. Unfortunately, this is also shared by important sections of the left. It is a delusion. The 1930s saw a whole series of countries taking back control, in what might be called an early anti-globalisation movement. Although the authors of these policies are now widely and rightly derided their arguments will actually be very familiar.

It was said that other countries were taking our jobs, they are dumping their output on us causing our industries to fail and that those industries need protecting and government support, or state aid. Once we have done that, then we would be able to trade freely with the whole world. Of course, the more virulent version also included vile invective against foreigners, immigrants, Jews, gay men and others. When the economic policies went spectacularly wrong, the racist invective became policy.

The reason these policies failed spectacularly should be clear. Behind the protective barriers, costs rise, potential markets are closed off (especially as they respond with barriers of their own), industry becomes less not more productive, profits decline and workers are laid off. The economic crisis that ensued was finally resolved only by general rearmament.

If a country cuts itself off from world markets, or simply erects barriers between itself and the world then it diminishes its own participation in the international division of labour, the international socialisation of production. Now, instead of being part of an intricate supply chain making cars, there are tariffs and other barriers which increase the cost of production. The UK becomes a less efficient place to make cars and production shifts at some point to the larger market where there are fewer or no barriers. Or pharmaceutical companies importing inputs (biochemical products, electron microscopes, processing equipment, and so on) find they now come with the additional costs of tariffs.

As a result of all this, investment is likely to be diverted to the bigger market, the market not burdened with tariffs. This is where the investment returns will be greater. Investment is the second most powerful determinant of growth, after the socialisation of production.

The UK will experience lower investment and even that investment will become less efficient, as access to the most technologically developed investment goods becomes more expensive. The UK economy will become a low investment centre of low-cost, low-value added production and wages and living standards will reflect that. So too will public services.

If I cut my daily calorie intake in half, I cannot say what my weight will be in three months’ time, but it will be lower. Forecasting a disastrous Brexit is not project fear. It is a certainty. It is fundamental economics.

A slightly amended version of this piece first appeared in the latest issue of Labour Briefing (Co-operative).