Recent discussion on the Tories’ Brexit mess has centred on the UK’s inability to emulate Singapore, because the government no longer has a parliamentary majority for the big tax cuts that would be necessary. This assertion was made in The Times and repeated in the New Statesman is wrong on both counts. The Financial Times also incorrectly argued that the Singapore model was one of low taxation.

There would be a majority among the Tory and DUP MPs, probably allied with the LibDems for tax cuts. This is what has happened in the two previous parliaments as part of austerity. What is stopping them from going down this route now is not parliamentary arithmetic but the opposition of the EU, who would refuse any beneficial trade deal if the UK adopted beggar-my-neighbour tax policies. And this is too embarrassing to admit.

But the debate also betrays a complete lack of understanding about the post-World War II economic performance of Singapore, which is not based on low taxes at all. As the huge rise in Singapore’s level of prosperity is simply a unique combination of general factors determining economic growth, that misunderstanding should be challenged and overcome.

Economic policies
The UK has already ‘done a Singapore’ as its main rate of Corporation Tax is currently 19%, with an intention to cut it to 17%. Singapore’s CT rate is 17%, but this has only been in place since 2010, long after the Singapore miracle began. Until 2000, the main CT rate in Singapore was 26%, and the growth rate has been slower since.

The measure of Singapore’s tremendous performance can been gauged by taking just one indicator, per capital GDP. Using Angus Maddison’s data, in 1950 Singapore’s per capita GDP was just $2,219 and the UK’s was more than treble that at $6,939. By 2008 Singapore had far outstripped that of the UK at $28,107 to $23,742. There is a strong material incentive to learn from Singapore’s success story.

Singapore is a capitalist economy, but it is not a bastion of laissez-faire economics, as is often wrongly asserted. The state owns all the land. This is not mainly deployed for rent, but allows the state to direct investment through the allocation of land for commercial and other purposes. The effect is to be able to direct strategically the level and focus for investment.
In addition, the state itself has a very high level of investment. A number of Government-Linked Companies are among the largest in the economy and include SingTel, Singapore Airlines and others. Effectively these are the sectors privatised in the UK, which Singapore has kept in state hands. Overall, the direction of investment through land ownership, and the ownership of major companies and a tax system which favours investment over speculation has produced a much higher rate of investment (Gross Fixed Capital Formation) in Singapore than in the UK over 50 years, as shown in Chart 1. 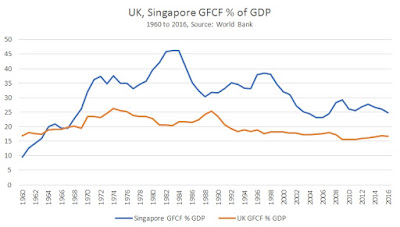 From the early 1960s onwards, that is after independence in 1965 Singapore has had a very high rate of investment, much higher than in the UK. But there is a far greater gap between the UK and Singapore in terms of merchandise trade as a proportion of GDP. This is shown in Chart 2 below. Singapore is one of the most ‘open’ trading economies in the world, with total trade a large multiple of GDP. It is also a significantly more open economy than the UK. 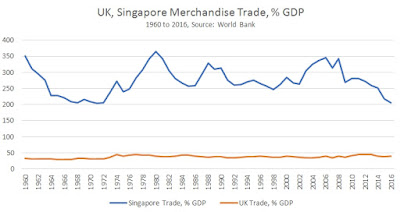 To be clear, this is not an ‘export-led’ growth where exports grow and import growth is suppressed. Throughout the earlier period, from 1960 to the mid-1980s Singapore’s imports were larger than its exports, as shown in Chart 3 below. Exports have only pulled ahead of imports in the later period, as overall growth has slowed.
Chart 3. Singapore Exports and Imports, % of GDP 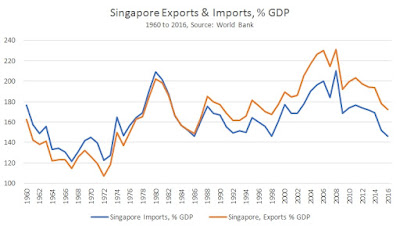 The specific weight of the contributing factors to Singapore’s growth have been analysed, most recently in Vu Minh Khuong’s excellent ‘Dynamics of Asian Growth’. This should be closely studied by all those interested in economic development, but its fundamental analysis could be applied equally well to a country looking to revive growth and re-industrialise, such as Britain, as to developing countries. In summary, Vu found that 59 percent of Singapore’s economic growth came from capital investment, 34 percent from growth of labour inputs, and only 8 percent from productivity (Total Factor Productivity) increases.

But the scale of the growth of all these inputs and of real GDP and per capita GDP was only possible because of the size of the market in which Singapore increasingly operated, the regional Asian market and the global market. As Adam Smith remarked, it is the size of the market which sets the limit on the scope of the division of labour.

None of this is what is planned by any of the Tories. The bluster that leaving the EU will allow the UK to trade more with other countries is just that. In fact, the UK is currently the EU’s second most important exporter of goods outside the EU, after Germany. But its non-EU exports are little more than a third of Germany’s. At the same time, UK imports from outside the EU are almost on a par with Germany’s, as shown in Chart 4 below. The UK’s chronic difficulties on trade have nothing to do with limited global access arising from EU membership; German non-EU exports are thriving. It has everything to do with a lack of British competitiveness caused by chronic lack of investment. 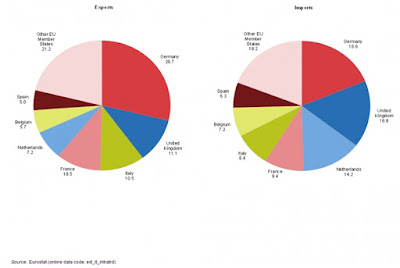 To follow Singapore, which would mean to achieve (re-)industrialisation in the case of the UK, would require large-scale state intervention in the economy in order to direct investment to a qualitatively higher level combined with an increased openness to international trade. The Tories are in favour of lower state intervention and privatisation, they are cutting state investment and with Brexit they will be cutting this economy from its largest market without any means even of replacing the trade lost.

No, the UK will not be turning into Singapore any time soon.