The British workforce is undergoing tumultuous changes. It is important for both economic policy and political strategy to grasp the nature of those changes. In addition, a factual analysis of the character of the workforce is a useful corrective to ill-conceived political analysis based on misplaced notions about what it is to be a worker.
This piece will focus mainly on one important aspect of the character of the workforce – its composition by skill category, according to designation by the Office for National Statistics (ONS). All data cited is available here.

In April-June 2018 there were a little over 32.3 million workers in the paid workforce. The biggest single category was ‘Professional occupations’, which accounted for 6.5 million of the total. If we take both this category together with ‘Associate professional and technical operations’ (the second-largest category) these two account for 11.2 million workers, more than one-third of the total.
Chart 1 below shows the ONS categories of employment at April-June 2018, ranked according to size.
Chart 1. UK Occupational categories at April-June 2018, millions 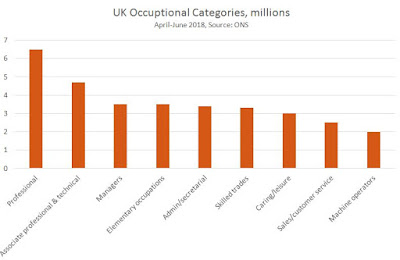 This current composition of the workforce is a product of enormous changes in a relatively short period of time. In 17 years, the British workforce has been transformed. In April-June 2001, there were a little over 27.6 million people in the workforce.  The current total represents an increase of 17%, or 4.7 million workers.

Elsewhere, some other occupational categories have declined in number. Managers, Admin/Secretarial and Machine Operators have each seen job losses of 300,000. Chart 2 below ranks the changes in those job categories since 2018.
Chart 2. UK Changes in Occupational Categories in the 17 years to April-June 2018, millions 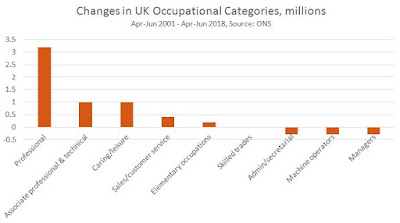 Managers have declined as businesses have set out to ‘de-layer’ management structures to achieve greater profitability. Admin and secretarial jobs have declined as part of that process, and with the growth of personal computers as a key tool for an increasing number of jobs. Machine operators have declined with the dearth of manufacturing and related industry investment.

Other important changes have also taken place, aside from these skills-based changes. Table 1 sets out some of the key changes in the composition and terms of employment over the same period. Rounding means some categories will not sum to the total.

Source: ONS
There have been important changes across the board. The proportions of workers categorised as self-employed and part-time have both increased in the workforce as a whole. The number of workers on zero-hours contracts has quadrupled over the period. And, while this is still a very small proportion of the total workforce, it represents a long-term threat to the pay, conditions and organisations of the labour movement.

The conscious and persistent efforts to widen the casualisation of the workforce have registered some victories over the period. Despite this it is important to note that the biggest single change in the workforce has been in the growth of full-time workers, representing more than two-thirds of the total increase.

One important development is the relative growth of women in the workforce. This is a gain for all workers as women’s greater participation in the workforce tends in the direction of greater collective provision of domestic and carer chores, even though austerity has pushed sharply in the opposite direction. The biggest gainers are women themselves who can be liberated from financial dependence and domestic drudgery through paid employment, although of course this is not necessarily automatic.

Important as each of these changes are, numerically by far the largest change has been the growth in the categories of professional workers (Professional and associate professional technical ONS designations). These are therefore worth examining in greater detail.

They are not ‘Managing Directors’, senior bank executives, or managers of NHS Trusts and so on. These are in the first ONS category of Managers, Directors and Senior officials, and their number has sharply declined over the period, as shown above. Instead, they are teachers, doctors, nurses, accountants, finance and ICT professionals.

They are overwhelmingly employed (9.66 million), full-time (9 million) and increasingly women, now making up almost half of these two categories (47.7%). 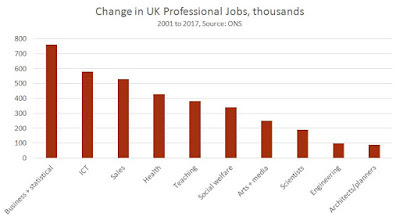 Source: ONS
The biggest single increase over the period has been in business, finance and statistical occupations, a rise of 760,000. But taken together, ICT and sales professional categories have risen by 1.13 million combined. In addition, health, teaching and social welfare jobs have increased by slightly more than these, for a combined total rise of 1.15 million.

Clearly, there are different trends at work. The growth of the already outsized British finance sector has continued, registering little impact of the financial crisis. In addition, the tightening or at least greater complexity of the regulatory and accounting regime governing British firms continues to generate jobs, although the performance of British firms or their regulation has not noticeably improved. But firms are also increasing their capacity in certain limited areas, such as IT and in sales. At the same time, certain key (mainly public sector) jobs continue to grow in health, teaching and social welfare (including social work and housing).

Total public sector employment has been reduced by just over 200,000 over the period to over 5.3 million. This represents a decline from 20.1% of the workforce to just 16.5%. Higher union densities in the public sector mean that union memberships have also been hit as a result. Of the only two Professional categories that registered declines over the period one was the civil service, the other was research.

The occupational categories used by ONS are based on skill levels required to perform the job (not the skills of the worker, which can be far higher). But when they were initiated they also tended to indicate income and to some extent social position. ‘Professions’ had distinctly better pay and conditions than manual workers.

The current categories were re-designated in 2010 to reflect changing skills (nursing saw a big rise in required skill levels) but the current types of classifications were introduced in 1990. Other versions go back much further.

Unfortunately, political debate in this country is often confused by reference to those much older versions. In particular, pollsters use the ABCDE categories of occupations (with C split into 1 and 2), which purport to assign views by class. This is wholly spurious.

These categories are over 50 years old and are tool of advertising analysis used by publishers and advertisers in the National Readership Survey, solely in Britain. These are completely non-Marxist, that is non-scientific categories. It is arguable that there may have been some alignment between these categories and social classes when the NRS was formulated, but now they lead only to utter confusion.

For example, pollsters, centrist commentators and outright enemies of the left argue that Labour has lost the working class, because it won the ABC1 categories in the 2017 election. This is despite the fact that the ABC1 categories includes teachers, doctors, nurses, IT workers, as well as mechanics, electricians, brickies, butchers, bakers (alas, no candlestick makers).

The categories C2DE include both lesser-skilled workers, as well as those at the margin of the workforce and pensioners. It should come as no surprise to any observer of British politics that, unfortunately, pensioners overwhelmingly do not vote Labour.  They are also the single biggest category, with over 12.5 million pensioners in the UK.

Labour’s policies to attract pensioners deserve a lot of work. But it must first be recognised that there is a political hostility to a left leadership of the Labour Party which currently increases with age. In fact, age is almost the single most reliable indicator of voting intention. It was one of the great feats of the Corbyn 2017 general election campaign to massively increase the turnout in younger age groups who had increasingly been disinclined to vote.

Similarly, it is widely arguedthat the Leave vote was a workers’ vote on the same spurious basis, and that the Remain vote was concentrated among the liberal, metropolitan elite. Northern Ireland and Scotland are not normally included in such categories, and they both voted Remain by some margin. So too did most of the cities including London, Leeds, Glasgow, Edinburgh, Bristol, Manchester, Cardiff and Belfast, Leicester and Newcastle. In general, workers live in cities and predominate there.

None of the arguments using NRS categories as a substitute for class analysis turns out to be correct. They cannot. This is because the NRS is a peculiarly English obfuscation of class, similar to blue and white-collar, or accent or (formerly) which newspapers people read.

Class categories are actually based on social relationship to the means of production. Owners of the means of production are the capitalist class. Those who own virtually nothing except their own labour which they are obliged to sell are proletarians.  Others form intermediary layers. The last several decades have in part actually been characterised by the proletarianisation of many professions, including teachers and doctors and other medics, as well as the numerical growth of those professions.

As workers are the exploited class all sustained social progress rests on their shoulders. They must take up all instances of oppression and discrimination to make progress, and to create the alliances necessary to advance.