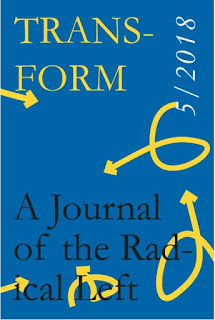 Get your copy here.

Ten years on from the near-collapse of the global financial system in 2008, there is little sign of capitalist recovery and renewal. The consequences of the austerity policies pursued by so many governments are now playing out: from the destruction of the social and economic gains made by working people over many decades, to the rise of the far right, the crisis of social democracy and the ‘weaponisation’ of racism and Islamophobia.

Right-wing forces, given succour by an increasingly belligerent Trump White House, have often emerged stronger from the crisis, but left and progressive forces have also challenged for power, posing political and economic alternatives. Unfolding political developments and new mobilisations in Britain and elsewhere demonstrate that the right is being fought and can be defeated.

Transform #5 looks at the continuing economic crisis, with articles on the Lehman crash of 2008 and how we can tackle the power of big finance; Corbyn’s economic policy in the context of the attacks that lie ahead; economic lessons from the left governments in Latin America; and how we can learn from the struggles against neo-liberal globalisation. We also take a look at the big global strategic issues: the implications of Trump’s trashing of the Iran nuclear deal, how the differing approaches of Trump and Xi Jinping are playing out, and an assessment of NATO at 70. The political impact of film propaganda is considered through a case study of Nazi cinema, the latest issue of Socialist Register is reviewed, and we pay tribute to the late, great Samir Amin.