The level of consumer price inflation (CPI) accelerated to 3.7% in December from a year ago. Retail Price Inflation (RPI), which also includes housing costs and other items, is rising at the even faster pace of 4.8% year-on-year.

The current pace of inflation compared to income increases is disastrous for workers and the poor. Average weekly earnings are growing at a much more modest pace of 2.1% year-on-year. This earnings growth is set to subside further in 2011 under the impact of public sector pay freezes and local government pay reductions. In addition, growth in private sector pay is likely to slow further under the impact of rising unemployment and as companies look to rebuild profit margins.

Mainstream economists talk of a ‘demonstration effect’ whereby it is hoped that public sector pay cuts will drive down private sector pay levels. It is this effect that the government is clearly hoping for. There is too the insufficiently understood change to the calculation of most benefits away from RPI towards the CPI, which would currently leave benefits falling 1.7% in real terms, even before any actual cuts take effect.

Taken together, flat wage growth and sharp rises in the cost of living amount to a significant reduction in the real living standards of literally millions of people – the overwhelming majority of society. Put another way, the Tory-led Coalition’s cuts this year of £41bn are equivalent to a reduction in national income of 2.7%. But the gap between prices on the one hand and pay and benefits on the other is likely to be even greater.

The January data will record the effects of the VAT hike and well as increases in fares from the mainly privatised public transport system. A series of formerly public utilities such as gas, water and electricity companies have been allowed to increase their tarriffs way above the rate of inflation, while train companies are much better treated than benefit claimants- being allowed to increase fares by between 1% an 3% above the RPI, not the lower CPI .

This is highlighted in the most recent inflation data, where the single biggest rise in prices over the last 12 months is transport, up 6.5%, followed by food and drink at 6.1% and alcohol and tobacco at 5.8%. In addition, the government’s own changes to indirect taxation have pushed prices considerably higher.

This is shown in Figure 1 which, alongside the RPI at 4.8% also shows the official CPIY measure of inflation which is currently at 2%. CPIY is the Office of National Statistics’ measure of inflation excluding changes in indirect taxation such as VAT. The gap between two is a measure of the government’s role in raising the price level. 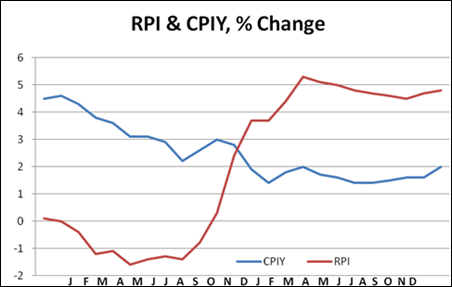 This is not to say that price rises are solely the responsibility of government policy. The UN’s Food and Agriculture Organisation says international food prices are at an all-time high having risen 30% in the last 6 months, and other commodities prices have also soared. Many of these price rises have yet to impact on the later stages of the production chain. An example is cotton, the price of which has more than doubled in the last 12 months, and will begin to impact on clothes’ prices only later this year.

But the inflation effects of indirect taxes mean that the government has room to soften the impact of the prices rises by reversing its own increase in indirect taxes. Cutting the VAT rate would reduce prices and increase disposable incomes for all, especially the poor. It could easily be paid for by reversing the tax cuts made in the June 2010 Budget- cuts to the corporate tax rate, small business profits’ rate, employers’ National Insurance and the freeze on the upper earnings limit on National Insurance for the highly paid. All these measures and more – to benefit the owners of capital and the highly paid – were a tax giveaway approximately equal to the VAT hike, which hit the poor hardest.

Those cuts represent a government policy that is not concerned with deficit-reduction but with a transfer of incomes for the poor to the rich. In addition, the campaign for higher Bank of England interest rates is well under way and supported by the Tory-led Coalition, as SEB has previously pointed out. Financial markets are now pricing in three interest rate hikes this year of 0.25% each, which will prove disastrous for mortgage-holders and many others.

The immediate effect of the strong Sterling campaign has been to increase the value of the pound. Versus the US Dollar, the pound has risen from 1.53 at year-end close to 1.60 in a matter of weeks. British-based banks are awash with cash as private sector surpluses have soared under the impact of growing profits and the financial assets of the rich. They have no intention of investing this productively in the British economy, and instead seek to buy overseas financial assets. A knock-down price can be achieved if the pound is much higher.

Yet even before rate rises the economy will struggle to maintain its modest momentum in 2011, as that was generated by the rise in government spending from Labour’s policies. This government’s hopes are pinned on rising exports but its support for higher rates and a stronger currency will hit the brakes on any export drive.

The Great Depression was characterised by the polices of high interest rates, overvalued currencies in key countries, and the drive towards balanced budgets- all aimed at pushing down wages and designed in this country to meet the specific needs of finance capital. Thankfully this time, strong growth in other areas of the world economy, led by China, India and Brazil will serve to prevent a repeat of that on a global scale this time. But no thanks to this government, which is determined to replay the crises of the past.