.615ZWhy the British economy shrank in the last quarter

The fact that British GDP actually contracted by 0.5% in the 4th quarter of 2010 shocked many observers. It meant a decline after a year of moderate expansion. The fall means the British economy is now at a lower level than it was at the end of 2008, less than half way through the recession. The consensus among surveyed economists was that the economy would grow by 0.5% in Q4 – but even this would have represented a slowdown from the previous, modest pace of economic recovery. This is illustrated in Figure 1 below, which shows the slowing trend of the economy even before the latest awful data. 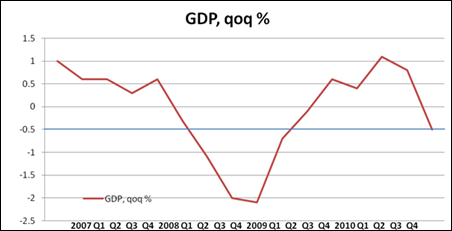 The government attempted to dismiss the data as simply reflecting the effects of severe weather at the end of last year. But Joe Grice, head of the Office for National Statistics (ONS) says that their best estimate is that the economy would have recorded zero growth in the quarter without the extreme weather conditions. Although this is not outright contraction, it is clear from the ONS statement that the underlying trend towards a marked slowdown in the economy continues.

The question remains as to why the economy is on a slowing trend, especially as it is just 1 year into a modest recovery after the deepest recession since the 1930s? To analyse that it is important to examine the prior data. The first snapshot of the GDP data is simply an output measure, with limited detail and information on allocation of incomes or sources of expenditure. There is too no fine-grained data on the monetary value of GDP in the first release, so here only the data up to the third quarter of 2010 is examined, before the economy contracted once more.

In Figure 2 the real monetary value of GDP and its components is shown, from the peak level at the beginning of 2008 to Q3 2010. 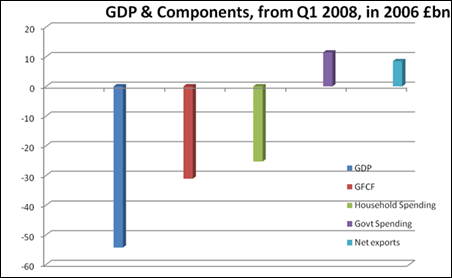 From the peak of the boom in Q1 2008 to Q3 2010 (the most recent data, which excludes the contraction in Q4) real GDP has fallen by £54.3bn. The major contributor to this slump remains the decline in investment, Gross Fixed Capital Formation (GFCF). It fell by £31.1bn, or 57% of the total fall. Household spending also fell by £25.3bn as falling real incomes, rising unemployment and expectations of worse to come all took their toll. But this is less than half the decline in investment. Offsetting those declines somewhat is the small rise in net exports, up £8.5bn. But the major upward contributor has been the increase in government spending, which rose by £11.4bn.

Clearly while investment has been the main source of the recession, government spending has been the main prop for the recovery. But in the national accounts data the level of GFCF from two sources, the private and the public sectors are brought under the same heading. This conforms to national accounting data in the EU and elsewhere. But in the US GFCF is separated into private and public components (as well as further subdivided into housing etc). If the same distinction is made between private and public investment in Britain, an even more striking picture emerges. This is because government investment was more than rising even while total GFCF was contracting.

Over the course of the recession, as we have already noted, total GFCF fell by £31.1bn. But within that total, private sector investment fell by £40.4bn, while the government’s own investment rose by £9.3bn. This took the form of increased capital spending in areas such as the “Building Schools for the Future” programme, as well as hospital refurbishment and infrastructure investment and was part of the Labour government’s 2009 response to the crisis.

This distinction is shown in Figure 3. The category of GFCF has now become private sector GFCF, while government spending is comprised of government current spending as before plus the increase in government investment. 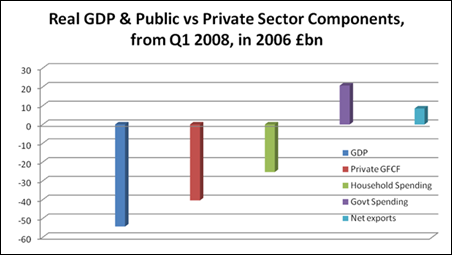 From Figure 3 it can be seen that the collapse in private sector investment is almost entirely responsible for the economic crisis- £40.4bn of a decline of £54.3bn, or three-quarters of the entire slump. If we take the total contribution to growth of government spending – both current spending and the public sector’s contribution to GFCF this rises GDP by £20.7bn.

This means that the economic contraction would have been far more severe without the rise in government spending.

It is known that government spending will decline under the Tory-led government. In fact current government current spending did contract in Q3 as the cuts policy began to be implemented. The fall was just £1.1bn, but it was the first such decline since the recovery began. The Q4 data will no doubt produce a larger cut in government spending, with further, steeper falls to come in 2011. Meanwhile the Labour government’s increased investment programme, which takes slightly longer to implement, will soon be crashed into reverse.

What Caused the Recovery?

Looking now at the earlier economic recovery, which ran for 4 quarters between Q4 2009 and Q3 2010, the total rise in output was £34.3bn from the low-point of the recession. The total rise in government spending during the recession and recovery amounted to £20.7bn. While much of that increase took place before the recovery began it will have been crucial in supporting the resumption in household consumption through welfare and other payments. In addition it will have fostered the rebound in GFCF as the private sector was encouraged to resume investment. In the one year long recovery, household consumption rose by £16.4bn, while GFCF rose by £12.0bn. Total government spending, including its contribution to investment was therefore directly responsible for 60% of the recovery – £20.7bn of a total increase of £34.3bn. Given the positive indirect effects on other categories of activity, it is no exaggeration whatever to say that government spending was responsible for the recovery.

It is clear now why the economy is slowing sharply. Osborne would like to blame it on the weather. But the reality is not a weather effect – as the ONS points out. There may well be a rebound in Q1, which would be unsurprising as some activity postponed in Q4 will take place now. But by removing the key prop to growth, in the form government spending, it is certain that the latest two quarters combined, Q4 2010 and Q1 2011, will see much slower growth on average than mid-2010. And 2011 will also see the effects of the VAT hike and widespread price increases which will all produce a sharp contraction in real incomes. Major cuts to capital spending are planned while benefits will be slashed in April.

It is easy to forget that the Tory-led government policy is dressed up in the name of deficit-reduction. But the deficit has been falling under the impact of stronger growth, itself induced by increased government spending. In the 2010 calendar year the borrowing requirement was £148bn, compared to a Treasury projection of £178bn for the Financial Year.

The policies of the Tory-led Coalition threatens to send both the economy and government finances into reverse.