In George Osborne’s Budget in June 2010 it was announced that the rate of corporation tax will be cut in a series of steps from 28% to 24%. This was part of a series of measures which, it is claimed, would boost growth. In fact they comprised part of a series of tax cuts for companies and the highly paid which amount to a giveaway of £12.4bn in 2014/15, almost exactly equal to the yield from the VAT hike of £13.45bn – which in contrast will come overwhelmingly from the pockets of the poor.

But, just as the package of tax measures are not about deficit-reduction at all, but a transfer of incomes from the poor to the rich, so the claim that lowering tax rates will lead to growth is also incorrect. The claim is that lower taxes increase the flow of Foreign Direct Investment (FDI). But the recent FDI Barometer produced by Think London, the agency that promotes FDI in London, shows that overseas investors are less likely to invest in London, not more likely because of recent developments in UK economic policy. In a survey of over 300 executives responsible for making FDI allocations, 60% said the lower tax rate would not change the attractiveness of London as an investment destination, 13% said it would make them more likely to investment, but 22% said it would make them less likely to invest. Therefore a net balance of 9% said lower corporate taxes would make London less attractive to investors!

In fact those surveyed were much more agitated about racist immigration policies – with 48% opposed to the Tory-led Coalition’s cap on non-EU immigration.

This is because FDI is not driven by corporate tax rates. At one end of the scale the highest corporate tax rates in the OECD are imposed by the US and Japan at 39%. Germany has a 30% rate. The lowest rates are in Iceland (15%) and Ireland (12.5%), which should be more a warning than a model!

FDI, in common with all investment, is driven by prospective rates of return. Some factors, such as geographical location are outside policymakers’ hands. But the quality of road, rail, air and port infrastructure are not. Likewise, the size of the market is outside policymakers’ hands, except over the very long run, but economic growth rates are not. In particular, studies repeatedly show that it is the quality and skills of the workforce that is the main policy-driven factor in attracting FDI.

Ireland, with the lowest corporation tax rate in the OECD, demonstrates this reality. It is an article of faith for the Dublin government and its supporters that the 12.5% rate is the key to attracting FDI. Both the Taoiseach Brian Cowen and the Finance Minister Brian Lenihan have taking to describing it as “our international brand”. In the 1998 Budget (introduced in December 1997) their predecessor as Finance Minister, Charlie McCreevey, introduced the legislation for a new regime of corporation tax that led to the phased introduction of the 12.5% rate of corporation tax from 1 January 2003 – down from 32%.

Figure 1 below shows what actually happened to FDI in Ireland before and after the cut to 12.5% corporation tax. In the period since the corporation tax was slashed there have been many quarters where there was a net outflow of FDI and the annual average total was an inflow of just €2.3bn. Before the rate was cut that annual average inflow was €17.7bn, and there was only one quarter of net outflow in FDI. 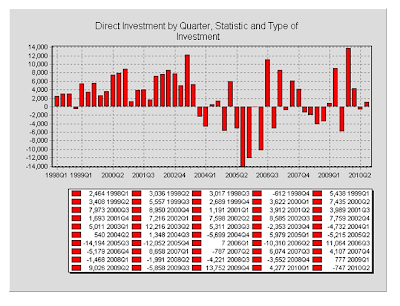 If FDI were measured relative to either the level of GDP or as a proportion of total investment, the before and after contrast would be even starker.

Clearly, low corporate tax rates did not leads to higher inflows of FDI, and are not responsible for it. But over a prolonged period the Irish economy has had a much greater share of world FDI inflows than would be suggested by the small size of the domestic economy.

Figure 2 below shows one of the main reasons why that is the case. It shows the percentage of the 20-24 year old population in EU countries who achieved at least an upper second level education. Ireland comes out top. 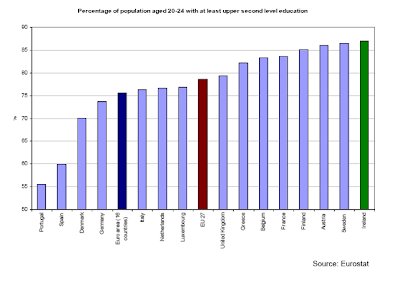 This also helps to explains why FDI investors don’t relish tax cuts. They aren’t fools. They know that low-tax economies do not have the resources to pay for investment in infrastructure, transport links and above all education- the factors that actually attract FDI. Low corporate taxes therefore do not attract, even deter FDI, as the London survey and the Irish experience demonstrate.

But George Osborne is a long-time fan of his fellow Thatcherites in Ireland. In fact the current Dublin government has far more fans in Downing Street than in Ireland, with its opinion poll rating dropping to 14% even before the latest resignations of nearly half the Cabinet. Determined to emulate the effects of Ireland’s Thatcherite economic policymaking, the Tory-led government has set out a course to lower corporate taxes. This will not attract FDI, but it does have the effect of allowing established companies to retain a greater proportion of their profits- and lowering wages and increasing capital’s ability to generate profits remains the essence of government policy. Reality shows there will be no increase in FDI to Britain due to lower corporate taxes.2