Trying to learn from what worksBy Michael Burke

Facts can be a very severe judge. Either economic structures, the models used to explain them and economic policies work, or they don’t. The factual verdict alone can determine who was right, what was successful, what economic system works best.

The chart below is reproduced from The Economist. It shows the change in the IMF’s own estimates and forecasts of the level of US and Chinese GDP. Previously the IMF’s projections were that China would surpass the US as the world’s largest economy in 2019. Its revised estimates are that this will now occur at the end of this year. From 2015 onwards, when anyone refers to the world’s largest economy this will be China, not the US. 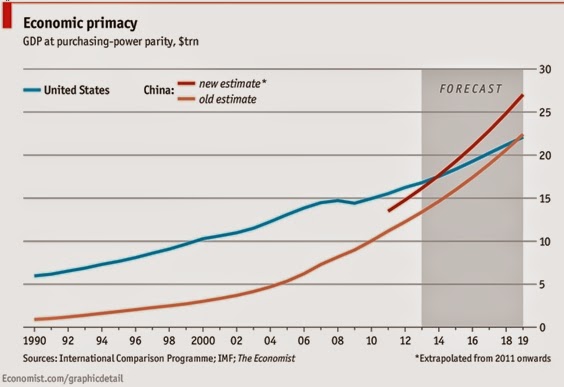 By any standards, this is a momentous econmic event. The leading position in the world economy does not change with great frequency. The US surpassed China’s GDP at some time around 1890, having already overtaken Britain in in 1872. (The Financial Times is incorrect to place this earlier data as the key turning-point- it seems to have ignored China altogether).

In this sense the current reversal is a return to the norm. China’s economy, with a population of 1.3 billion people should be larger than the US. At the same, this higher population level means that per capita GDP is still much below countries like Britain or the US, although this gap too is narrowing rapdly.

As a result, it would be foolish to argue Britain should ‘copy’ China. Different geographies, different relationships with the world economy, different histories and different levels of current economic development would make that an impossibility.

But the Chinese economy has delivered exceptionally strong growth, and grown much more rapidly than the Westen economies over a very prolonged period. In 30 years of the process of reform and opening up from 1978 to 2008 it has raised average living standards from the British level of the 15th century to the same as Britain in 1948. No doubt the advance since 2008 has been equally impressive (probably to something like the early 1960s in Britain).

Larry Elliott in The Guardian points out that Chinese per capita incomes are still way below those of the US. This is true. But the divergence in these trends is also marked. The population of the US has been growing more rapidly than China, while the US economy has been growing much more slowly. This had led to two effects. The first is that in the same 40-year period Chinese per capita GDP has gone from being approximately 5 per cent of the US level to over 20 per cent by 2008.

The second effect is that the growth in population is only a small fraction of the overall contribution to Chinese growth and is a very large contribution to US growth. This is shown in the Table below.

Mathematically, the effect of compounding is anything that grows annually by 5% will double in size every 15 years. On relative terms, if the current growth gap were maintained the Chinese economy would be double the size of the US economy by not later than 2030. Living standards will catch up later, only because the starting-point is lower.

It would seem foolish to wait until China has achieved living standards comparable to the richest countries in the world before recognising that something could be learnt from its continuous growth.

This is especially pertinent in Britain. The relative decline of the British economy has taken place over such a prolonged period, and had been so pronounced that there is an entire cottage industry devoted to discussing it. A Google search for ‘book + British economic decline’ yields an enormous number of results.

Yet the reality of Britain’s spectacular economic decline barely registers in public debate about the British economy.Currently a short-lived and debt-driven rise in consumption has been enough for public commentary to become dominated by claims about the strongest recovery in the G7. This is despite the fact that this is the weakest British recovery on record, and (except Italy) all the rest of the G7 have recovered more strongly than Britain.

In reality, economic analysis has mainly become a branch of commentary on the electoral fortunes of the Tory Party. It is no accident that both the electoral support for the Tory Party and the British economy have been in relative decline since the beginning of the 1950s.

By contrast, anyone wishing to produce policies that would improve British economic performance should study what has been happening in China for decades. There are a number of factors but the key driving force behind continued Chinese growth and improving living standards and British stagnation and relative decline is the proportion of GDP directed to investment. This is illustrated starkly in the chart below from the Office of National Statistics. This shows the proportion of GDP devoted to investment is selected major economies.

Britain has had the lowest share of GDP directed towards investment for many decades and it has been on a downward trend since the late 1980s. The Chinese ‘reform and opening up’ process began with exceptionally high levels of investment as a proportion of GDP and this has been on a rising trend. Although other factors are important, this is the main driving force behind the differential in growth and the change in living standards.

There is nothing inevitable about learning from the successes of others. It is quite possible to continue to muddle along with stagnation and decline for a very prolonged period. But ignoring reality cannot change it.
The facts are that China is an astonishing economic success, and Britain has experienced one of the most spectacular relative declines in economic history. Learning from the Chinese experience, and applying its lessons to the specific conditions of other national economies will be an important contribution to economic policy around the world in the decades to come.