The world’s largest companies are hoarding cash and cutting productive investment at the same time. The Financial Times reports a survey from one leading ratings’ agency, Standard & Poor’s, which shows that the 2,000 largest private firms globally are sitting on a cash mountain of $4.5 trillion, which is approximately double the size of Britain’s annual GDP.

Yet capital expenditure, or ‘capex’ by those firms fell by 1% in 2013 and is projected to fall by 0.5% this year. But this does not presage an upturn. Steeper declines in productive investment are projected by those firms in both 2015 and 2016. Taken together, if these projections materialise the actual and projected falls in capex over the 4 years from 2013 to 2016 will approach the calamitous fall in productive investment seen at the depth of the recession in 2009. This is shown in the FT’s chart below. 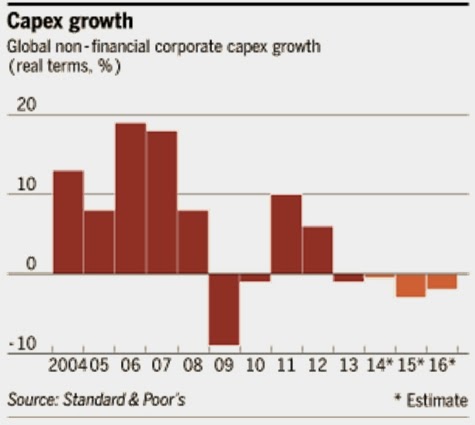 SEB has previously argued that companies are not prevented from investing by lack of access to capital or similar factors. They are sitting on a cash mountain. The same is true of British firms. There is plenty of money left, but firms refuse to invest it.

The survey findings are reinforced by recent research from investment bank Morgan Stanly, which focused on the US economy. It argued that there were two reasons to expect little improvement in productive investment. One is that the US economy is far below using all the existing manufacturing capacity currently available, so has little need to add new fixed capital. The second reason is that shareholders tend to oppose heavy commitments to new, large-scale investment. Managements that do not invest are rewarded by shareholders, while those that do are punished (lower share ratings, lower financial rewards for managers and ultimately, loss of job if the investment turns sour).

Contrary to mainstream economics, this indicates that the interests of shareholders are not ultimately aligned with those of society as a whole. Instead the interests of shareholders frequently stand opposed to an increase in productive investment, which is the key mechanism for raising productivity and living standards.
Or, as another investment bank shows, the greater the long-run returns to shareholders, the lower the growth rate of GDP, and vice versa. The chart below is from CSFB and has previously been used by SEB. It shows the relationship between average shareholder returns and average GDP growth over a number of countries from 1900 to 2013. GDP growth is strongest where the returns to shareholders are lowest, and vice versa.

Chart 2. Shareholder returns and GDP growth for selected countries, 1900 to 2013 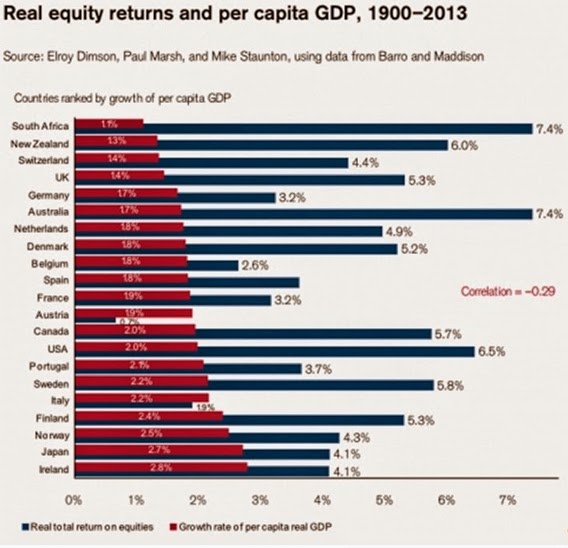 This has clear and direct implications for economic policy. The Tory-led government has attempted to encourage private sector investment with a series of inducements, bribes, subsidies, privatisations and so on. But it has not worked. 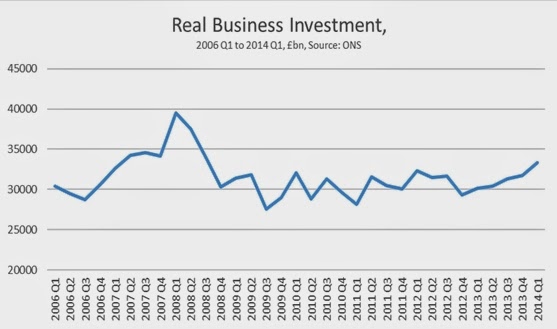 A continuation of the same policy is unlikely to yield different results. Instead a radical, reforming Labour government could direct investment itself, using the available resources. Even the current government has recently ‘fined’ Network Rail for to failing to meet its targets and will use the proceeds to upgrade wifi on the rail network, that is to engage in productive investment on a very small scale.

The same logic on a vastly greater scale could be applied to the problems of declining energy capacity and the need to de-carbonise the economy. Fines running into billions could be legally applied to the privatised energy companies if they fail to meet new legislative targets on investment in renewables and energy efficiency. The proceeds can then be used for direct state investment.

These and other methods could be applied to a series of key sectors, banking, energy, transport, health, education, infrastructure and so on. If the private companies still refuse to invest, government can use the fines to invest directly itself. In fact there are any number of methods of achieving the same objective. But, as the surveys and analysis from the financial sector show, the private sector currently has no intention of leading an investment recovery as profits have not yet recovered. So the state must lead an investment recovery.