Productive investment has not increased, so there is no sustainable recoveryBy Michael Burke

However, the fundamental character of the current crisis is unaltered by the revised data. The Office of National Statistics (ONS) is correct to state that, ‘The worst recession since our records began in 1948 has been followed by the weakest recovery’. The path of the current recovery is shown in Fig.1 below, an ONS chart which compares the level of GDP in previous recessions. 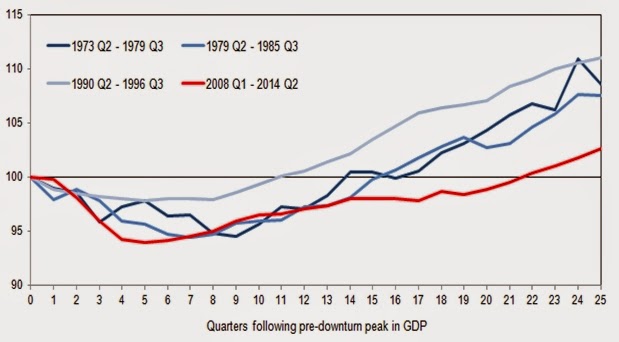 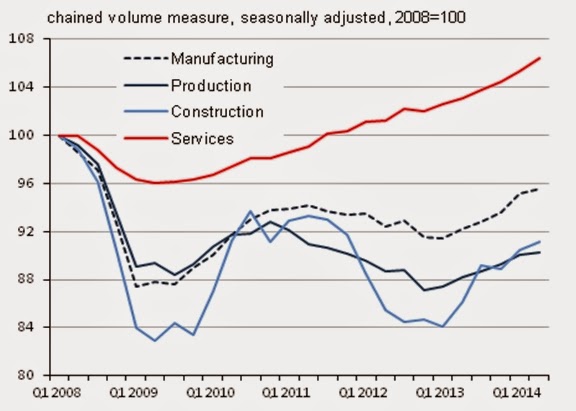 It is clear from this chart that there was a severe ‘double-dip recession’ caused by austerity which affected the productive sectors of the economy excluding services. A number of service industries were boosted by a combination of ultra-low interest rates and specific measures adopted by the government to boost consumption. The industries to benefit included finance, and retail and business services. Far from a ‘march of the makers’ promised by Osborne, the current situation is repeat of the errors of the Lawson Boom and the ‘candy-floss economy’, on a much weaker basis. The former Tory Chancellor argued that it was immaterial that manufacturing was collapsing under Thatcherism as long as there were overseas buyers of any good or service produced in Britain (including candy floss, in reality financial services). This was before the boom turned to bust.

The disparity shown in the different sectors of the economy is a function of the great divergence in the components of GDP. All the main components of GDP have now surpassed their level when the recession began in 2008 except for investment. Household consumption, government expenditure and net exports are all higher, only investment (Gross Fixed Capital Formation, GFCF) remains below its previous peak. The change in GDP and its components in the recession is shown in Fig. 3 below.

Fig.3 Change in Real GDP & components since the recession began 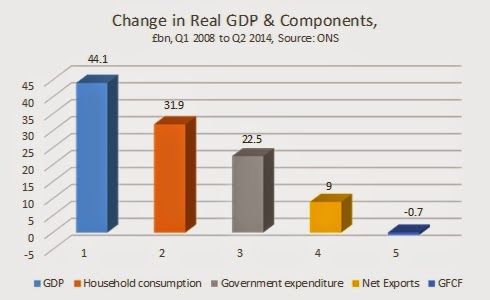 Key parts of the service sector can grow without significant investment, at least for a period. Industry, manufacturing and construction cannot. Investment is the main brake on the economic recovery. It is not the case that the crisis is caused by a deficiency of ‘demand’. Both household and government consumption have risen but investment is still below its previous peak. Previously, the decline in business investment was mainly responsible for the decline in GDP. But that is no longer the case.

Business investment declined far more sharply than the economy as a whole, down 23% from the peak to the low-point in 2009, compared to a 65 decline for GDP. But it has now made a feeble recovery in line with GDP. 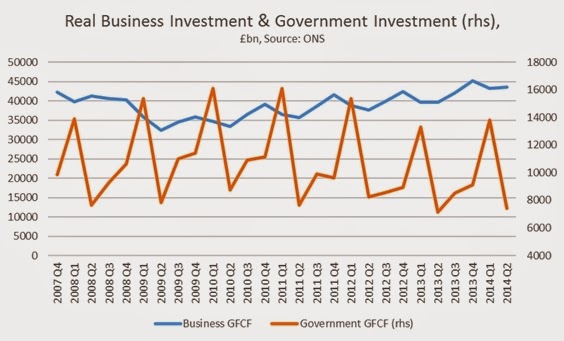 This illustrates a central plank of the austerity policy. The decline in business investment proceeded the recession, driven by a declining rate of profit. (This point ought to be wholly uncontroversial as even the mass of profits fell in nominal terms at the beginning of 2006). After the fall in profits in 2006 the level of investment in the productive sectors of the economy began to decline and then fell rapidly producing the recession. For the period which includes most of 2006 and 2007 this decline was masked by the last stages of a housing and financial bubble. The level of real investment in the productive sectors is shown in Fig.5 below. 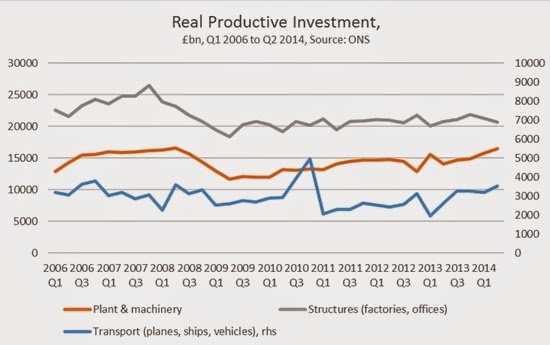 This important decline in the productive capacity of the economy is masked by the statistical practise of referring to Gross Fixed Capital Formation in its entirety, which includes both productive investment and other large items such as residential investment and the transaction costs of investment in buildings, including estate agents, surveyors and the like. While these may be necessary and can provide a social good, they do not increase the productive capacity of the economy.

None of the productive sectors has yet seen a recovery in the level of investment from their peak level. Investment in offices and factories is the largest component and is 16.4% below its previous peak, a fall of £23.1bn.

There is therefore no ‘puzzle’ at all to the crisis of productivity in the British economy. The productive capacity of the economy is not growing and may even be declining once capital consumption and real depreciation are taken into account. If more labour is deployed, which is the case currently, output can increase. But if the productive capital of the economy is stagnating or even contracting, then this can only be reducing average output per hour. This is the underlying cause of the crisis of living standards and of real pay. Workers are working longer in less productive ways and so are being paid less.