The scale of cuts set out in George Osborne’s latest Autumn Statement are so large that they are quite unfeasible without a fierce attack on public spending, services, jobs and pay over the next five years. Even in the likelihood that targets are missed the effect will be to deepen austerity and permanently embed it in the economy.

The Office for Budget Responsibility (OBR) forecasts the level of austerity in the next five years will be much worse than the last five. The OBR is extremely poor at economic forecasting as it shares the Treasury’s flawed economic model. It also consistently paints a favourable picture of the outcome of all government policies. Even so its closeness to government means that it is well placed to understand government intentions. It projects further cuts to government current spending equivalent to 4.8% of GDP in the next parliament. This compares to 3.4% of cuts in current spending under the Coalition. This is shown in Fig.1 below. In cash terms the cuts will increase from £35bn so far to another £55bn in the next parliament. 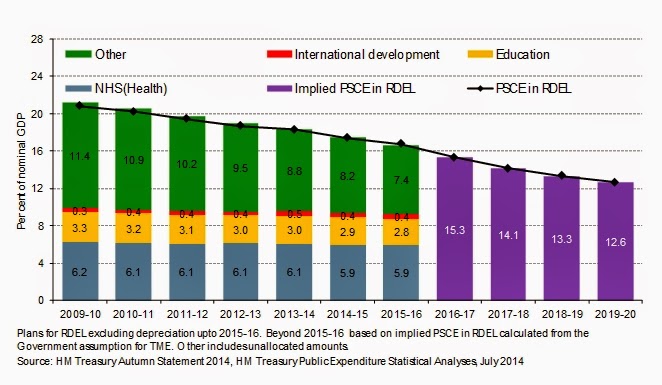 The government claims that certain key items of spending have been ‘ring-fenced’, which in reality means capped. The key capped items are spending on pensions, education and the NHS. As Fig.1 shows this still means education and NHS spending are falling as a proportion of GDP even though the population is both ageing and growing. The real education and health spending per pupil or per patient is falling, hence the rising waiting lists in both areas.

The Institute for Fiscal Studies suggests that the capping of these items means that other items in the budget will be cut by up to 40%. In previous austerity measures the scope for cuts was facilitated because of items of highly beneficial but non-essential services built up over previous decades. But the cuts to youth services, day care for the elderly, closures of public services have all nearly run their course. They have been highly damaging but now essential services are the sole real target for cuts.

The increased austerity totals outlined in the Autumn Statement will be much greater than the austerity to date. Their effects will be magnified because essential services are the main target for the cuts. They cannot be achieved without a ferocious attack on public services, public sector pay, jobs and pensions.

SEB has previously shown that business investment follows government spending and investment with a time lag. The false Treasury/OBR framework is that the state is an obstacle to the private sector. So, the OBR projects a sharp rise in business investment over the next 5 years, much faster than the recent period when activity is usually strongest in the recovery period. This is despite the fact that government spending is cut more deeply. The OBR forecasts for business spending are shown in Fig. 2 below and are compared to previous recessions. 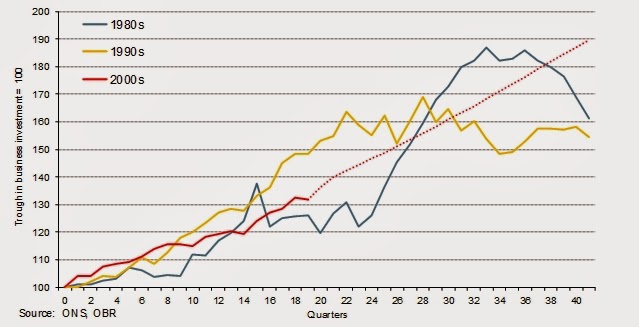 This surge in business investment (exceeded only by the unsustainable ‘Lawson boom’ of the 1980s) is projected to arise even though there is simultaneously a forecast profits squeeze. According to the OBR the Gross Operating Surplus of firms will grow by just 4.1% over the next 5 years in nominal terms. After inflation the real terms level of profits will fall. By contrast the Compensation of Employees is projected to rise by 11.1% over the next 5 years. Therefore both the wage bill and the additions to new capital will exceed the growth in the operating surplus. The profit rate will fall as a result.

These are simply outlandish forecasts. As firms invest in anticipation of increased profits the OBR forecasts are wholly unfeasible. This rise in business investment is central to the OBR’s projection of moderate but sustained growth, along with increasing household debt. Even so, its forecasts show a significant slowdown from current growth rates. The 3% growth in GDP this year is the best of the recovery even on the OBR’s rose-tinted view. In reality cuts on the scale envisaged would risk a much deeper slowdown or even recession.

Even if the government/OBR forecasts for the scale of the cuts prove to be unworkable they amount to a plan for permanent austerity, of ever deeper cuts. They are also a Tory trap for Labour, which has said it will also aim to balance the budget without challenging the framework that it is the investment strike and weak growth that causes the deficit.

Prior to the 1997 election New Labour signed up to Tory spending plans in the first two years. Politically the effect was that New Labour immediately lost 1.5 million votes in that post-election period, a third of the total votes lost over 13 years in office which ended in defeat in 2010.

Currently a Labour-led government is in no position to lose 1.5 million votes after May 2015. But the economic situation is fundamentally different to the position at the turn of this century. Increased government spending cushioned British growth from the general downturn in the industrialised economies in 2000. As SEB has previously shown, this reversal on spending was very partial. But with the tailwind of global recovery after 2000 economic crisis was averted. It was the stagnation of living standards which caused the attrition of a further 3 million votes for new Labour over the next decade.

This situation is very different. With a commitment to balance the budget by cuts, there is no scope to increase spending in the middle of the next parliament. The global economy is unlikely to provide as much support as most forecasts anticipate a slowdown. Crucially, living standards are not stagnating but declining for the overwhelming majority of the population. Without reversing policy abruptly this fall will in living standards will continue. Renewed austerity will accelerate the decline. The economic and political consequences are easy to foretell. If pointers are needed the political and economic fortunes of the current Socialist government in France can provide them.