The A&E service in British hospitals is in crisis. All health services come under pressure during winter as seasonal flus take their toll and some lead to more complicated conditions. But winter comes round every year and this is not an especially severe one so far. Yet hospitals across the country report increasing pressures and this is focused on accident and emergency services, not normally in the front line of winter demand. A more severe winter could produce a deepening crisis.

NHS England data shows that waiting times for A&E are now the worst in a decade. The Coalition reduced the previous targets for waiting times but even these targets have been missed. Only 92.6% of A&E admissions are being seen in under 4 hours, which means 3 out of every forty patients are waiting longer. Some of these emergency patients are waiting much longer. The data is shown in Figure 1 below. 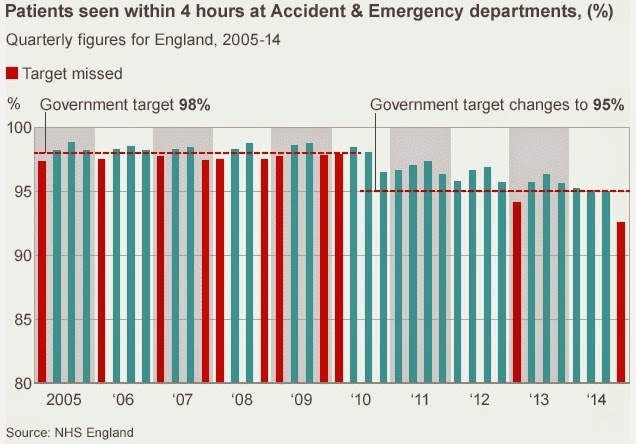 There is a significant campaign of misinformation underway, with the government attempting to escape responsibility for the crisis. But Dr Clifford Mann President of the College of Emergency Medicine was clear. He told Radio4 listeners that, “elective surgery is profitable. Emergency surgery will always be unprofitable and so hospital trusts have not invested in it.” The structural cause of the crisis is clearly the introduction of market mechanisms and principles into the NHS.

There is also a direct effect from austerity policies, which is the catalyst for the crisis. The government likes to claim that it has ‘ring-fenced’ NHS spending. But this only means that the cash total for the NHS is broadly unchanged. In effect NHS spending is frozen in real terms. But there is inflation in the health service (usually greater than the broader economy because of rising drug and equipment prices). In addition, the population is rising and it is ageing. There is an increased demand in terms of rising prices and rising need. Freezing spending inevitably leads to deteriorating services.

The fact that NHS spending has been frozen in real per capita terms is directly responsible for the immediate crisis.

The fall in NHS spending as a proportion of GDP is shown in the chart from the Office of Budget Responsibility (OBR) below. According to OBR projections the fall is likely to accelerate in future years.

Fig.2 NHS Spending as a proportion of GDP 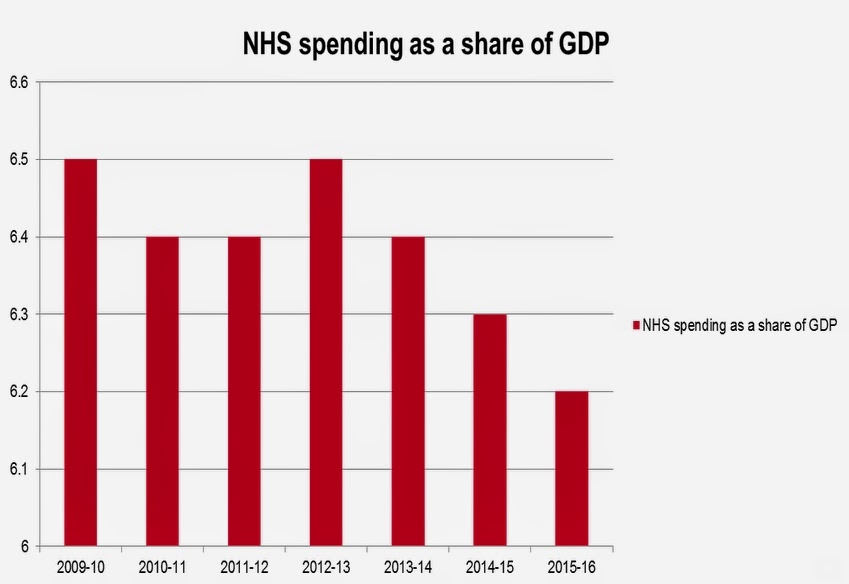 There is no mystery behind the crisis in the NHS. Structurally, the introduction of the market made crises inevitable and austerity has brought it about. Saving the NHS and providing a decent health service means ending austerity and removing the market ‘reforms’.