Official economic opinion from the IMF is that the US and the British are the only industrialised economies that are growing strongly and that their growth model should be reproduced generally.

The reality is very different. Both recoveries are the weakest on record and are fuelled by an unsustainable (debt-fuelled) rise in consumption. The international effects of this are negative, acting to provoke further instability in the world economy. The Anglo-Saxon recoveries cannot possibly be widely copied without deepening crises.

First, it is necessary to dispose of the myth that either the US or Britain is enjoying a robust recovery. In sharp recessions there is frequently a large amount of spare capacity in the economy as hours or jobs are cut and factories and offices lie idle or under-used. As a result, recovery from deep recession is often rapid. But that is not the case. Neither the US or British economies has accelerated beyond a 2.75% year-on-year growth rate in the entire recovery period. As a result, they are the weakest recoveries on record.

Fig. 1 below shows the current US recovery phase compared to previous recoveries. 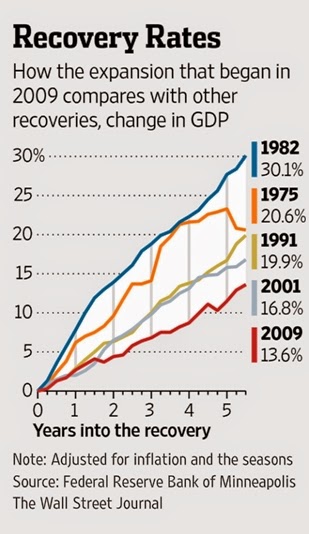 The US recovery is the worst on record as it is also worse than the recovery from the Great Depression. But the performance of the British economy is worse still, significantly slower than any previous recovery phase. 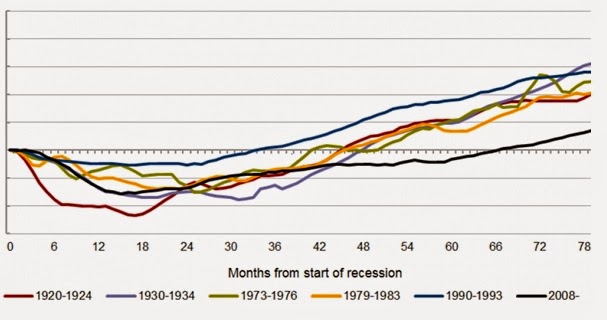 Recent trade data also demonstrates the underlying weakness and fragility of even these feeble economic upturns. The US recorded a trade deficit of almost $47bn in December and the British economy had a trade gap of £35bn for 2014 as a whole. These were, in both cases, a return to respective 4-year low-points.

The US trade gap is on a sharply widening trend once more, despite the much lower level of oil imports because of the shale gas boom. In real terms, after accounting for inflation, the US trade deficit excluding oil is at a record, as shown in Fig. 3. 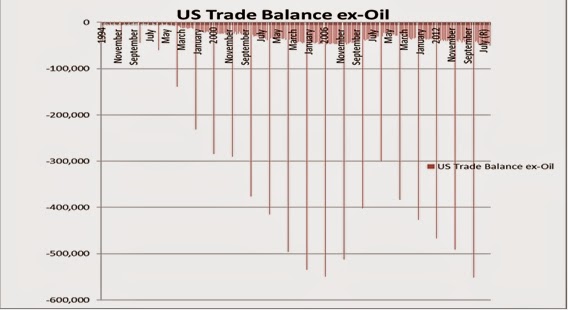 As a matter of logic the world cannot emulate an economy where the trade deficit is widening dramatically. The world cannot run a trade deficit with itself. Holding up the Anglo-Saxon recoveries as a model to be followed elsewhere is simply foolish, or overblown rhetoric which has no practical value in policy formulation.

The same increase in effective net overseas borrowing applies to Britain where there are new record deficits on trade balance and on the current account (trade plus current payments overseas, mainly interest and share dividends). In fact the situation is qualitatively more grave for the British economy, for a number of historical and structural reasons which will be examined in a future post. For now it is enough to note that that a very mild British recovery is being funded by record overseas borrowing.
The latest current account deficit is 6% of GDP, an all-time record.

In effect the weak British recovery is being funded by unprecedented borrowing from overseas. Because this has been a continuous process, it has also led to an unprecedented deterioration in Britain’s international investment position. The continuous accumulation of new overseas debts has formed a record level of overseas liabilities, which is shown in Fig. 4 below.

Fig. 4 Britain’s Net International Investment Position as a per cent of GDP 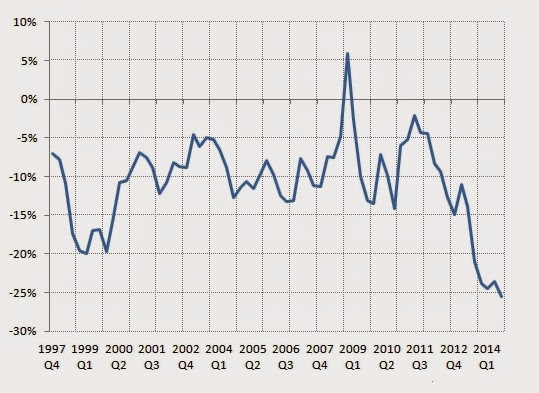 Both the US and British economies are uncompetitive even at previous exchange rates and are dependent on borrowing from abroad to fund recovery. But the funds they are borrowing from overseas are not being used to fund further economic expansion, via investment. Instead the recoveries in the Western economies are almost exclusively driven by consumption.

This is shown in Fig. 5 below, which shows the real change in both US and British consumption and investment since the recession began to the end of 2014 (Q3 in the case of the UK data). The data is shown in common US$ purchasing power parity exchange rates for comparative purposes. 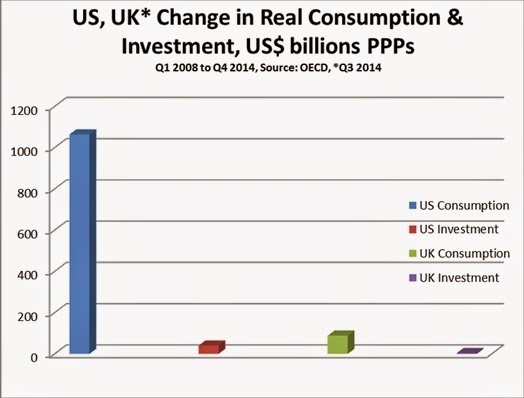 Complete data for the major industrialised countries has yet to be published. But any growth at all for either the Euro Area economy or for Japan is likely to have been almost entirely driven by consumption with investment either flat or contracting once more.

This is placing unbearable pressures on the rest of the world economy, the so-called ‘emerging markets’ and other non-industrialised economies. In part the rise in consumption in the industrialised countries is only possible because prices for basic commodities have fallen sharply. But it is also leading to capital outflow from poorer nations to richer ones, mainly the Anglo-Saxon economies to fund their increased consumption. This outflow of savings is preventing a rise in investment elsewhere, or significantly increasing the costs of that investment. This will both prolong and deepen the global economic crisis.

The industrialised countries as whole led by the US and copied by Britain are consuming, not saving or investing. This produces weak and unsustainable growth in their own countries and is causing a global slowdown and further crises.