David Cameron became the first elected politician in Europe to criticise the election of the Syriza government in Greece and was quickly followed by George Osborne. This might seem odd as Britain is outside the Eurozone and has limited direct influence over its policies. But the urgent and unrestrained nature of the criticism is very revealing about what is at stake in the anti-austerity struggle and specifically the very different roles being played by the British and Greek governments.

The Syriza government represents the popular will to end austerity. Only the parties of the left increased their vote in the recent election, and that was overwhelmingly to Syriza’s benefit with a rise of 9.4%. But entirely new parties and even parties of the traditional right adopted similar anti-austerity rhetoric in an effort to shore up their vote. The election showed the Greek popular majority wants to end austerity.

In Britain the banks have an extraordinarily large weight in the economy. Consequently, this dominance is felt through all areas of political and social life. A recent Global Financial Stability Report from the IMF (pdf) demonstrated the dangerously lop-sided nature of the British economy by focusing on ‘shadow banking’, the artificially created networks of companies and vehicles to disguise the real liabilities of the banks. In Britain shadow banking accounts for over 350% of GDP. The next highest exposure of all the industrialised areas or economies is the Eurozone at less than 200% of GDP. The phrase ‘too big to fail’ is insufficiently grave to convey the threat posed by the outsized level of British bank liabilities.

This explains the sudden and intemperate Tory interventions against the newly-elected Greek government. The British government represents the interests of British big businesses and the most important of these is the banks. The banks have sharply reduced their loans outstanding to Greek borrowers. As Martin Wolf the Financial Times’ chief economics commentator explained recently, the banks in general were the key beneficiaries of the bailout, not the Greek economy or its population. Since the €254bn bailout organised by the Troika just €27bn was to support the Greek economy. The rest went to creditors with British, German and Dutch banks at the head of the queue for the taxpayer-funded bailout. But the huge debt is incurred by Greek taxpayers, and so the debt burden is unbearable. 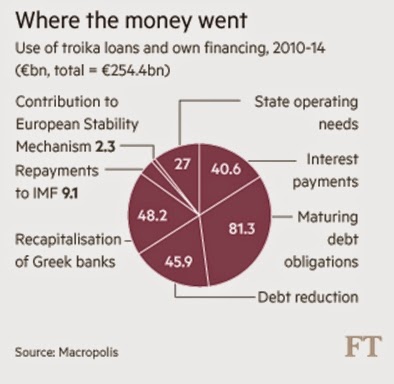 Recent data from the Bank for International Settlements show that bank loans to Greece have been edging higher again and that British banks have the biggest exposure at $10bn which is equal to the loans from German banks and ahead of US ones at $8bn. The chart below from the Breugel Institute shows the trend in national banks’ lending to Greece. 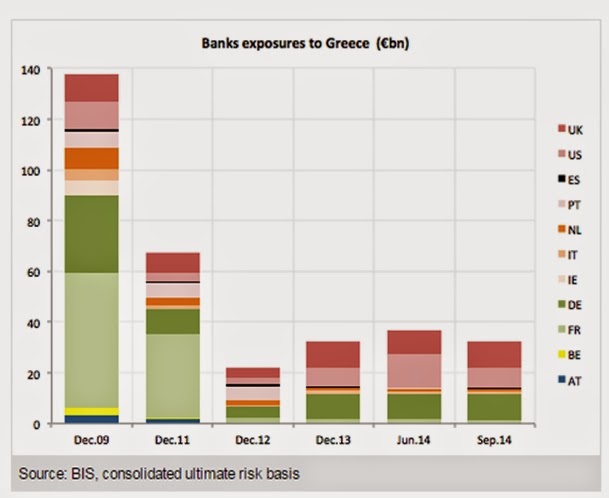 So there is an immediate concern for the British, German and US politicians who act on behalf on the banks. But Cameron and Osborne are not primarily protecting the immediate interests of British banks, who have already been bailed out of their far bigger failed speculation in Greek assets. They are trying to protect the strategic interests of British banks against popular claims for wider government debt reduction. British banks do have large exposures to countries such as Ireland, Spain, Portugal and others. Their fear is that Syriza represents the turning of the tide where multilateral agencies and their domestic allies can no longer burden the citizens of European countries with more debt in order to bail out failed bankers.

This is why everyone in Europe and beyond fighting austerity has a direct interest in Syriza’s success. It has the potential to free Greek society from the impositions of the banks and offer a new model to the whole of Europe. In Britain apart from those receiving huge bank bonuses and their hangers-on no one else benefits from these hugely bloated banks. In general they do not even pay dividends to shareholders. Cutting them down to manageable size by forcing them to take losses on government debt would be everyone else’s interest.

There is a particular onus on all those in Britain who want Syriza to succeed or who even simply support the democratic principle that the British government should not attempt to subvert the popular will of another country. We need to get the bankers and their British representatives off the necks of the Greek population.