The Coalition parties are set to feature deficit reduction as a central achievement of their time in office as part of the election campaign.

The economic crisis is driven by the excessive saving of the private sector – its refusal to invest. As the government’s deficit is a response to this private sector saving, cutting the government’s own spending is entirely the wrong approach. It is the weakness of the economy that has caused the deficit, not vice versa. The supporters of austerity look at the world through the wrong end of the telescope and demand we all do the same.

It is also the case that the Coalition has failed even in its own terms. The deficit has not been eliminated. The total deficit (excluding the effect of the public sector banks, that is their bailout) was £153.5bn in 2010 and had fallen only to £93.6bn in 2014. The deficit is far from being eliminated.

The discrepancy between the actual deficit and the forecasts made by the Office for Budget Responsibility (OBR) and the Treasury at the time of the June 2010 Budget is shown in Fig.1 below. The official forecast was that the deficit would be £60bn in the last Financial Year and would fall to £37bn in the current Financial Year ending in April 2015. The actual deficit has been very different.

It was £97bn last year and will be an estimated £90bn in the current FY. The government claimed it would reduce annual borrowing by £117bn and the fall has been just £63bn, approximately half of what was promised.

Fig.1 Official forecasts for the deficit and the actual outturn 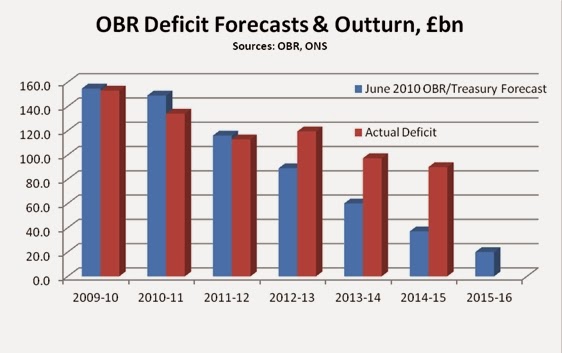 In addition the composition of the deficit belies any claim that austerity has led to an improvement in public finances. In reality a combination of accounting fiddles, reduced investment and inflation more than account for the entire reduction in the deficit to date. None of these are supposed to be part of the central design of austerity policies and none can be relied on to sustainably lower the deficit. This is the case when the entire debate about economic policy in the next five years is framed around even more austerity.

The factors reducing the deficit should be taken in order of magnitude. By far the biggest contribution to the £60bn reduction in the deficit has been the rise in VAT receipts, which have increased by £44bn over the period or by approximately two-thirds of the total deficit-reduction. The Coalition increased the VAT rate from 17.5% to 20%, but consumer prices have also risen by 12% in the 4 years to 2014. This implies that the contribution from increased VAT rates and inflation were approximately equal. Inflation has since subsided sharply and unless the pound falls again is unlikely to accelerate again in the near future.

Despite great fanfare from Osborne and Cameron on the need for investment, there has been no policy action that has made a larger contributor to the fall in the deficit than the cut in government investment. This is shown in Fig. 2 below. In total the fall in net public sector investment from 2010 to 2014 was £25.6bn. Even mainstream Tory opinion nods in the direction of the need for increased public investment and only the most extreme ideologues explicitly argue for cuts in this area. Even so this is the policy which has been carried out to massage the total deficit lower. It is also in the clear hope that the private sector will replace public investment, which has failed to take place. 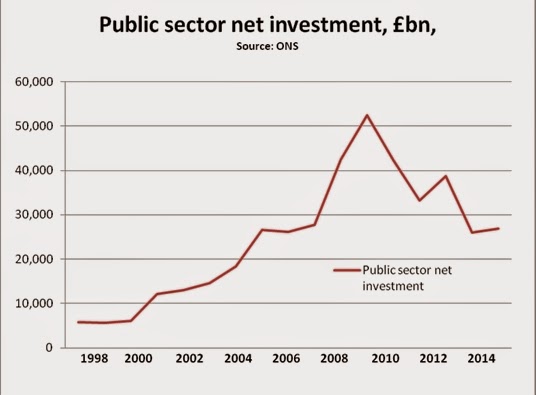 There have also been a number of accounting adjustments and outright fiddles which George Osborne has conducted in order to get the deficit numbers down and further measures of this type may be expected in the Budget later this month. Perhaps the most scandalous was the £5 billion ‘pencilled in’ from an amnesty for tax evaders agreed with the Swiss authorities which has yielded little more than £1bn. But the most substantial of these fiddles is the £8.7bn in 2014 (and £18.6bn in 2013) from the Bank of England’ s ‘Asset Purchase Facility’ which are part of the wind-down of bank rescue operations and nothing to do with current public sector income.

In other key items of revenue there are some important features. National Insurance Contributions have risen by 11% and £11bn reflecting the growth of employment during austerity. But the level of PAYE income tax has risen by just 5.9% (£7.7bn) as average pay has fallen and there has been no increase at all in the tax revenue on self-assessed income (mainly from the self-employed), despite more than half a million new ‘self-employed’ over the period. This confirms the trend of low-wage, casual job creation.

It should also be noted that Corporation Tax revenues which are levied on profits have actually fallen by £0.5bn over 4 years despite a £67bn rise in nominal profits. This reflects the cut in the tax rate from 28% to 21% which will further fall to 20% in April. The stated purpose of this cut was to spur growth by encouraging business investment. But SEB has repeatedly noted the fall in investment is the cause of the crisis and remains the main brake on any recovery. Instead, the combination of the VAT hike and Corporation Tax cut represented the key mechanism of austerity policies as a whole; the transfer of incomes from poor to rich and from labour to capital.

Austerity was severe – it just doesn’t work as claimed

In terms of expenditure items, the total is considerably below the projection first outlined by the Treasury and Office for Budget Responsibility in June 2010. It is therefore factually incorrect to state that austerity has not been implemented, or has been not severe enough. This is a fiction peddled by right-wing critics of the government. But in June 2010 the Treasury/OBR forecast that total public sector current expenditure would be £692.7bn in 2014/15 and in December this year they forecast that the outturn would soon be £671.7bn. This is also a much tighter spending policy than was planned given that inflation was higher than anticipated. Austerity was applied even more severely than planned. It simply failed to deliver deficit-reduction.

There was also a windfall to government accounts because of much lower debt interest payments as global interest rates plummeted. The British government in common with many others now receives money from investors who are lending to it, paying negative interest rates. This lowered government outlays by £27bn comparted to 2010 forecasts.

Yet the social security bill was also £28bn higher than officially forecast. This serves to highlight a crucial point made at the time by the opponents of austerity; that cuts aren’t savings. Given that the population continues to both increase and age irrespective of fiscal policy, it was always certain that outlays would grow. As austerity also leads to both slower growth and increased poverty then key items such as social security will grow automatically.

The change to total Public Sector current Expenditure and the two key components of higher social security and lower debt interest payments are shown in Fig.3 below. 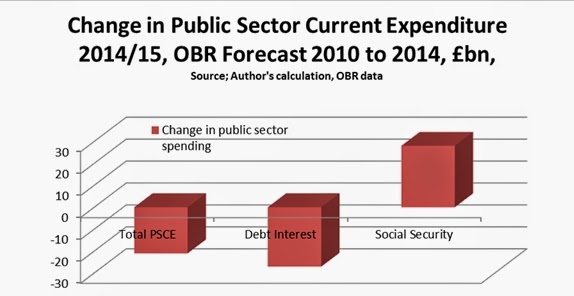 Austerity damaged the economy austerity and did not even lead to deficit reduction. The deficit has fallen due to growth – that itself has been stifled by austerity.

However this nominal growth has been much more comprised of inflation than real activity. This has created a one-off boost to VAT receipts, which is unlikely to be repeated. The main policy change leading to a lower overall deficit is the cut to public sector investment, which will prove highly damaging in the long run. That aside, the Chancellor largely relies on accounting tricks to massage the deficit lower.

There has been a very substantial windfall too from the fall in debt interest payments, in common with nearly all the industrialised economies. This reflects widespread economic weakness and fears of deflation. It is not a positive sign about growth. The cuts have been even more severe than was first planned by the Coalition when inflation is taken into account. But the supporters of austerity ignore the crucial point that it creates economic weakness, which in turn leads to both higher government spending and lower tax revenues.

The real cure for the deficit and for the economy is the same. Investment-led growth will produce a sustainable increase in economic activity and under those circumstances the deficit would take care of itself.