The Tory election campaign is based on the claimed success of the government’s economic policy, as the hype around the latest Budget confirms. In reality the Tories’ economic record has been unprecedentedly poor. Their economic policy is not primarily aimed at increasing growth or prosperity but rather at effecting a fundamental change in the economy which entails a very large transfer of incomes from workers and the poor to big business and the rich. This project is very far from complete and is set to continue.

The relative economic performance under the current government is shown in Fig.1 below. Real GDP has grown by an average of 1.65% under austerity policies. This is remarkably poor by comparison. In the 12 months before the current government took office the economy grew by 2%. Austerity lowered growth even from a feeble pace coming out of recession.

For the entire period from 1997 to 2010 the annual average real GDP growth rate was 2.1%. This includes the recession of 2008 to 2009, the deepest slump in activity since the Great Depression. Yet the performance of the economy under Tory austerity has been even worse 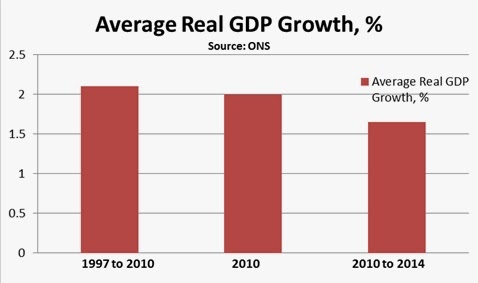 Einstein said repeating an experiment and expecting a different outcome is the definition of madness. Yet the intention is to repeat austerity. This is because the purpose of the austerity of policy is not to induce growth, or even to cut the deficit.

In the crisis profits fell sharply, even in nominal terms. The Gross Operating Surplus (GOS) was £86.2bn in the 1st quarter of 2008 and fell to £79bn in the 2nd quarter of 2009. At the same time the Compensation of Employees (CoE) fell by just £1.5bn (although in real terms both wages and profits fell by far greater amounts). Since that time and to the end of 2014 the GOS has risen by £16bn and the CoE has risen by £32bn. It should be noted that profits fell once more in the final quarter of 2014, as shown in Fig.2 below. 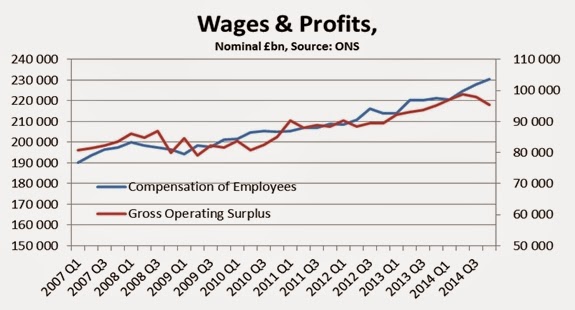 Despite the fierce impositions of austerity it has proven quite difficult to cut wages in nominal terms (although in real terms wages have fallen substantially). New austerity measures were also suspended after 2011 because of the slump in Tory electoral fortunes. Therefore the plan is to resume austerity with renewed intensity immediately after the election. Austerity is aimed at reviving the profit rate and this is nowhere near being accomplished.