Can the Lib-Dems save Tory Britain?

By John Ross
By now many pollsters admit they misread the election campaign. As Freddie Sayers, You Gov’s Editor in Chief, put it: ‘Back in February, it was still considered a near-certainty by the media pundits that the Conservatives would end up significantly ahead. Ed Miliband was unconvincing, the economic numbers coming in were all positive, and now the SNP were wiping out Labour in Scotland: the Conservatives themselves felt a certain inevitability about their return to power after May 7th.’
The election campaign has not turned out like that – the Tories have not gained support. But an attempt has been to explain this by short term factors such as Lynton Crosby’s distasteful election tactics or backlash against the Tory media’s attempted character assassination of Ed Miliband. As Peter Kellner summarised this analysis: ‘Tories pay the price of an inept campaign’.
This view is wrong. History, including election campaigns, is ‘natural selection of accidents’. Far more powerful forces than Lynton Crosby, or David Cameron’s inability to accurately name his supposed favourite football term, explain the failure of Tory support to rise.
To show the deep social processes explaining absence of the anticipated Tory surge the graph below shows the Tories percentage of the vote at every general election since the party’s highest ever score –  55.0% in 1931. The graph is breath-taking in the steadiness of its decline.
Already after World War II the peak Tory vote was 49.6% in 1955 – lower than inter-war levels. It fell to 41.9% by 1992 – the last time the Tories won a majority in the House of Commons. By 2010, when they had declined to being the largest party, but without an overall majority of seats, Tory support was  36.1%. Typically each Tory victory was won with a lower percentage of the vote than the one before, each Tory defeat saw the party’s support fall further than the one previously. 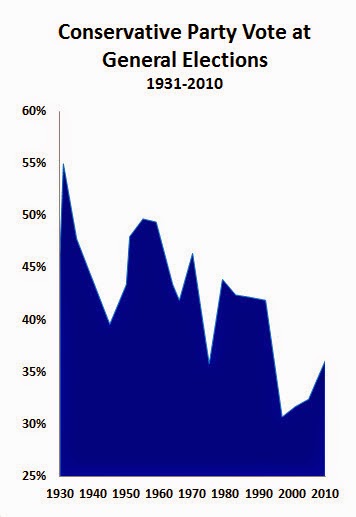 This process is produced by clear social trends. The modern Conservatives originated in the South East of England, outside London, in the mid-nineteenth century following the old Tory Party’s split over repeal of the corn laws. Over nearly a century the Conservatives rose to become Britain’s dominant party by adding, in chronological order, mass support in North West England, London, the West Midlands and Scotland – the current Tory rump in Scotland, with one seat, is in a nation where from 1945-55 Tories actually had more support than England! The Tory decline was the progressive loss of first Scotland, then North West England, then the West Midlands and London.  Now the Tories are back in their original South East bastion.
This trend, based on real elections not polls, was analysed in 1983 in my book Thatcher and Friends and has continued to operate since. It is such powerful forces, operating over more than 80 years, which underlay the failure of Tory support to rise in the election campaign.
Relentless historical Tory decline, of course, does not mean there are no short term shifts. There is a swing factor of slightly under 5% between a Tory victory and a defeat – explained by events nearer the time of an election. But this is superimposed on an underlying erosion of the Tory vote of slightly over 0.2% a year.
Taking these trends, if the Tories were the leading party on 7 May, they would get a bit under 35% of the vote, and if they were the losing party they would get slightly over 30%. The problem is that with a maximum theoretical 35% vote the Tories could not win an overall majority of seats. Failure to analyse longer term social processes caused failure to foresee accurately the course of the election.
Faced with these trends Labour’s policy has shown strategic errors to a higher degree than anticipated. Labour should have understood Tory support could not rise. The key for Labour was therefore to ensure the unity of its moderate left support. Instead relentless minimisation of Labour’s difference with the Tories during the Scottish referendum campaign, the positioning of Labour to the right of the SNP, must count as one of the worst strategic blunders in recent British politics. Without this Ed Miliband could be practicing his victory remarks outside 10 Downing Street. Labour’s ‘steer right’ policy also opened a space for the Greens in England. It is for these reasons that it not impossible the Tories may get a bit over 34% as the largest party, not slightly over 30% as the losing one.
But this does not alter the fundamental trend of Tory decline. Basic social forces, not contingent mistakes, have blocked a rise in Tory support in the election campaign. It is because the Conservatives are incapable of halting their own decline that the paradox is… only the Liberal Democrats can now save Tory Britain!