Incorrect ideas usually reflect a one-sidedness or distorted analysis of a problem, reflecting one or a limited series of factors rather than encompassing the totality of all important factors, their proper weight and their inter-connection. So, the theorists of the Medieval church who insisted that the Sun and the planets revolved around the Earth could point every morning to the dawn and every evening to the sunset. The Earth was the centre of the Universe. Famously, what they could not explain is why Jupiter’s moons revolved around Jupiter or later, more prosaically, why a tall ship disappears gradually beyond the horizon, its tallest mast disappearing last. The theory explained one phenomenon but could not withstand new evidence.

The theory of under-consumption is espoused across a variety of schools of thought, in mainstream economics as well as by some of those describing themselves as either Keynesians or Marxists. It bears the same relation to scientific analysis as the ideas of the Medieval church do to astronomy. This is meant in a strict sense. Under-consumption can be used explain one or more phenomena, but cannot explain an all-encompassing crisis such as the current slump. It does not stand up to the evidence.

In a ‘normal’ or average business cycle downturn it might appear that some combination of household or government spending, or private sector investment or exports start to fall more or less simultaneously and GDP as a whole weakens. (Very often, behind the apparent widespread downturn is the leading role of falling business investment, but that can be set aside here). Some change in fiscal or monetary policy, increased government spending, lower interest rates, or a lower currency and so on may off-set the slump, ‘demand’ recovers and expansion resumes across all sectors of the economy.

But under-consumption cannot explain this crisis (or severe downturns in general). This is shown in a stylised account of the current crisis of the British economy using annual data. Fig.1 below shows the level of GDP, Consumption and Investment in real terms from 2007 to 2015. The data table is shown below for clarity.

The pre-recession peak of activity was in 2007. From that point to the low-point of the slump in 2009 GDP fell by £77 billion. Over the same period Consumption fell by £29 billion and Investment fell by £50 billion. Even though Investment is a far smaller component of total expenditure it fell by far more than Consumption. It was an Investment-led slump. 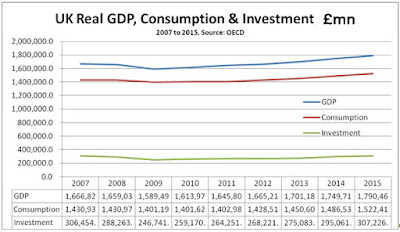 The period since has been the weakest economic recovery on record. Annual GDP only surpassed the 2007 level in 2013. Over that time GDP rose by £34 billion while Consumption rose by £20 billion. But Investment was still the main brake on the recovery, down £31 billion from its peak level.

The most recent data to 2015 show GDP has increasd by £124 billion from 2007. Consumption has risen by £92 billion. But Investment has not recovered, being less than £1 billion higher in 2015 than in 2007. Worse, Investment has begun to contract once more in the latest two quarters. Therefore a GDP increase of £124 billion and a Consumption increase of £92 billion has led to zero increase in Investment, which is now declining.

Consumption has risen in the UK economy since the slump. But Investment has not. The theory of under-consumption, with the policy prescription that boosting Consumption will itself lead to a recovery in Investment has been demonstrated as false. The same pattern is true in the US and the Eurozone economies. Consumption is higher but Investment is flat or lower.

This is because private sector Investment is not determined by the level of Consumption but by profitablity. Without a rise in profits, private investment will not rise. Therefore it falls to the public sector to Invest, or wait until the private sector businesses graciously deign to invest once they see fit, perhaps destroying existing factories and offices and jobs first in order to recover profitability.