US corporate profits fell in the first quarter of 2015. This is the second consecutive fall, technically causing a ‘profits recession’. The nominal level of profits of $2014.8bn in Q1 was lower than in Q2 2012. Profits have fallen to 11.4% of GDP, compared to 12.2% at their pre-crisis peak in Q3 2006. The trend in corporate profits is shown in Fig. 1 below. 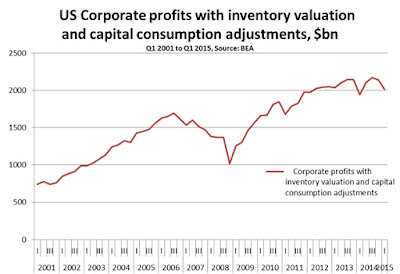 The motor force of capitalist economies is the accumulation of capital via profits, as the name suggests. ‘Demand-led’ or ‘wage-led’ economies are a logical impossibility for the simple reason the wages, or demand, or any other comparable variable follow the production process. There can be no wages or demand without prior production.

Falling profits in a recovery is extremely unusual. But this is the third time this has happened during this weak recovery. In effect, because the economy lacks any great momentum, it is easy for external effects to push profits lower. This could be poor weather, a stronger US Dollar, shipping strikes, weak overseas demand, and so on.

But the effect of a sustained fall in profits is simple. Companies exist to realise profits and will stop investing if profits fall. In Fig. 2 below US corporate profits and US private sector fixed investment are shown in nominal terms for the purposes of comparison.

The Great Recession was preceded by a decline in profits and the fall in fixed investment followed with a time lag. This was a classic profits-led recession, which was partly obscured by the speculative frenzy that continued until 2007 (but which is a recurring end-of-cycle phenomenon). 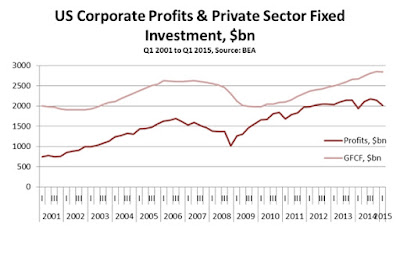 However, until now private sector fixed investment has not suffered a fall in the current expansion despite the preceding short-lived declines in nominal profits. Since the low-point in private investment at the beginning of 2010 there has been an uninterrupted rise in private investment until the final quarter of 2014.

That changed in the first quarter of 2015. Private sector fixed investment fell in Q1 2015. The decline was extremely modest, from $ 2,850bn to $2,841.5bn and could yet be revised away. But there are further causes for concern. In real terms real GDP growth has increased by just €254bn over the last three quarters. At the same the stock of unsold inventories has risen by €257bn. If goods remain unsold, profits cannot be realised and the most obvious course of action is to cut back on production.

Many official and private commentators suggest that the latest weak data is simply a one-off, reflecting extremely poor winter weather in the US. That could prove to be the case. But the combination of rising inventories, falling profits and the new fall in private investment does not point to an improving outlook for the US economy.