George Osborne will cast his latest ‘emergency Budget’ in terms of the imperative to reduce the deficit. This is of course nonsense. The Chancellor has cut the corporate tax rate from 28% to 20% and cut income taxes for high earners while slashing public services, social protection payments, public sector pay and jobs. This is a transfer of incomes from poor to rich and from workers to big business. Like its policy predecessors (monetarism, shadowing the Deutschemark, membership of the Exchange Rate Mechanism, and so on) deficit-reduction is simply a cloak for policies aimed at reducing wages and the social wage in order to boost profits.

The claim for deficit reduction is that ‘we are living beyond our means’. But the target of the austerity policy is the living standards of average households. They are not running a deficit at all. In fact the average household runs a surplus with the government. The average household contributes more revenue to government than it receives. Taking all taxes and all benefits into account, this surplus amounts to £463 per household on average. As there are approximately 26.5 million households in the UK, this means that the household sector ran an aggregate surplus with government of over £12 billion in the most recent year.

To be clear these benefits include benefits-in-kind including a monetary value of education, of the NHS, subsidised travel and vouchers for free school meals as well as all forms of social welfare protections. The data is compiled by the Office for National Statistics, and the key summary table is reproduced below.

Summary of the effects of taxes and benefits on ALL households, 2013/14

The household sector is not ‘living beyond its means’ and there is no imperative to resume austerity on this score. The welfare burden is anything but; households contribute more in direct and indirect taxes than they receive in benefits.

Yet the deficit is real. Part of this is the necessary spending on international aid, policing and other items, but also on wholly unproductive items such as the military budget. But these are not substantial budget items by comparison to pensions, social security, the NHS and so on. As the deficit is real, and the household sector runs a surplus there must be a key sector of the economy that is ‘living beyond its means’, or lazily scrounging off the rest of the society. In Britain that sector is big business. It receives approximately £85 billion a year in what is known as corporate welfare, tax breaks, incentives, subsidies and other transfers.

Research from the University of York suggests that the annual bill for corporate welfare in 2011/12 was £85 billion, on a conservative estimate. This includes all the subsidies and grants paid to business, as well as the corporate tax loopholes, subsidised credit, export guarantees and so on.

This is the real drain on resources. The subsidies help to preserve inefficient and otherwise unprofitable companies at the expense of both their customers and their efficient competitors. If those companies are performing a necessary function but cannot do so without the subsidies, then they properly belong in the public sector.

There is too the question of the deficit which is the ostensible reason for the austerity policy. In the most recent financial year the public sector deficit (excluding the effects of the bank bailout) was £89.2 billion. 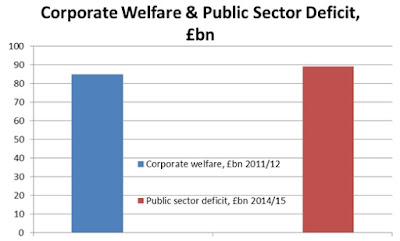 As corporate welfare has been rising since 2011/12 it is safe to assume it accounts for the entirety of that public sector deficit. It is business, not the poor, people with disabilities, women burdened by increased carer responsibilities or public sector workers who should shoulder the burden of the crisis they created.

*Aditya Chakrobortty has provided an excellent update of the latest estimate of ‘corporate welfare’, which now stands at £93 billion. This is greater than the entire public sector deficit in the latest financial year.