The level of public investment is falling in most of the advanced industrialised economies including Britain. The chart below appeared in the Financial Times and has attracted some publicity because it shows this decline in the US in stark terms. 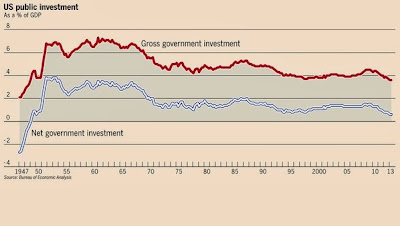 It is set to fall further. The chart below also appeared in the FT piece but was less remarked. It shows the various Budget proposals from the Republican and Democrat parties in Congress as well as the Obama proposals. In all cases the Budget plans are to maintain a trend decline in public investment (excluding defence spending) with just one minority proposal for a temporary increase in investment. 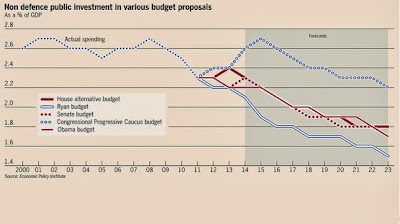 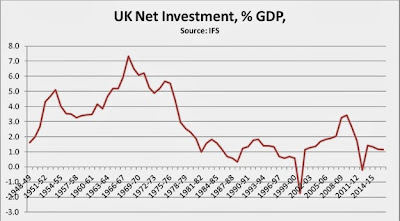 The Coalition government slashed public investment so far that net investment even turned negative in the Financial Year just ended. This is caused by the rate of depreciation exceeding the rate of investment. The very modest rises ahead are IFS forecasts.

But this negative rate of net investment is not unprecedented. Net investment fell even more sharply at the turn of this century as the New Labour government stuck to Tory spending plans. Cuts in public investment exacerbate the cause of the current crisis which is an investment strike by firms. This is especially true as public investment is often directed towards decisive areas such as infrastructure (like flood defences) and transport (such as the rail network). When net investment falls to zero or below, things literally fall apart.

Western governments remain dominated by ideas that became established in the Thatcher/Reagan era and were reinforced by Blair and Clinton. Key to these was an attempted reduction of the role of the state in the economy which was dubbed ‘getting out of the way of the private sector’ in order to boost profits. The crisis of 2008-2009 and the stagnation since have disproved that notion.

George Osborne will produce the latest Autumn Statement in December. It will contain no increase in public investment. Instead he is likely to adopt very stringent future public spending targets in the hope that Labour will commit to them. If it does the Tories will then demand that Labour indentifies where it will cut, which can only damage its own support and further damage the economy.

Tory spending cuts have already wrecked a recovery once. Labour’s own history shows that adopting Tory spending plans was both economically and politically damaging. The scale of the current crisis means that repeating that error would be disastrous.