According to the Financial Times, Donald Tusk, the President of the European Council, played a key role in finalising the negotiations that led to the forcing of the draconian bailout agreement upon the Greek government. In doing so, the former Polish Prime Minister has contributed to the undermining of the principles of democracy and solidarity that are supposed to uphold the European Union. He has also helped to ensure that the European Union moves further away from the very policies that have benefited the Polish economy.

Donald Tusk, whilst Polish Prime Minister, regularly referred to Poland as Europe’s Green Island and the country that had most successfully avoided the recessionary effects of the global economic crisis. Political leaders and commentators, both at home and abroad, have praised the country for its achievements and put it down as a success story of neo-liberal reform and a model for emulation by others.

Of course this image of Poland is a simplified and in many ways misguided one. The country continues to suffer from high unemployment rates and large pockets of poverty; it has the largest percentage of workers employed on insecure contracts in the whole of the EU; many of its essential public services are crumbling; its industrial base has been largely dismantled and up to two million of its citizens have been forced to emigrate in search of a better life abroad. The fact that Poland can currently be considered a success, says more about the dire state of the European economy than it does about the actual situation in the country.

Despite these failings it would be wrong to dismiss the benefits of Poland’s economic growth. The Polish economy has grown by around 22% since the financial crisis in 2008, whilst for example the Greek economy has shrunk by 28% and Spain’s by 5%. So why has the Polish economy enjoyed this relative success?

Over the past couple of decade, the Polish economy has only developed when it has at least partially diverted from the course of neo-liberal reform. Furthermore, it is rarely acknowledged that this has only been possible when European and international institutions have provided the room and means for the Polish government to take a more interventionist role in the economy. This has principally taken two forms: firstly the writing off large parts of Poland’s external debt and secondly the transfer of large EU funds to the country.

The current economic crisis in the Eurozone is centred upon the attempt to transfer the costs of the European financial crisis onto the people of southern Europe and other periphery economies, through the implementation of extreme programmes of austerity that have already caused a social and economic catastrophe in these countries. However, one wonders whether during discussions between Angela Merkel and Donald Tusk over the current crisis in Greece, they ever reflect on the fact that the only two countries to have had their external debt written off in post-war Europe were in fact Poland and Germany. Poland was able to recover from the sharp economic downturn at the beginning of the transition, when in 1991 it made an agreement with the Paris Club (that represented the main state creditors) to reduce its debt in half and three years later it came to a similar arrangement with the London Club of commercial banks. This provided the room for the Polish economy to grow and in 1996 it became the first economy to return to its pre-transition level of GDP.

Poland was able to recover from its second major economic slowdown, after it entered the European Union in 2004. As we can see in the table below, GDP growth peaked at 7.2% in 2007 and although growth slowed again following the outbreak of the international financial crisis, Poland has continued to sustain its course of economic growth. The common explanation given for this was that its previous reforms had created a competitive and dynamic economy that shielded it from the worst effects of the crisis and allowed it to develop even during the most turbulent times in the international economy. As this version of events has largely gone unchallenged, Poland has become neo-liberalism’s symbol of success in Europe. 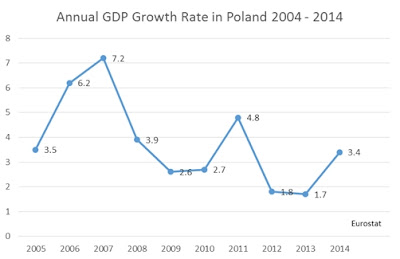 Poland was able to avoid an economic recession due to a unique combination of internal and external factors. Firstly, the country suffered no significant collapse in its banking and financial sectors. Personal debt in Poland remained low and the banking sector relatively well regulated. Secondly, Poland was not as dependent on the inflow of private credit and capital as some other small economies in the region, nor so heavily reliant upon exports. Thirdly, Poland had not joined or tied its currency to the euro and therefore could retain some competitiveness through devaluation. Finally, throughout the crisis, the Polish government continued to increase spending, particularly by raising public investment through utilising the money gained from an inflow of European Union structural and cohesion funds. It is this final point that has been of crucial importance for Poland’s relative success.

Poland found itself in the fortunate position of having large structural and cohesion funds flow into the country just as the international economic crisis began. It is worth pausing to consider what these funds actually are. These are funds that are paid by member states into the European Union budget and are distributed primarily to its poorer regions in order to foster economic convergence. Therefore, they are the complete antithesis of neo-liberal economic orthodoxy as they are based on the principles of government spending funded through economic redistribution from the richer to the poorer regions. These funds are inadequately low, with the European Union’s budget only equalling around 1% of the member states’ total GDP. However, they have helped many of the poorest countries and regions of the European Union to invest in their infrastructure and make some important developmental strides.

Poland was the single largest recipient of European Union funds from the 2007-13 budget, and was liable to receive up to €67billion in structural and cohesion funds. This helped the government to instigate large investments in the country’s infrastructure, particularly in preparation for the Euro2012 football championships. As a share of overall investment, public investment increased from 35% to 43% between 2005 and 2010 and as a share of GDP from 4.2% to 5.7% from 2007 to 2011. The biggest increase in investment was in the area of buildings and infrastructure, which increased from €1.8billion in 2005 to €3.1billion in 2010.

However, as the funds from the first European Union budget began to dry up and the investment surge for Euro2012 came to an end, so economic growth in Poland started to slow, falling from 4.8% in 2011 to 1.8% in 2012 and then 1.7% in 2013. This was caused by a fall in the rate of public investment, which declined from nearly 6 of GDP in 2011 to just over 4% in 2013. Nevertheless this was still significantly higher than the average rate of public investment in the European Union and well above that in countries such as Spain and Greece. Poland’s rate of public investment began to rise again in 2014 as funds from the new European Union budget started to arrive and economic growth rose again above 3%. For the first time in its history the present European Union budget (2014-21) is lower than the previous one. However, Poland uniquely managed to negotiate itself a share of the budget that is higher than that which it had received previously, meaning that it has access to around €500bn (adjusted for inflation), which equals around €1,890 per head, €82 more than that received out of the 2007-13 budget. Despite the continual difficulties in Poland, and the ongoing uncertainty in the European and international economy, this sum should be sufficient for the government to once again increase investment in the economy and sustain a course of positive economic growth.

By the end of this decade these funds will begin to dry up and it is unlikely that Poland will receive a similar inflow of money from the European Union again. The danger is that it will then be in a similar position to that which many countries in southern Europe find themselves today. These countries received even higher levels of European Union funds in the 1980s and 1990s, which helped them to develop much of their neglected infrastructure. However, once these funds were diverted eastwards and then the financial crisis hit, so their economies spiralled downwards. If Poland is to avoid a similar fate it has to work out how it will maintain its rate of public investment when the current European Union budget ends. It should start now by arguing for a significantly enlarged future European Union budget and also support restructuring the debt of countries such as Greece to allow them the room, that Poland was previously afforded, to rebuild their economies.

Unfortunately the actions of Donald Tusk and other European leaders have served to significantly weaken any remaining principles of solidarity and cohesion in the European Union. This will hit periphery economies like Poland the hardest and strengthen conservative politicians in the richer states that wish to pursue more protectionist policies, close their labour markets and reduce the amount of subsidies and funds transferred to poorer regions.