Why Corbynomics can succeedBy Michael Burke

The debate surrounding Labour’s leadership contest is being marred by name-calling and red-baiting. Perhaps this is inevitable but it is regrettable. Britain remains in an economic crisis, which has now entered its eighth year. A more productive course would be to discuss how to end it.

A marker of that crisis is that per capita GDP is still below where it was before the crisis began in 2008, as shown in Fig. 1 below. This remains the weakest recovery on record and the year-on-year growth rate has slowed from 3% to 2.6%. This follows a period from the end of 2012 onwards when no new austerity measures were imposed. Renewed austerity on the same scale as in 2010 to 2012 means there is likely to be a similar slowdown. 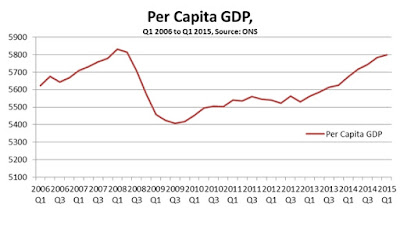 The Tory strategy is more of the same, which one commentator called a Captain Bligh policy, “the floggings will continue until morale improves”. This policy is supported by virtually all the mainstream press. Unfortunately, it is also supported by 3 of the 4 candidates for Labour’s leadership. They abstained on the Tory Welfare Bill the centrepiece of the government’s latest Budget. Only Jeremy Corbyn stands on a clear anti-austerity platform. His economic policy can be found here (pdf).

No-one alive today has ever experienced in a longer economic crisis in Britain. The nearest comparison for the length of the current British economic crisis was at the end of the nineteenth century and the Long Depression. As per capita GDP has not recovered it is extremely difficult for median average living standards to rise. On the contrary, the austerity policy serves to work in the opposite direction by transferring incomes and wealth from poor and middle-income layers to the rich and from labour to big business. So, the latest Budget included a further cut in the Corporation Tax rate to 18% while cutting £12 billion in social protection to the most vulnerable in society.

The Tory policy is straightforward. These transfers of income known as austerity will continue until the business sector is making sufficient profits for it to resume investment. The crisis will be paid for by increasing the rate of exploitation. The austerity mark II of the latest Budget is not because there is still a public sector deficit, as this will fall as it does everywhere even if there is moderate nominal GDP growth. Renewed austerity is necessary because business is not yet willing to fund an investment-led recovery.

The level of investment in the British economy was £295 billion in 2014, exactly the same as the pre-crisis level of 2007. But the economy is actually larger 4.2% larger (keeping pace with population growth, but no more than that). Therefore investment is declining as a proportion of GDP. Consumption, not investment is leading very weak growth and this is not sustainable.

Yet the profit level has also recovered and accounted for 37% of GDP in 2014, compared to 36.1% in 2007. So the Tory policy is not working. Profits have increased by 6.8% in real terms since 2007, but investment is unchanged. Fig.2 below shows the official estimate of the profit rate in the non-financial sector versus the proportion of GDP devoted to business investment. These are strikingly indifferent results for 5 years of austerity policies. The profit rate has only barely returned to its pre-crisis level and is well below profitability prior to this century. The same is true for business investment. Both of these are a recipe for continued slow growth. 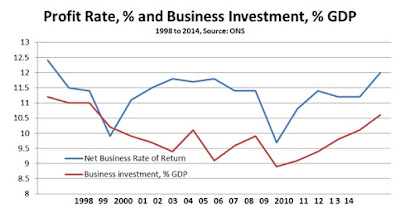 The profits recovery has been greater than the investment rebound. As a result, the extremely high level of uninvested profits has actually grown. The level of uninvested profits in the British economy was £355 billion in 2014, compared to £261 billion in 2007. This is the main brake on a robust and sustainable recovery. Andy Haldane, chief economist of the Bank of England says that firms are ‘eating themselves’ by refusing to invest and instead paying out ever-greater proportions of profits in shareholder dividends. This has been a recurring theme in SEB, and we might add the enormous increase in managerial pay and bonuses which are also a factor. The remainder is deposited in the banks, where it fuels ongoing speculation in financial assets, stocks, housing and commodities.
Unfortunately, it is this Tory strategy that 3 of the 4 contenders for the Labour leadership have endorsed. They have no principle difference with the centrepiece of Tory strategy, cuts to social protection ‘welfare’, privatisations and cuts to corporation tax. The recovery from crisis will be funded by workers and the poor.

This is an extremist economic policy. In the first phase of the leadership campaign it began with an attack on public spending of the Blair and Brown years, placing the candidates not only to the right of New Labour but to the Tories of the time, who effectively endorsed New Labour spending.
Economically, it also places those candidates to the right of Thatcher, who both spent and taxed more than New Labour as a proportion of GDP. It is perhaps worth recalling that main rates of taxation were significantly less regressive even when Thatcher left office in 1990 than they are under the current government (and that many of them were made more regressive by New Labour).

This wholesale adoption of the key planks of an economic policy of a government to the right of Thatcher has been compounded by the refusal to oppose the Tory policy of cutting £12 billion from the ‘welfare’ bill. This is widely understood as a direct attack on the living standards of the poorest and most vulnerable and will directly increase child poverty. The Institute of Fiscal Studies, which is not a hot-bed or radicalism but simply uses the Treasury’s own model of the distributional impacts of Budgetary measures, was explicit in arguing that the Budget would increase child poverty.

Yet these measures were not opposed by the Labour frontbench or by 3 of the 4 candidates for leadership. Even the Blairites used to boast that they had reduced child poverty. It is more than a rhetorical question, but also a vital political one to ask if the Labour Party supports increasing child poverty, what is it for?

Jeremy Corbyn is the only candidate who is not proposing extremist economics. His policy aims to promote growth through increased public investment, funded by progressive reform of the current taxation system, and attacking the abuses of the £93 billion in annual payments for ‘corporate welfare’ in subsidies, bribes and incentives to the private sector.

At the same time he opposes any attempt to make workers and the poor pay for the crisis and rightly argues that the deficit would close naturally with stronger growth. This poses a different way out of the crisis than the one supported by the Tories and the Labour frontbench. His campaign and platform corresponds to a mood inside the Labour Party and wider society. The Tories only won 24% of the electorate’s vote in May because only a minority supports their policy. Labour got fewer votes because it had no alternative.

It used to be the case in the period of economic expansion before the crisis, that to some extent ‘a rising tide lifted all boats’. Even if the labour share of national income declined continuously from the 1980s under all governments, at least living standards for the majority in work were rising. That is no longer the case. The entire austerity policy means that there will be no rise in living standards for the majority until big business sees fit to invest once more. That is, only after having made workers and the poor pay for the crisis and a renewed fall in living standards.

It is this policy which the Labour Party frontbench has signed up to. It is a shock to many in Labour that the verbal commitment to match Tory spending is a real one, even when that means supporting an increase in child poverty. Many are quite rightly revolted by it.

By contrast, Jeremy Corbyn’s economic plan is a moderate, logical and fair one. Big business has the resources to fund the investment the economy needs and as they refuse to invest on a sufficient scale, government will use some of their resources in the interests of society as a whole. Workers and the poor should not pay for a crisis they did not cause. Jeremy Corbyn’s plan for state-led investment offers a way out of the crisis.