.336ZDemand doesn’t create its own supply. A National Investment Bank is needed to direct investmentBy Michael Burke
“The second [pillar of my leadership] is a new economy that puts public investment front and centre stage: in science, technology and the green industries of the future. Instead of Osborne’s economic house built on sand, our focus will be on the reindustrialisation of Britain for the digital age, driven by a national investment bank as a motor of modernisation – and sustainable growth that will slash the welfare bill in the process”, Jeremy Corbyn writing in the Guardian.

The economic policies of John McDonnell and Jeremy Corbyn are blowing away some of the accumulated cobwebs of British post-World War II economic policy. Almost literally, they are a breath of fresh air.

There is an old and rightly discredited idea in economics known as Say’s Law, that in effect supply creates its own demand. It is evidently false, because if it were true it would mean that there were never any gluts of products, and never any unsold inventories of stock.

As Adam Smith demonstrated, we do not live primarily in a barter economy; goods are exchanged for a monetary equivalent which then allows the seller to purchase goods. As a result, the producer must first sell his commodity before s/he can purchase. A failure to sell means an inability to purchase. But it took Marx to point out that capitalists may sell a commodity without any intention of purchasing, because they simply intend to accumulate capital which can be used to pay interest or debt, or it may be consumed, may be put into circulation as new products or may be hoarded as capital. For a capitalist enterprise realisation of profit through the sale is the aim, not the subsequent purchase of another product, although in time of crisis even this sale may not be possible.

Yet there is a modern and widely-held inversion of Say’s Law even among progressives, which effectively argues that all that is needed in the current investment-driven crisis is to increase ‘demand’ (by which is generally meant consumption) and supply and investment will follow. While reversing Say’s Law this notion reproduces its fundamental errors. It rests on the assumption that the economy tends towards equilibrium; all that is needed is the occasional stimulus to demand. As a result, it has no explanation for the crisis itself, other than irrationality (of businesses, or of policy makers, sometimes supplemented by greedy bankers). It entirely ignores the role that profit has in determining business ‘purchases’, that is investment. As a result, it cannot explain why demand or consumption may rise, but investment can still stagnate or even fall.

This is important because it describes the current situation. Consumption has risen since the crisis, but investment has not. Fig.1 below shows the level of real GDP in the OECD as a whole since before the crisis to 2014. Real consumption (final consumption expenditure) and real investment (Gross Fixed Capital Formation) are also shown on the same basis. The data are presented in the OECD’s constant prices and constant PPPs (Purchasing Power Parity terms). 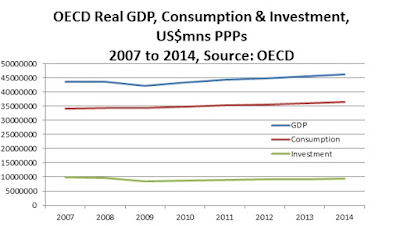 The largest economy in the OECD and the economy held up as the model for growth is the US. It has grown more strongly than many other large economies in the OECD area in the recent period. But the same pattern is evident. This is shown in Fig.2 below. 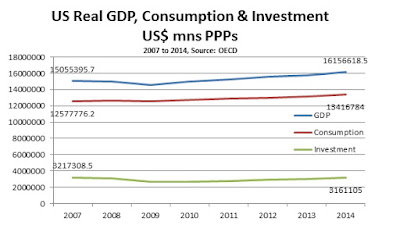 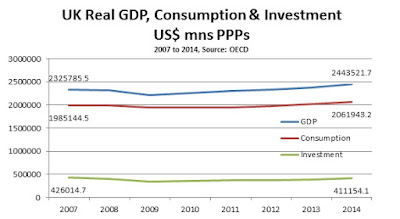 These results are tabulated below, along with the same data for the Eurozone and the Japanese economy.

This will not remain the case forever. At a certain point Investment will recover its previous level before the crisis. In most cases Investment is already somewhat above its crisis low-point. But Consumption is everywhere above its pre-crisis level and has not produced a recovery in Investment. In consequence, in every case the proportion of GDP directed to Invested has declined. As SEB has previously shown, a high or rising proportion of Investment is necessary for high or accelerating levels of GDP growth. As investment in the OECD and its component economies is low and declining, the rate of GDP growth will in general continue to decelerate.

To increase investment, it is necessary for the state to increase it as the private sector has shown it cannot or will not do so in the current circumstances. A key component of that will be a National Investment Bank, and the Labour leadership is right to focus on this. A NIB will allow the public sector to direct investment and to a certain degree to determine its scope. It will so allow the public sector to reap the rewards of the investment it is funding and thereby allow for both improving government finances and further increases in investment. Osborne had a completely phoney Green Investment Bank which was starved of funds. Labour will have a genuine one to raise the level of investment, and therefore growth and living standards.

Relying on increased Consumption to produce a rise in Investment has been tried and failed. This is because demand does not create its own supply. Increased public investment is required and a National Investment Bank is a key mechanism for that.