.880ZOsbornomics has failed. Labour can winBy Michael Burke
The British economy is slowing markedly. This has almost nothing to do with external forces such as China. The slowdown is a consequence of Tory economic policies which have now failed twice. We are about to begin the third failure in succession with the further imposition of austerity policies. By contrast the economic framework outlined by Jeremy Corbyn and John McDonnell has the capacity to develop into a winning alternative.

The GDP data for the 4th quarter show a marked slowdown in the pace of the growth. Fig.1 below shows the pace of year-on-year growth by quarter. The year-on-year data smooths out its volatility from one quarter to the next. On this basis the growth in real GDP slowed to 1.9% in the 4th quarter of 2015. This is a decline from 3% growth in mid-2014 and the slowdown has been continuous since that time. 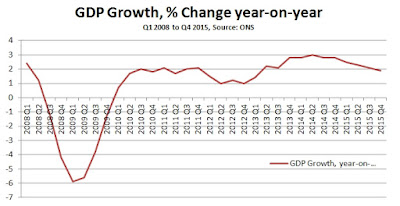 This represents a double failure for Osbornomics. As the chart also shows, the economy slowed significantly after the Tory-led Coalition took office in 2010 as the growth rate slipped from 2% to 1%. This was the effect of the austerity policies.

But the second failure was the so-called ‘recovery’. This was the boost to consumption from 2013 onwards in order to get the Tories elected. It was a classic type of Tory boom (even if it passed most people by). It boosted the price of houses (and so increased consumption) but not house-building (which would require investment).

All consumption-based upturns fade unless they are least matched by rising investment. This is what is now happening in the British economy. Osbornomics has failed twice; austerity slowed the economy to a crawl and the ‘recovery’ was bound to fade because it was driven by unsustainable growth in consumption. Meanwhile, Osborne has made it clear that he will reimpose austerity measures, this time using the pretext of renewed economic weakness he has fostered! So that is what should be expected in the March Budget.

A recovery in investment remains the key to reviving the economy on a sustainable basis. Osborne previously promised a ‘new economic model’ in 2010, which would rebalance the economy. He argued, correctly, that, “The economics profession is in broad agreement that the recovery will only be sustainable if it is accompanied by an internal and external rebalancing of our economy: in other words a higher savings rate, more business investment, and rising net exports”.

He has failed on all counts. The table below shows these three variables in 2008 and in 2014.

A key symptom or consequence of this fundamental failure is the failure to ‘rebalance’ the output of different sectors of the economy. This is shown in Fig.2 below. While the total level of output is above its pre-recession peak the only sector of the economy which has recovered is services. This is entirely in line with the weakness of savings and investment. Production, manufacturing and construction all require fixed investment to increase, or even to stabilise. 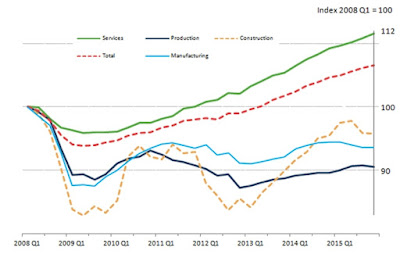 Likewise, a rate of investment which is below competitors and which is not recovering presents an obstacle to any sustained increase in exports. The Osborne tactic of boosting consumption in order to get re-elected tends to work in the opposite direction as imports rise faster than exports.

These fundamental failings explain why Corbyn and McDonnell are right to focus on an investment-led recovery. They are also right to borrow for Government investment and to aim for a balanced budget on current spending, financed by stronger growth and, where needed, taxation.

The failings of the British economy are long-term and since 2010 the Tories have exacerbated them. It is also clear that these myriad difficulties will require both radical and detailed policies from Labour in order to address them. The centre-piece of that programme is a series of policies that will lead to a substantial increase in the rate of investment.