George Osborne’s stated aim once again is the elimination of the deficit. It was also his stated aim at the beginning of the last parliament. He failed spectacularly as by the May 2015 general election the budget deficit was still 3.1% of GDP. Yet the price of this failure is far greater. His policies have caused widespread misery and slowed the economy. Some economists believe that the damage done is permanent and the latest forecasts from the Office of Budget Responsibility (OBR), which Osborne relies on, have slashed its long-term growth forecasts for the British economy.

The reason for this failure is a function of a complete misunderstanding of economics in two crucial respects. Investment, not consumption drives the economy. Secondly, Government finances are not wholly independent of the economy, but interact with it.

In the course of the last parliament Osborne announced total spending cuts amounting to £74.2 billion. Yet total UK public sector current expenditure over the 5-year period from the Financial Year ending in March 2010 to the FY ending in March 2015 rose in real terms (after adjusting for inflation) from £672.8 billion to £673.3 billion.

Asinine right-wing commentators such as John Redwood and others claim that because current spending has not fallen there has been no austerity. The millions of public sector workers who have had their real pay cut, pensions cut or lost their jobs, the people struggling on ever-lengthening NHS waiting lists, the hundreds of thousands of disabled people who have had a variety of benefits cut, the carers who have had to cope with closed Sure Start centres, public sector workers fired, and so on, can all testify that is not the case.

There are three key reasons why cuts in current spending have not led to reductions in the current spending under Osborne. Cuts in one area lead to increased cost pressures. The largest of these is probably the cuts to social care putting pressure on the NHS Budget. Secondly, the economic effects of Tory policies increase Government current spending. So for example, rising in-work poverty puts upward pressure on in-work benefits, and rising housing costs increase the subsidy to landlords from housing benefit. Thirdly, Osborne has used Government finances to promote consumption, especially in housing as part of his re-election strategy. This includes ‘Help to Buy’ and a number of other schemes.

Fig.1 below shows that Public Sector Current Spending has only fallen modestly from elevated levels associated with the crisis (pushed higher by rising unemployment payments and other social protection). It is still way above pre-crisis levels. By contrast, it is government investment that has been slashed. This is a key contributor to weak growth and worse-than-expected government finances, including stubbornly higher current spending. 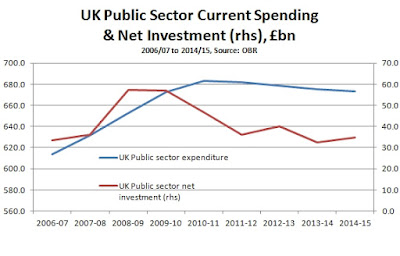 Growth is the key

A very clear exchange took place on BBC Radio 4 on the morning after Osborne’s Budget. The interviewer wanted to reduce John McDonnell’s policy focusing on investment to a secondary matter. Justin Stewart said, “We’ll come to investment. But you can’t balance the current budget with investment can you?” John McDonnell replied, “Yes you can. You raise the level of growth and so tax revenues go up.” This is precisely correct (and the interviewer was somewhat lost as a result). It is also the case that current budget outlays will fall too with higher investment-led growth as more people are in better-paid jobs.

The Labour contrast with Osborne is stark. As Fig.1 shows public sector net investment has been slashed under the Tories. The latest Budget shows the plan is to cut it further despite all the parading in high-vis jackets. In the years 2018 and 2019 the intention is that government capital spending will fall outright. As business investment has also been much weaker than forecast, the Tory government’s actions exacerbate the key failing of the economy. There can be no serious hope that productivity will increase or that exports will grow significantly with falling investment.

In fact, Osborne and the OBR seem to have given up on hope. Their previously over-optimistic forecasts have given way to a much reduced long-term growth outlook. But they have failed to understand cause and effect. Austerity halted a mild recovery in business investment and cut government investment outright. Hardly anyone, except Osborne is surprised then when growth is weaker as a result and government finances do not improve as expected.

The alternative from John McDonnell and Jeremy Corbyn is correct, borrowing for investment while aiming to balance the current budget over the business cycle. It should also be clear that this is the sustainable foundation of decent public services. Rising investment will primarily impact government finances by raising the level of current tax revenues, and to a lesser extent reducing government current spending. The greater the sustained level of investment, the greater the funds available for public services. A third impact of rising investment will be to increase government capital revenues, but this is a relatively small effect compared to the first two effects.

This issue is crucial in generating popular support for an investment-led programme and will be addressed in future pieces.