In order to defeat Osbornomics it is necessary to understand it. A central tenet is that the private sector is the key to prosperity and that therefore everything possible should be done to promote and encourage it. The state should shrink in order to release the inherent dynamism of the private sector. The argument runs that it may be that some people fail temporarily so some sort of safety net may be necessary, if affordable. In this framework, if it is necessary to cut support for disabled people and the poor in order to fund tax cuts for high earners and business, then so be it.

The attack on disabled people has rightly been the focus of hostility to Osborne’s Budget. But this is not an isolated case, as all those who have suffered those cuts can testify. This has been a repeated pattern of Osborne Budgets, supported by all Tory and LibDem MPs beginning in 2010. The right of the Labour Party has had no significant disagreements with it.

At the same time, the long-term decline of the steel industry has turned into a full-blown crisis. In a very useful report the Institute of Public Policy Research (IPPR) debunks the myth that the crisis is due to ‘dumping’ of steel in the EU. The UK loss of market share in core industries producing intermediate goods, such as steel, is twice the rate of the industrialised countries as a whole over the long-term. Despite alleged ‘dumping’ by Chinese firms in Europe, German steel production rose by 2% in 2015.

The IPPR report shows that all of these industries combined have suffered a devastating reversal. While by the end of 2014 UK GDP had recovered by 4% from its pre-crisis level in 2008, the producers of core materials used in manufacturing and construction were still 20% below their pre-crisis level. They are in a deep crisis.

These two trends are linked in policy terms; the repeated attacks on the poor and those who should be entitled to support, combined with a decline in key industries. In this way, the central proposition of Osbornomics is revealed by the most striking simultaneous giveaway in the 2016 Budget, which was the further cuts in the tax rate on corporate profits, as well as the cuts to Capital Gains Tax (CGT).

Osborne has cut CT so that it now stands at 20%. In the 2016 Budget the announced cut to 17% is in effect funded by attacking disabled people and cutting public services sharply in real terms (after adjusting for inflation). He also further cut CGT. It should be remembered that New Labour also cut both CT and CGT.

All of this has been cast in terms of boosting investment and ‘freeing the private sector’. It is nonsense. In Fig.1 below the level of CT is shown against the proportion of business investment in GDP. It also shows the projected level of CT rates that Osborne has announced for future years. 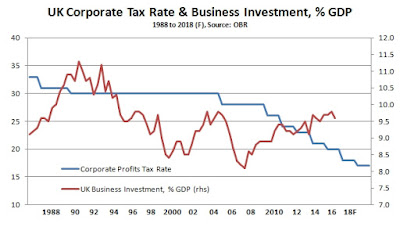 Both the tax rate and the investment rate have been in a long term downtrend. The high-point for business investment over the period was in 1998 and 1999 when the CT rate was 30%. Cutting taxes has not spurred investment. The new freedom for the private sector is a greater proportion of its post-tax return is free to fund excessive boardroom pay, share buy-backs and to fund speculation in financial markets, including housing.

Britain has an investment crisis. This has led to a crisis of production and of jobs. But cutting the CT rate has done nothing to address it as business investment continues to remain weak. All other things being equal, the cut in the rate from 28% to 20% has reduced public sector tax revenues by approximately £30 billion in the current Financial Year. If the private sector will not invest, then the public sector must. Any measures to begin to reverse this unproductive cut in taxes will lead to greater revenues available for public sector investment.

Steel should be renationalised and provided with large scale investment via a National Investment Bank. This and an all-round programme for investment is the way to generate growth and prosperity. On this basis there would be no more cuts to the entitlements of disabled people and others and the cuts to incomes can be restored.