No pointers to a successful BrexitBy Tom O’Leary

Brexiteers’ crowing over the latest GDP data and the decision by Nissan to invest further in its Sunderland plant is utterly foolish. The negative impact of the vote will take place primarily over the long run, will be felt in terms of trade and above all in investment, and will accelerate after Article 50 is invoked and most especially if Britain actually leaves the EU and the Single Market, scheduled now for some time in 2019.

Yet even in the latest events there are clear signs of the problems that will mount. As a series of company announcements have already shown, the first is that prices will rise. By how much is not solely due to the 17% devaluation of the pound but will also be determined by the trend in global commodities’ prices. The certainty is that prices will be much higher than they otherwise would have been, lowering living standards and real incomes.

The GDP data also point to the problems ahead. Aside from the services sector, the rest of the economy fell into recession, as shown in Chart 1 below. Taking the growth rate from a year ago, services have expanded by 3%. But industrial production is just 1.2% higher, manufacturing is 0.4% lower, construction is down 0.2% and agriculture is 1.4% lower. 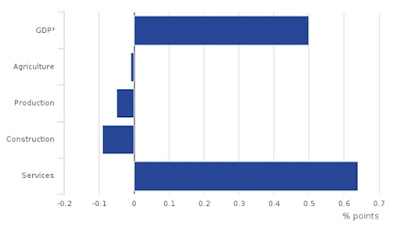 Source: ONS
If the services sector itself is examined, it can be seen that the hotels, restaurants (the sectors that benefit from tourism) grew rapidly and along with the business services and finance. These two benefited from the sharp devaluation of the pound and the interest rate cut by the Bank of England. Together these two sub-sectors contributed 0.3% to GDP growth. The rest of the economy grew by just 0.2%.

Over the long run, as Nigel Lawson was forced to discover, it is not possible to build a ‘candyfloss economy’ based entirely on services. Not only are the productive sectors high value-added, high productivity and higher paid, without them an economy becomes entirely subject to the gyrations of the world economy and world prices, the weakest link in any general crisis. As a result it is not possible to build prosperity over the long without manufacturing and production. In fact the entire British long-term economic crisis that culminated in the referendum vote is characterised by this decline of the productive sectors and the over-dependence on services.

The Nissan deal has been kept secret. The Times reports that Nissan was provided with a written assurance that it would face no detriment in its trading position in the UK. There is speculation that this could be financial compensation for any tariffs, a promise that the car industry will be exempt from tariffs, or a pledge for indirect subsidies via R&D or similar areas.

One of the fantasies of the Brexiteers is that leaving the EU will allow the UK to set its own rules. The ‘hardest’ Brexit of all is to fall back on WTO rules. But there is a clue in the name. The WTO has, among other things a plethora of ‘anti-dumping’ rules. Any subsidy to any particular firm or sector would breach those rules, leaving the UK open to penalty under WTO rules and anti-dumping suits by any country which was importing those goods. The same would apply to any government providing R&D subsidies. Nissan will be aware of all this, even if UK ministers for Brexit are not. It can only be imagined that it has received a promise that the government will do all it can to remain in the Single Market. We shall see.