What is at stake in France?By Tom O’Leary

Although they are broadly similar in terms of GDP and population size, France is a more important country than Britain in the EU. Any move by France to exit the EU and the Single Market would have a far greater impact than the self-inflicted damage to living standards in Britain arising from Brexit. As a founder member of all the EU’s forerunners and an economy more deeply integrated into the Eurozone economy, a French departure would have a shattering effect. At the very least a number of other countries could also be expected to depart, including Spain, Portugal and Italy.

Marine Le Pen is vying for the lead in the Presidential race, and she proposes a referendum on a French exit. The continued strength of Marine Le Pen’s far right and overtly racist Front National in the opinion polls is evidence of a deep malaise in French society. The FN continues to record about one quarter of the vote, while many other candidates also play a similar anti-immigrant and anti-Muslim tune in a lower register.

France, like many European countries including Britain, does not have an immigration crisis. It has an economic crisis in which immigrants and minority ethnic and/or religious communities are used as scapegoats. Without its migrants, and the daughters and sons of migrants, the economic crisis would be even more grave.

The road to socialism is very unlikely to lead through the EU. Under certain circumstances, where a socialist programme of taking control of the means of production to increase investment was being offered, exit could lead to far better outcomes than sticking with the EU. Even then, the new government would need great skill in minimising the disruption to trade. But of course, this is not what the overtly racist Le Pen proposes, but nor does any other candidate.

Like every other phenomenon, the analysis of current economic situation must begin from evidence, not myth or rhetoric. The outline of the crisis is evident from Chart 1 below. It shows the change in real GDP since the crisis began and the change in the main components of GDP. 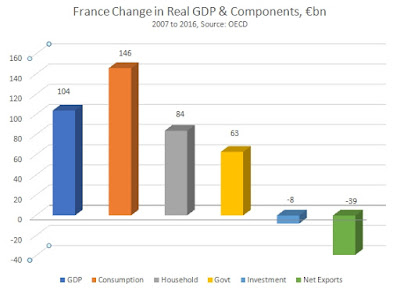 Real GDP has risen by just €104 billion since the crisis and after 8 years is only 5.2% higher than in 2007. This is equivalent to an annual average growth rate of little more 0.6%. Once again, we find that Consumption growth has been unable to lead the economy. Consumption has risen more strongly than GDP itself. Contrary to widespread belief, Government Consumption is also higher. It has risen by 13.8% over the period and in percentage terms is actually the strongest component of all.

The drag on GDP has come from the weakness of Investment, which has fallen by €8 billion since 2007. This combination of rising Consumption and falling Investment has led to a widening trade deficit. As falling Investment means declining competitiveness any increase in consumer and other demand is disproportionately met by rising imports. Statistically, the widening deficit on net exports has been the biggest factor subtracting from GDP.

The fall in Investment has also been reflected in a decline in both industrial production and construction over the period. The French crisis is a crisis of investment.

In the corresponding 10-year period up to 2007, Investment rose by 39%. Simply in order to achieve that pace, Investment would need to rise now by €90 billion, equivalent to 4.2% of GDP. It would then need to continue to rise faster than GDP. The private sector, which accounts for the bulk of Investment in all capitalist economies, is either unwilling or unable to raise its level of Investment. French profits have not even kept pace with meagre GDP growth, up €63 billion in nominal terms since 2007 compared to a €280 billion rise in nominal GDP. As a result, the public sector is the only other agent that could increase Investment.

Is this even possible within the EU and operating under the EU Commission’s ‘Trimester’ of national budget oversight, the ‘six-pack’ and the strictures of the ECB?

The reality is that no country has tried. While a number of countries have a higher proportion of GDP directed towards Investment than France, they have all been cutting Investment. In virtually every European country (including the UK) public spending has been rising (on Consumption) while public sector Investment has been cut.

What would be required is a 180-degree turn. Public spending should be maintained, but public Investment should be very substantially increased. In terms of the main candidates, Le Pen says nothing coherent about the economy at all. Her entire programme and campaign is racist scapegoating. Macron says he would initiate a €50 billion public investment programme. But this is just €10 billion a year, when €90 billion and more is required. At the same time he would tear up worker protections, and slash taxes for businesses and the rich. This would lower living standards, and probably increase the public sector deficit, with even the meagre investment pledge the first likely casualty. Fillon’s policies are similar, if more right wing. He talks of €35 billion in public investment, but as this is conditional on private investment it has more of the character of a subsidy than an investment programme. By contrast, the only left candidate in the race is Melenchon who would invest a much more substantial €102 billion.

In EU terms, France is a very important country, the second most important after Germany. As a French exit risks destroying the entire EU, it has a very great weight within the EU and could use that for its own benefit and for the whole of Europe. A menu of measures could include:

Naturally, this is only an outline programme, and those with specific knowledge could improve and refine it substantially. It should be accompanied by a series of measures boosting wages, capping prices, and improving public services to ensure living standards rise and to bolster public support. The tax revenues from rising investment-led activity can be used to fund these.
What then, if the EU Commission and the ECB said no? In that event, the logical course would be to begin to implement these measures on a national basis. This would have a strongly positive effect on growth, albeit diminished if they are not EU-wide.
There would be huge risks if there was an attempt to sabotage this series of reforms. France could refuse to pay all fines or penalties that might be imposed by the Commission, secure in the knowledge that its bargaining position was greater than almost any other EU country. If then the ECB cut French banks adrift from its liquidity operations (as it did with Greece), this would be taken as a notice to quit the Euro.
In that circumstance, the EU institutions would be trying to prevent polices which were evidently in the interests of the overwhelming majority of the population. The French government would be trying to enact them. At that point, would the institutions risk the entire European edifice in order to block sensible reforms? This is an unknown, as it has not yet been tried.
Share